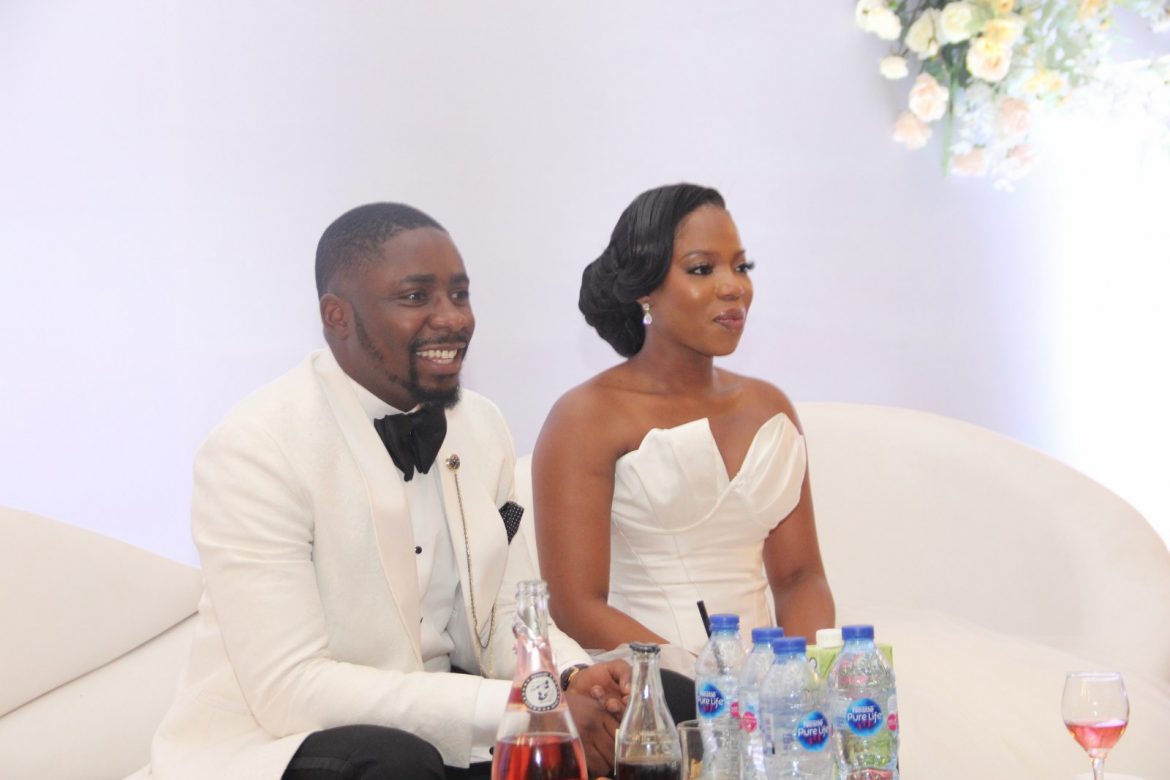 On Saturday,11th December 2021, Otunba Robert Akinmoladun and his pretty wife, Dr Mrs Grace Akinmoladun, came together with the Campbell family to celebrate the joining of their children, pretty Jadesola Campbell and Adedamola Akinmoladun.

This beautiful affair started on Thursday,9th December 2021 in Havilah Event Center, located at Victoria Island, Lagos, where the beautiful couple was first joined in a colourful traditional ceremony. The celebration went on to the Royal Oaks event center, in Lekki, Lagos, where guests were thrilled last Saturday.

The event venue was dressed like a fairy tale party by Ethal Events, in conjunction with Events by Mide, and crew, while other vendors had their props set in strategic places.

The reception started with the arrival of guests dressed in beautiful aso ebi materials. MC Mide Coker was the appointed master of ceremony who took no time in ushering in the bride’s family. Prof Oladapo and Mrs Ibironke Campbell danced in, elegantly dressed, accompanied by friends and family members.

Right after this, the Akinmoladun danced in. Otunba Robert Akinmoladun dazzled on the dance floor, with his dance steps,as his joy knew no bounds. As the groom’s family took their seats on the high table, the Chairman of the day, Prof Francis Abayomi and his wife were invited to the High table amidst dancing and cheers.

Finally, the Bride and Groom were called into the party. They had the most beautiful and handsome friends dance in before them, as guests stood to capture the moment.

After taking their seats on the stage, MC Mide Coker went right on to play some games.

The first game was Gele tying, which had the bride’s maid tie gele on the groomsmen. This show got everyone hooked to the stage as they kept on laughing and cheering.

Popular Comedian, Frank Donga was also not left out in the fun. After this, the Scavengers Game came next. This time, the groom’s men and bride’s maid were to go into the audience to pick an item requested by the groom and his bride.

After this, the bride and groom shared their first dance in the midst of beautiful music played by Dj Toh Bahd.

After this beautiful moment, they proceeded to the cake stand to cut their Wedding cake and share amongst them.

Shortly after this, the Father-Daughter dance, came up after, which Adedamola Akinmoladun danced with his mother,whom he addressed as “Iye Bobo”.

After this Mc Coker once again called on the bride’s maid and groom’s men to play the last game. After this, Blossom Band played various genres of music, as both family flooded the stage to dance.

This marked the beginning of the after party.