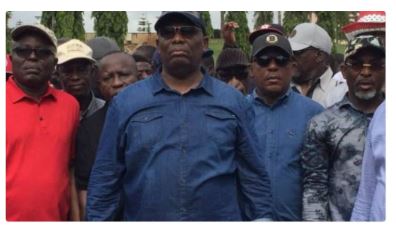 The National Chairman of the Peoples Democratic Party, PDP, Uche Secondus on Thursday led a protest to the National Assembly.

The protest was against the alleged attack on the Ekiti State Governor, Ayodele Fayose by operatives of the Nigeria Police Force, yesterday at Ado-Ekiti, the state capital.

Recall that security operatives had on Wednesday blocked the entrance to the State’s Government House in Ado Ekiti, the state capital.

The operatives had allegedly shot teargas canisters which affected Fayose.

Commenting on the attack, Fayose had claimed that he was slapped by police officers.

But, speaking during the protest, the PDP Chairman said he led the delegation to submit a petition to the lawmakers on the alleged action of the police.

Secondus was accompanied by members and leaders of the PDP.