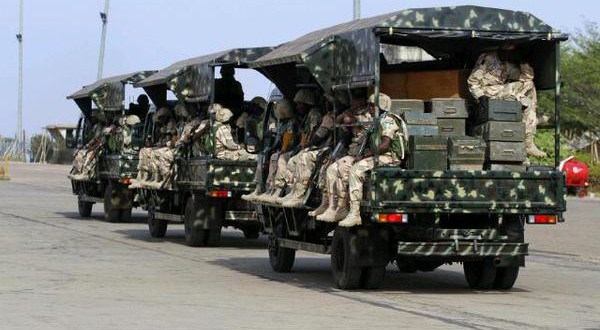 A soldier on special assignment in Monguno Local Government of Borno State to fight Boko Haram insurgents has been arrested alongside another suspect for alleged armed robbery and car snatching in Yola.

The police spokesperson in the state, Sulaiman Nguroje, on Tuesday, said the incident happened around 1 a.m on Tuesday in the Adamawa State capital.

“The suspects accosted a lady along Target Junction. They pointed a gun at her and asked her to surrender the car, a Toyota Camry, which she obliged.

“Luckily, the matter was reported to policemen on duty nearby along Target Junction who collaborated with vigilante operatives and arrested the suspects.

“We were able to recover the snatched car, an AK47 rifle and 35 rounds of ammunition from the suspect,” Mr Nguroje said.

Fielding questions from journalists, the soldier who identified himself as Dampa Hyellambamun said he was on special operations in Monguno.

“I got a pass to come to Yola from my base in Monguno and the pass has expired since August 10, 2019.

“I was given a gun without salary and allowance. What do you want me to do when I’m on the verge of starvation? We have not been paid for months,” he said.

Burna Boy’s ‘Anybody’ Used As Soundtrack In American Series ‘Ballers’