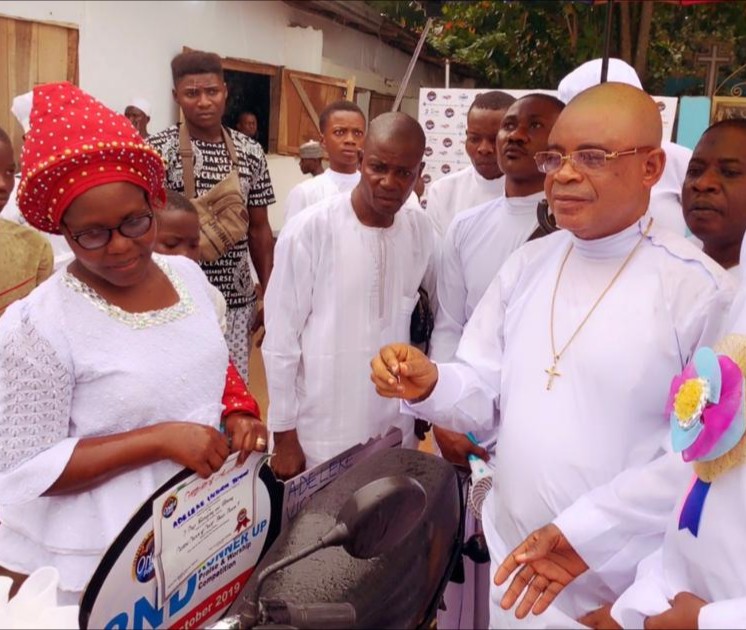 In appreciation of the God’s faithfulness, a celebrated Celestial Church of Christ Pastor, in-charge of Onala Parish, Dr. Kolawole Olakanmi last weekend rolled out drums and gave out cash prizes including a car & motorcycle to people during a special thanksgiving event held at the Ore-Meji church premises.

He was full of thanks to the Almighty God while speaking with newsmen after the event saying the date was significance in the history of the church because it was a victory over the persecution against the church of Lord.

The Shepherd, recalled how he was arrested alongside nine other members of the Church, in 2012 when the former Governor in the state, Ajimobi was embarking on a demolition of what they called “illegal” structures throughout the state, especially the state capital
“We are most grateful to God who delivers this ministry from the hands
of persecutors. I remembered how I showed them the copy of the court
injunction, but their leader who brought bulldozers here told me that
the order was from the governor.
“He even told me that the order of the governor supercedes any court
injunction and in the process, I was ordered to be taken into their
vehicle, locked up before my other members were arrested without any
charge. We sued them and got favourable judgment after a protracted
court case.
“You can see that there nothing too big to give out in appreciation of
our Lord that never forsake us, the reason of our thanksgiving is
limitless and we shall continue to praise and thank him in every way
that comes to our minds,” Prophet Olakanmi told the newsmen.
Cream of top clergymen in attendance includes
Most/sup/Evang. Jacob Deji Nunayon, Bishop Kayode Williams, Ass/ven/sup/Evang. Prophet S.B.Balogun(jp), Prophet Olabode Odunayo (Baba Love),
Evang Funmi Aragbaye among others.
Part of activities held during the special thanksgiving event was praise singing competitions where Fayemi Olayemi Olubunmi, a member of Winners Chapel
otherwise known as the living Faith Church emerged overall winner and
was presented with the key of Toyota Sienna.
Other winners includes: Adeleke Victoria Toyin who emerged as a
runners-up and carted home brand new Okada Motorcycle, while Psalmist
Adekola Adeoye ended up as the second runners-up and was presented
with hundred thousand naira