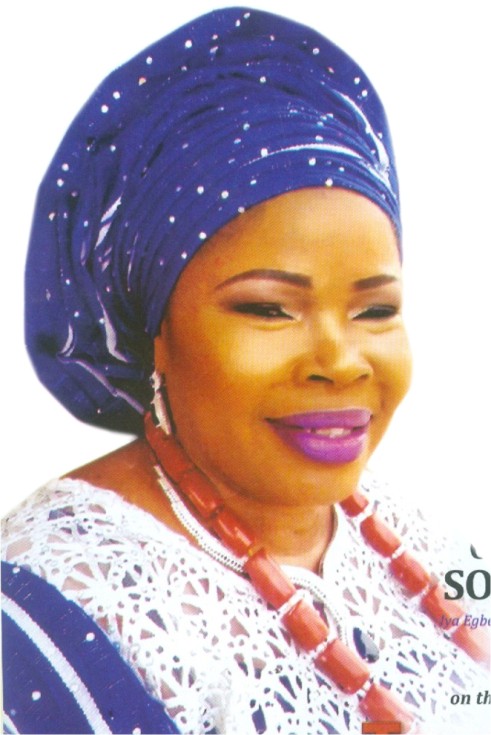 All roads will lead to Ibadan on Sunday 28th of April, 2019 as Nigeria’s Leading Rice merchant, Chief Mrs. Ibilola Solaja, popularly called, Madam Jumlar will be hosting a show stopping wedding for her son, Olayinka Bowale Solaja. The grand wedding will hold at Jogor Center in the Ring Road, Ibadan. Reception follows immediately.

From what City People gathered, the planning for the Engagement & Nikkah ceremony between Bowale and his beautiful bride, Adedoyin Zaynab Salami, is in top gear. The bride is the daughter of Alhaji Fatai Kola Salami & Alhaja Balikis Olaide Lawal. Leading events planner, Victoria Folarin has taken full charge of the decoration and  planning. And top event vendors have been contracted to play key roles at the wedding, like Astoria and Piesces Caterers, handling food.

Already, 2 different Aso Ebi’s have been picked, ranging between N50,000 and N300,000. And guess what, there is a scramble for the aso ebi, as practically all her friends want to buy. Also a powerful Planning Committee, made up of some top society women have been set up. And they have been meeting day and night to make it a hitch free Nikah & Engagement. We can also tell you that Madam Jumlar is not sparing any amount to make her sons wedding the mother of all weddings in 2019. She has given all event vendors matching order to make the wedding a memorable one.

The 1,500 Guest list reads like a comprehensive list of all the who is who in Nigeria. About 10 Governors have confirmed attendance. About 15 Senators are coming and close to 25 House of Reps members have indicated interest in storming the ceremony. Everybody likes Madam Jumlar. City People gathered that all the political juggernauts across the country are storming Ibadan to honour Madam Jumlar who every one says is “a nice woman”. The story is that she is there for everyone both old and young.

Many society women across Nigeria would also be attending to support one of their own. Among society women, Lady Jumlar is seen as the Queen of Society women. And she has been there for very many of them. That is why they all gravitate towards her. Of course, a lot of Commodity and fabric merchants would be trooping to Ibadan that day to support the woman they call The Queen of Rice business in Nigeria. Let’s quickly tell you that she is the biggest rice seller in Nigeria today. City People scooped that the main IV for the VVIP was printed abroad and it comes in a big package.

At the recent City People Awards For Excellence held at the Lekki Colisieum, one of those honoured at the event was Chief (Mrs) Ibiola Solaja, popularly called Madam Jumlar. Although, everyone calls her Madam Jumlar, but her real name is Mrs. Ibilola Aduke Solaja. She is a successful Lagos businesswoman. She is one of the biggest Rice Merchants in Nigeria and the Iya Oloja at Dalekan Rice Market. She was born in August 13, 1955 to the family of the late Chief & Mrs. S. S. Banjo in Ijebu Igbo and she started her Primary education at Amutebu in Ijebu Igbo and finally obtained her 1st School Leaving Certificate at Saint Saviour Primary School, Ikenne in the year 1967. She started her secondary education at Girls Grammar School, Ijebu Igbo, and later proceeded to Mayflower College, Ikenne to complete her studies where she obtained her West African School Certificate in the year 1971. Later, she proceeded to Ushi Ekiti Teachers Training College, Ushi Ekiti in the former Ondo State now Ekiti State in the year 1974. She briefly worked at Macjob Commercial College Ibara, Abeokuta as a Teacher and later joined the Presidency in August, 1978.

While in the Presidency, she was trained as intelligence personnel. She attended various surveillance and intelligence courses overseas and came back to attain the level of a top officer. She served for 19 years as an intelligence officer before she retired in August, 1994.

After her retirement, she started a trading business under a registered name of Jumlar Nigeria Limited and has since been in the business of importation and distribution of Rice, Vegetable Oil, Sugar and Cement with a network throughout Nigeria including the Federal Capital Territory. She has successfully managed the business over the years and has given birth to several other businesses that cut across Oil sector, Construction and Farming. In 2005, she travelled to Jerusalem to celebrate her golden jubilee, there she was honoured with Justice of Peace (JP). Also in 2009, she travelled again to the holy city and was honoured as an Ambassador of Peace.

In addition to her business carrier, she attended several management courses, home and abroad in order to acquire more management skills. She has several awards to her credit, many in her business and from churches, among which are, the Iyalode of Emmanuel Church, Ijebu Igbo, the Olori Oniresi of Daleko Market, the Yeye Oba of Ofa Kingdom, and the Ajitowobaje of Ishan Kingdom in Ishan, Ekiti State. She is blessed with children among who are, a present member of Ogun State House Assembly in person of Hon. Bowale Olayinka Solaja and Ms Olajumoke Solaja, the Special Assistant to the wife of Oyo State Governor.