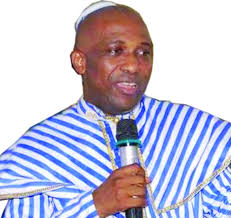 The Leader Of INRI Evangelical Spiritual Church, Primate Elijah Ayodele as usual has been mentioned for foretelling some of the events that took place over the weekend.

One of them is the unfortunate plane crash that took place in Tanzania yesterday. News reports on Sunday had it that a Tanzanian commercial flight operated by Precision Air crash-landed in bad weather in Lake Victoria, killing 19 people. This is a sad occurrence that was forewarned by Primate Ayodele in his annual book of prophecy titled Warnings To The Nations.

In the Aviation section of the book, Primate Ayodele noted that he foresees a plane crash in the western world and some parts of Africa. This prophecy was fulfilled yesterday when the crash happened in Tanzania, an African country.

Also, the president of Ghana, Nana Akufo-Addo is currently faced with the toughest time in power due to the economic crisis experienced in the country. Yesterday on social media, a trend #NanaMustGo surfaced and what this means is that the citizens are asking him to resign his position. There was also a massive protest in the country requesting for the president’s resignation. This has also fulfilled the multiple prophecies of Primate Ayodele to Nana Akufo-Addo.

In his annual prophecy book which was released in July 2022, Primate Ayodele noted that there will be economic challenges in Ghana and that the people will protest against his government because of economic issues. Also on his tiktok account, Primate Ayodele noted that Ghana currency will crash, while warning the Nana to put the country in order to avoid a protest that will chase his government out.

The president of Cameroun, Paul Biya celebrated 40 years in power yesterday and this has been met by serious backlashes as youths in the country called for an end to his rule in the country. Still on his tiktok account, Primate Ayodele warned Paul Biya to resign some weeks ago if he wants peace in the country. He also noted that the people are angry and want him to resign, this has just begun the fulfilment of the prophecy. 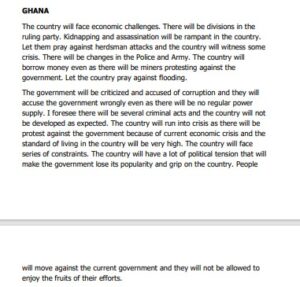 The staffers of Kenya Airways have embarked on strike, leaving several passengers stranded at the airport. Primate Ayodele in his prophecy book had revealed that some airport workers and airline staffers will go on strike, this has also been fulfilled.

Why VP OSINBAJO & Wife Are Not Campaigning For TINUBU