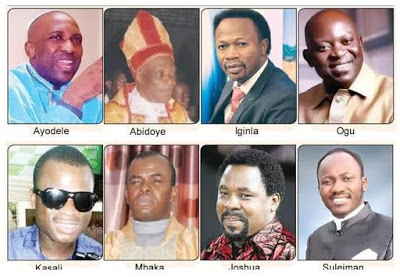 It’s a new year and one thing we expect always are prophecies from great men of God to usher us into the new year. These prophecies tend to direct us, perhaps to know what we should be weary of in the coming year or what to take a liking to.

The Punch newspaper has however collated some of the prophecies by popular great men of God in Nigeria which did not come to pass in 2016. Check them out below..

1. Buhari may be killed – Father Mbaka
Earlier in 2016, controversial Catholic priest and spiritual leader of Adoration Ministry, Reverend Fr. Ejike Mbaka, raised the alarm over what he says is a plot to assassinate President Muhammadu Buhari in 2016.

He said:- There will be a plot to assassinate President Muhammadu Buhari in 2016. “Many people are planning, as it is revealed, to kill Buhari. There are many plans on how to eliminate his life so that corruption, embezzlement will continue.

By the end of this year, Buhari will expose the names of the people who looted money meant for our roads.

Many people are going to suffer. We should all get ready. But after the suffering, we will all smile.”

But throughout year 2016, there were no reports of plots to kill the President.  Also, the president did not expose the names of looters. Instead, Vice-President Yemi Osinbajo explained that the government did not name the looters because doing so would jeopardize ongoing investigations.

2. New STD will emerge — Pastor E. A. Adeboye
Part of the prophecies that the general overseer of the Redeemed Christian Church of God, Pastor Enoch Adeboye, gave on January 1, 2016 was a new s*xually transmitted disease would surface in 2016.

This did not happen. The only new virus that made headline last year was Zika virus – a mosquito-borne flavivirus.

3. A woman will win US election — T.B Joshua
The general overseer of The Synagogue Church Of All Nations, T.B Joshua, got the attention of everyone in the world when he predicted that Democratic Party candidate, Hillary Clinton, will win the US presidential election but alas, Republican candidate, Donald Trump, won!

During a service, Apostle Suleiman expressed distaste over the bill, noting that such amounted to suppressing the freedom of religion.

The state government has not revoked the bill although the noise over it has died down. But el-Rufai is still living despite the non-revocation of the bill.

Also, Apostle Suleiman predicted that except Americans prayed, President Barack Obama would seek third term with a likelihood of the presidential elections not holding. Well, you know the end result as there was no such case of desire for tenure elongation by Obama.

Obama even campaigned for his party’s (Democratic Party) candidate, Hillary Clinton, who lost to Trump. At no time, before or during the electioneering was any issue about seeking third term in office raised.

Some of the predictions came to pass while one of the most controversial of them was that the Queen of England may die.

He said: “The Queen of England should pray for her health. I see strong challenge and should pray to see the end of the year.” The Queen had a spectacular 90th birthday celebration in the year in review with no major health issue.

Also, Prophet Iginla also said there will be a major stampede at a religious gathering in Zambia which would claim lives.

The blind prophet prophesied that Vice-President Yemi Osinbajo would go missing after leaving a meeting.

Well, in the year in review, Osinbajo toured the country and attended several meetings on behalf of the president and nothing happened.

He also said the APC would win the governorship election in Rivers state. But the opposites are what happened. Fayose was not removed from office, and Governor Nyesom Wike of the PDP is still in charge of Rivers state.

What happened, why didn’t these prophecies come through?

Prophecy Galore: See Top Prophecies By Top Nigerian Pastors In 2016 That Didn’t Come To Pass was last modified: January 3rd, 2017 by Arinze Ago

Wow: Checkout how this 2-year-old boy saved his twin from being crushed by drawer [VIDEO]