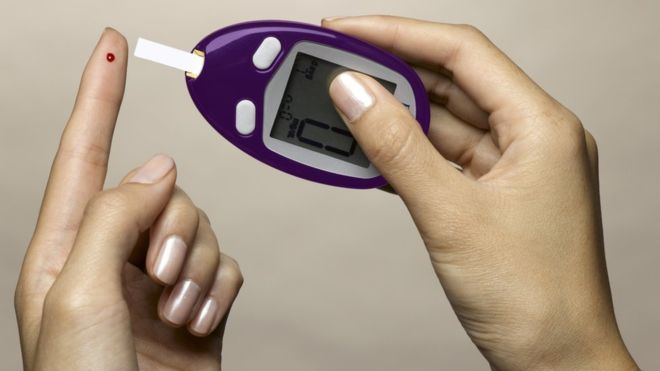 Researchers at the University of Twente, in cooperation with commercial parties, are developing a portable device for detecting type 1 or type 2 diabetes at an early stage. The STW Technology Foundation is funding a research proposal submitted by Sonia García Blanco of UT’s MESA+ institute. The ultimate aim of the project is to develop a prototype of the device.

Some 420 million people worldwide have been diagnosed with diabetes, while a further 180 million individuals have diabetes, however they are as yet unaware of their condition. If we were able to detect diabetes even earlier than is now possible, a great deal of suffering and care expenses could be avoided. UT researchers are therefore endeavouring to develop a cheap and portable device that will use a small drop of blood to detect diabetes at an early stage, enabling any GP to diagnose the condition either in its actual or impending form. Furthermore, the new device will distinguish between type 1 and type 2 diabetes.

At the core of the device is a chip that can detect biomarkers in the blood. Biomarkers are substances that can indicate the presence of a specific disease, physiological process or other biological state. The chip is equipped with an integrated optical sensor. The sensor will initially scan the drop of blood for three different biomarkers. According to project leader Sonia García Blanco, the first challenge is to devise tiny sensors that are sensitive enough to detect biomarkers in a minuscule quantity of blood. The second, but equally daunting challenge, is to design a device that is both portable, robust and easy to use.

García Blanco specializes in developing integrated optical components such as sensors that can be integrated on a chip. She is currently involved in several projects in which she is developing optical sensors to detect specific biomarkers for various diseases. Her work is part of the ‘sensoring and early diagnostics’ research line at the University of Twente’s MESA+ institute. The research project focuses on more than just the technology involved. The University of Twente attaches great importance to ensuring that society as a whole benefits from our research and expertise. The commercial potential of this technology was therefore a key aspect from the project’s very inception. Dr. Kasia Zalewska, from NIKOS (the Dutch Institute for Knowledge-Intensive Entrepreneurship) is involved in the project in various capacities from the outset. For example, she will conduct market research and ensure effective knowledge transfer between the researchers and the commercial parties involved.

Alongside the UT researchers, five Dutch companies are affiliated with the project: BioVolt, PhoeniX B.V., VTEC, Technobis and MEDLON. These five companies represent the entire production chain, from chip design to end-user, and all the steps in between. The STW Technology Foundation has provided a grant of €235,000 for the project as part of its High Tech Systems and Materials programme.

STW has instituted this programme to provide support to researchers who work with commercial parties on technological breakthroughs and innovative applications. The affiliated companies are also contributing more than €100,000 to the project in cash and services.

Depression is dangerous for your heart- Research