Revealed! 40 Parties That Rocked IBADAN In 2021 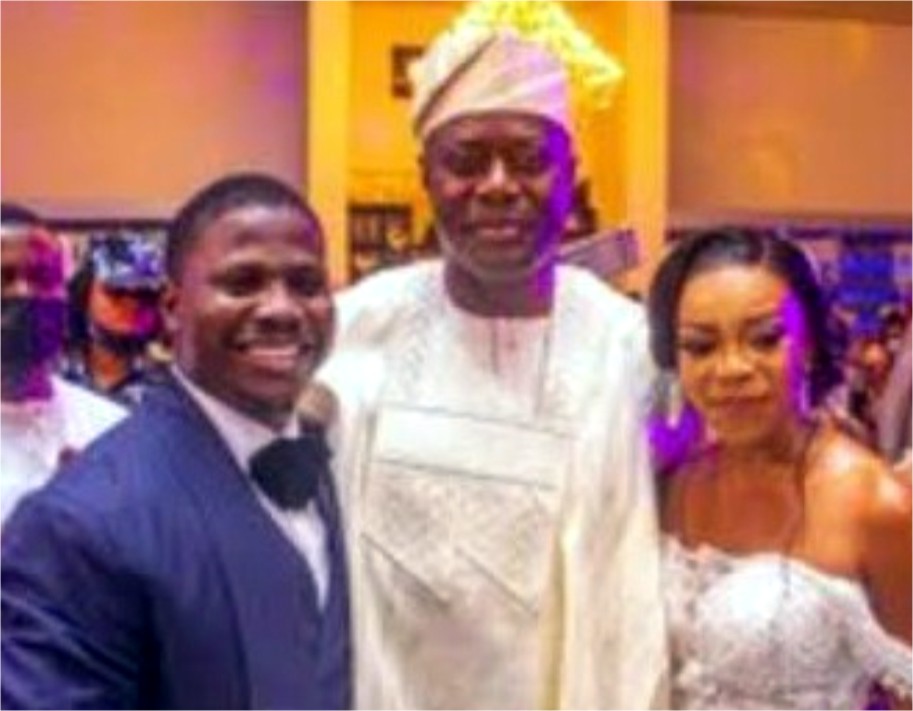 The just-concluded year 2021 was a very busy one in the social calendar of Ibadan, the capital city of Oyo State. The ancient city practically went into a frenzy with the different social functions held in the course of the year. Of course, the reason for this is not farfetched, everywhere was on lockdown for the better part of the year 2020, as a result of the ravaging COVID-19 pandemic. Even the few events held in 2020 were held with COVID-19 protocols being strictly adhered to. The number of persons per gathering was reduced drastically and all. So, when a little relief came in 2021, the postponed and newly fixed events started occurring. The COVID-19 guidelines are still being adhered to though. Because the deadly disease is still very much around, especially with the new Omicron variant.

However, there are some parties held in Ibadan in 2021 that can be categorized as top-notch parties. They are classy and well-attended parties that would be talked about for a very long time.

These are the parties that really shook the Ibadan social establishment to its foundation. Some of these parties had in attendance, the movers and shakers of different sectors of human endeavour, from within and beyond the shores of the country.

As a matter of fact, any celebrity worth his or her salt must have attended one or two of these parties. What made some of these parties tick was not only the quality of personalities that graced them but also the arrangement and planning, which is why they would be talked about for a very long time to come.

To start with, what makes a party hot? A good party must not come short of excellent arrangement (in terms of decoration, sitting arrangement, and services). Quality of food, drinks or what have you also speak volumes. Apart from all these, the security of the invited guests must also be considered.

All these, coupled with good music to compliment the whole arrangement would definitely give a party an ‘A’ mark.

2021 was a good year for party vendors who had been greatly affected by the COVID-19 pandemic lockdown. Musicians also had a good time.

The hot celebrity parties that rocked Ibadan in 2021 include the colourful burial ceremony of Princess Afolabi Christiana Osifeso (nee Adekoya). The party held on Saturday, 30th January 2021. The burial proceedings kicked off on Friday, 29th January 2021, with Christian Wake and Lying-in-State at the deceased residence, at Tipper Garage area of Akala-Expressway, New Garage, Ibadan. A Funeral Service was held the following day Saturday, 30th January, at St. Joseph Catholic Church, Oke-Ado, Ibadan. After which the remains of Mama Christiana Osifeso was laid to rest. While guests were later hosted to a colourful and classy reception at Hall of Grace of Jogor Events Centre, Ibadan.

Sometimes in March 2021, BEEDEL Constructions’ boss, Bukola Odeleye played host to the crème-de-la-crème of the society from within and outside Ibadan. It was the dedication ceremony of his palatial mansion. Virtually all the top socialites, businessmen and politicians in Ibadan and beyond were in attendance at the party.

Everything one could have ever imagined of an ‘A’-list party was available. It was indeed a party to remember for a very long time in the Ibadan social establishment.

Then came the wedding ceremony of Ekefa Olubadan of Ibadanland, Oloye Lekan Alabi’s daughter. For two days, Wednesday, 25th August and Thursday, 26th August, 2021, Ibadan was agog for the party. When Abimbola and Ademola Lawson wed in style. The two ceremonies engagement and the wedding reception, held at Ibadan Civic Centre, Idi-Ape, Agodi, Ibadan. They were well attended despite being on week days. Church wedding was at Anglican Church of the Ascension, Akobo, General Gas Area, Ibadan. After which guests were hosted to an elaborate reception at Ibadan Civic Centre, Idi-Ape, Agodi, Ibadan. On Friday, 6th August, 2021, Abisoye Fagade, the Principal Consultant and Chief Executive Officer of Sodium Brand Solutions Ltd, also buried his mum.

For two days, the Christian Wake and burial proper held on Thursday, 5th and Friday, 6th August, 2021, respectively, Ibadan was on standstill as a result of the massive influx of who-is-who in the society. The party was held at the UI International Conference Centre, Ibadan. That was a party that, for the first time in the history of the country’s social establishment, guests were served with snake and crocodile barbecue, garnished in an irresistible manner.

King Sunday Adegeye popularly known as KSA and Vintage Band thrilled guests at the party. We also had the exclusive wedding of the Oyo State House of Assembly Speaker, Rt. Hon. Adebo Ogundoyin and his lovely wife, Olamidun (Nee Majekodunmi). The wedding ceremony, which started with engagement and traditional wedding on Thursday, 25th November, 2021, at International Conference Centre within the premises of the University of Ibadan, attracted to the ancient city, top celebrities from all walks of life, across Nigeria and beyond. Popular gospel singer, Yinka Ayefele was on bandstand for the traditional wedding. The church wedding was at the All Souls’Anglican Church, Bodija. After which guests were hosted to an elaborate reception at the Polo Club Grounds. Governor ‘Seyi Makinde and his counterparts from Ogun and Ondo States; Governor Dapo Abiodun and Arakunrin Rotimi Akeredolu; Ooni of Ife, Oba Adeyeye Enitan Ogunwusi Ojájá II and Alaafia of Oyo, Oba Lamidi Adeyemi 111 and several other celebs graced the mega wedding. KSA was on bandstand.

Another party that rocked Ibadan in 2021 was Wole Arisekola’s confirmation as Mogaji by the Olubadan of Ibadanland. Monday, 22nd November, 2021. The Publisher of Street Journal Magazine, ‘Bowale Oluwole Arisekola was installed as Mogaji Ajenigi-Eye Compound, Yemetu-Oje, Ibadan. After the palace and other proceedings at his family compound, Wole Arisekola later hosted friends and family at his Bodija residence. While we can not also forget in a hurry, the 80th birthday celebration of the founder of the popular Omotayo Maternity Hospital, Dame Moyofore Kayode. The party took place sometime in November, 2021, at Jogor Events Centre, Ibadan. It had several top celebrities in attendance. Popular Juju maestro, Yinka James aka Adonai was on bandstand.

Otunba Salmon Akaani Oladiti, the National Chairman of Petroleum Tanker Drivers (PTD) unit of NUPENG also shut down Ibadan with his mum’s burial. The party held on November 27th, 2021 at the Obafemi Awolowo Stadium (formerly Liberty Stadium), Ibadan. Several millions of naira were expended on the party, two gigantic Marquees were erected and were well ventilated. Yinka played at the party that had all top players in the Oil and Gas sector in attendance. Also in 2021, the Aare Musulumi of Yorubaland, Edo and Delta, Alhaji Dawud Makanjuola Akinola D-Damak’s daughter also got married. On May 22nd, 2021, the young Honorable Commissioner for Youth and Sports in Oyo State, Seun Fakorede got married to his better half, Chioma. Friday 14th May, 2021, the Aquila Group boss, Shina Peller clocked 45 in style. Shina Peller, the honourable representing Iseyin/Itesiwaju/Kajola/Iwajowa Federal Constituency in the House of Representatives, celebrated the birthday with a colloquium. It was a well- attended event and a colourful one.

On Sunday, 15th August 2021, Ibadan was agog with a big party that literally shut down the entire city. Practically all the socialites in town converged at Jogor Event Centre (Hall of Grace), along Liberty Road, in Ibadan, as Mojisola Funke & Akinkunmi Olalekan held their wedding party. Akinkunmi is Banke’s blood brother. Over 200 London and US ladies stormed Ibadan to honour Akeem and Banke Adetoro. K1 was on bandstand at the party.

On 29th August, 2021, the popular fabrics merchant at Gbagi International Market, Alhaji Shakir Adebayo celebrated his 40th birthday in style. The best of the best were put together for the party. Trust Shakiru Adebayo, though he is a bit reserved but he has high taste for quality things. He is rich and also has the wherewithal to throw a mega party at 40 but he chose a low key one.

Dare Another Level, popularly known as Fujicologist and another prominent band entertained guests at the party held at the celebrant’s mansion. Dele Omo Woli , M.C Remote and others were there too. Klala Photography, Honey Cakes Creationz (Cakes and Desserts), Jimone Kitchen, Honey Bakers (Chops and Finger Foods) and Jadescuisine were some of the party vendors engaged for the party.

The 7th edition of the Babatunde Oduyoye Annual Birthday Lecture Series was another event that brought the who-is-who to Ibadan in 2021. Oduyoye is the Special Adviser to Governor ‘Seyi Makinde On Political Matters.Topic of the lecture, held at Oritsejolomi Thomas Hall, International Conference Centre, Ibadan, was, “Security and National Unity In Difficult Times”. Some of the dignitaries at the lecture included the former Senate President, Senator Adolphus Wabara who was the co-Chairman of the event and also stood in for the Chairman of the Occasion, Sokoto State governor, Rt. Hon. Aminu Waziri Tanbuwa; Chairman, Nigeria Governors’ Forum, Dr. Kayode Fayemi of Ekiti State who was a guest Speaker at the lecture.

The Ibadan social establishment also witnessed the mega burial of popular society woman, Alhaja Ganiyat Inukan’s mother, Alhaja Sidikat Inukan. The party took place at the Recreation Club Arcade, Ibadan. A gigantic canopy was erected for the VIP, while there were other smaller tents for general guests. It was a party to remember. Popular Fuji icon, Abass Akande Obesere PK1st was on bandstand. The Olubadan of Ibadanland, Oba Saliu Adetunji Aje Ogungunuso 1, was represented by his wife, Alhaja Rasheedat Ololade Adetunji. The duo of Alhaji Gboyega Lawal and Taiwo Obama anchored the event.

Sunday, 28th November 2021, Mrs. Folorunsho Fagbemi, a prominent Aso-Oke dealer also buried her father, Alhaji AbdulAzeez Adisa Alarape. The party held at ICC in U.I and had the sensational Fuji act, Ramoni Akanni on bandstand. The wife of the Osun State governor, Mrs. Oyetola, as well as other dignitaries graced the party.

Other parties held in 2021 and won’t be forgotten in a hurry are: Oyo FIBAN Week that was held at Mauve 21 Events Centre; OGR Traditional Dress Riot at Manhattan Hall, Eleyele Road, Ibadan; GCI Old Boys Association 2021 Reunion; the Oyo State Council of Nigeria Union of Journalists, NUJ Week and the official opening of the new Bodija office/end-of-the-year party of the House of Dexterity. The Dexterity Plus boss, Favour Essang really proved his worth with the event, as an event decorator of distinction. It was a colourful atmosphere, as guests enjoyed every bit of the party till very late in the night. Both DJ Secxy and DJ Gavpop were on the wheels of steel. While Woli Agba, Dele Omo Woli and several acts thrilled guests with their electrifying performances.

READ ALSO: 5 DESTRUCTIVE TOPICS YOU MUST NOT BRING UP…

5 Destructive Topics You Must Not Bring Up…