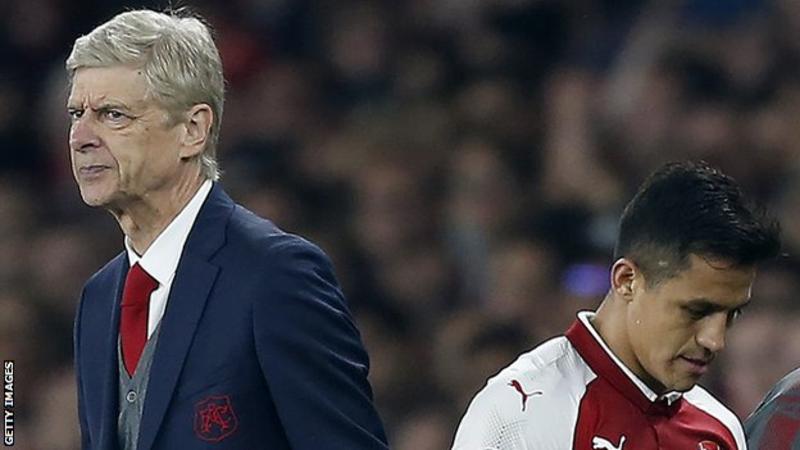 Arsenal manager Arsene Wenger says the club have “nothing to hide” after former player Alexis Sanchez reportedly missed a drugs test on Monday.

The Chilean, 29, allegedly missed the test on the same day his transfer to Manchester United was completed.

“I think it is a special event for him to miss a drugs test because he was somewhere else,” said Wenger.

The Frenchman added the club had not been contacted by the Football Association or UK Anti-Doping.

Sanchez joined the Gunners from Barcelona in 2014, but left for Old Trafford in a swap deal which saw Armenian midfielder Henrikh Mkhitaryan move the other way earlier this week.
After initial reports in Spain, several British newspapers reported on Thursday that Sanchez had been caught out by the FA’s “whereabouts” rule regarding drugs tests.

Sanchez and Mkhitaryan were both pictured at the immigration office in Liverpool to secure work permits before their moves.

Ex-Barcelona player Sanchez has been included in United’s squad for their FA Cup fourth round tie at Yeovil on Friday, which is live on the BBC.

Wenger said: “On Monday there was a lot going on, it is a special day for Alexis Sanchez – you have to do paperwork and travel. Was he still our player on Monday or not? You don’t know.

“It is just a bad day for him to be tested. Honestly, on the administration side it would still be our responsibility because he had not moved. I don’t know what really happened.

“I am quite relaxed because we have nothing to hide here, we always try our best to cooperate with doping control.

“The intention of Alexis was not to hide and we have nothing to hide.”