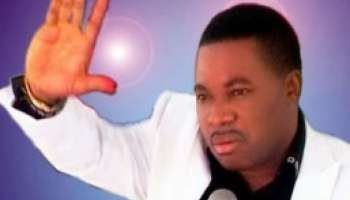 Prophet (Dr.) Olagoroye Faleyimu is a renowned man of God, who has, over the years, been predicting what will happen in a given year and his predictions have been accurate, manifesting. He is the founder of Mountain of Blessing and Miracle Church of Christ. One of his past predictions was the sudden death of THE late Micheal Jackson. Another was President Buhari’s victory over the PDP in the 2015 elections. The respected man of God spoke with City People’s GBOLAHAN ADETAYO and revealed his 2018 predictions. He predicted that President Buhari would win in 29 states in 2019 presidential election. Thus, winning a second term, among other shocking information you need to know about Nigeria. Excerpts:

What did God reveal to you about Nigerian politicians?

God revealed to me the 2018 governorship elections that will hold in Ekiti and Osun States. PDP would win Ekiti State, while Osun State would go for the APC. Concerning Buhari’s government, I have said it more than 20 years ago that he would rule Nigeria for 8 years. In the 2019 presidential election, Buhari would win in more than 29 states and he would be declared president. He would win in most states in the northern part of the country. Also in the West, Imo, Anambra, Edo, and Rivers States. He would rule Nigeria for a second term.

In Lagos State, Ambode would win in more than 16 local governments and he would be reelected the governor for a second term. In Ogun State, the Yewa/Awori people need serious prayers to enable them pick a strong candidate, but APC would continue to rule the state. Likewise, Oyo State, APC would continue ruling. I have once said it that Jonathan would be the last president that the PDP would ever produce, the party is dead forever. They can rule in states as governors, but they cannot win the presidency again. Atiku, Saraki and others would not rule Nigeria.

Fayose should pray seriously against sudden death because there are challenges ahead of him to face. His wife should also pray not to weep, so that all that make them happy would not suddenly turn to sorrow. Buhari, in 2019, would win in the local councils of other presidential candidates because God said he Would spend 8 years on the seat. There won’t be miracle or blessing in 2018, people should delve into agriculture because that is the only way out to survive this year. The will of God is what Buhari is doing because God said it in 1992 and we are repeating it in our predictions.

I said it then that Obasanjo would be jailed and after he would become president, but he isn’t our Messiah. The likes of Buhari, Obasanjo, Abacha and IBB were not sent to change the situation of the country, but they became Presidents and head of states because God wanted to use them to do some certain things and also to enable them to enjoy themselves as military persons.

Our Messiah is a man of God from Ondo State. God revealed that before he would agree to contest, Nigerians would cry to him and beg him. Don’t expect any miracle from Buhari, he is only ruling the nation according to the Will of God. Nigerians would organise demonstrations to forestall Buhari’s victory for a second term, but he would come out in flying colours. He would not die during his tenure, but he should be prayerful not to lose his wife.

Just like when people were speculating that he had died, nothing will happen to Buhari until he completed his 8 years, but don’t expect any miracle from him. The Messiah would come in 2023 and it would take him 2 years before Nigeria would get better. God is warning OBJ not to criticize APC’s administration and if he continues, he could be jailed for the second time. God is saying because he also didn’t perform any miracle while he was a President, he should keep shut. He was sent to do some certain things, not to change Nigeria for better. Tinubu should ask for forgiveness because his time is near. He should pray, so that he could witness the swearing in of Buhari in 2019. Nigeria will not break and the Igbos will rule Nigeria in 2023.

The Yorubas would provide the president 2023. The vice president will come from the Middle Belt and the Senate President would come from the Igbo, while the Speaker of the House of Representatives would come from the North. That is how God has arranged it. God will open doors for pastors to venture into politics in 2022. God wants to use his servants for this country starting from 2022.

Many of them would be installed kings. Both Christian and Muslim clergy would get better through the help of his chosen servants not the fake ones. Nigeria would be great through the messiah and the white would be forced to relocate to Nigeria with fresh ideas and businesses. Nigeria will be the richest country in the world. But to achieve this, we need to pass through some hardships and overcome them. That is exactly what is happening in Nigeria at the moment.

In 1992, God sent me to declare that black powers are the problems of this country. So many things would be happening, but no breaking up in Nigeria. World Black Power is what influenced Boko Haram, Baddo, Cultism, Fulani Herdsmen and other menacing forces we are witnessing in Nigeria.

Those powers are using the crises and killings to suck blood. God made me to know in 1992 that Babangida would leave power, but would continue using blind, incompetent people as the presidents because the country is in darkness. Most pastors and all other Nigerians, we are all blind. That is why there won’t be any solution until the Messiah comes in 2023. His inner eyes would be opened to liberate us form the kingdom of darkness. The only problem Nigeria has is this world black power.

Can you give us what God showed you about Nigerian society?
Nigerians should seriously be praying not to witness one out of the 7 plane crashes that would happen around the world. After that, the Ooni of Ife needs serious prayers to have a long life. He would marry a new wife this year. When he was installed the Oba of Ile Ife, God sent me to him to engage in a special prayer so that he could spend 25 years on throne which he failed to do. He should be prayerful to, at least, live long.

God said that Ooni believes in Idols more than Him. God said he would still put him in one tribulation that would make him finally know that He is God. God said Pastor Tunde Bakare should quit politics because he has no future in it. He should go and read the 2Samuel verse7 to have better understanding of what God is saying.

If he contests a Local Government Chairmanship election, God said he would not win. God is further saying that he would quickly die if he continues as a politician. Before the late MKO Abiola was made the Aare Onakankanfo, God told me to read 1Judge 1 to 7, which I did, God also told me to read 1King 22 verse 1 to 39 because of Gani Adams, he should also pray for forgiveness because his hands are not clean and vengeance should be taken on his wife and kids.

What do you have to say about the entertainment industry?

The Nollywood industry should be prayerful, so that they won’t lose 5 stars among them this year. Saheed Osupa, Pasuma and Obesere should also engage in serious prayers against hardship this year. God is showing me that hard time will force them to be selling their properties. A lot of actors will also face hardship especially the women among them. Rich men would deceive them to leave their marriage and at the end, they will go back to square 1.

Is there any way this can be averted?
Why this will happen is because some of them don’t believe in God, they belong to many secret societies. Those who are for God among them would not witness the hard time. The identities of the 5 Nollywood stars who would die this year weren’t revealed to me. I always mention names if God has shown me. Many traditional rulers especially the old ones would kick the bucket. Primate Olabayo should pray so as to see the end of this year. Primate Ayodele should also pray against stroke in 2019.

How about Nigerian sports?
They need to pray hard and not to be over confident, if they can do these, they would definitely win the World Cup. Without these, they won’t win anything because this country has been declared world Black Country. Most Nigerians don’t believe in God. God is aware of the hard time we are facing in this country and there is no solution for now. He wants us to know that He truly exists. Pastors and the rich ones have been turned their backs to God in Nigeria and He is angry over that. God says he would be taking them one after the other.

They won’t witness the Messiah. God warned me not join some people to pray for this country, so that I would not be rendered useless because there is no way until the Messiah comes in 2023. I have been saying this for years and people say we are prophets of doom, but they are not seeing blessing. Now, the whole Nigeria is seeing it that the blessings some fake prophets predicted are yet to be seen. The ruling Government knows that they are not giving blessing, but hard time. Nigeria’s case looks like that of the Israelites when God said they would slave for 400 years before things will get better. Exactly that is what is happening in Nigeria. Once the period of trial is complete, we will start seeing changes.

FIRST BANK BEGINS THE YEAR WITH A...