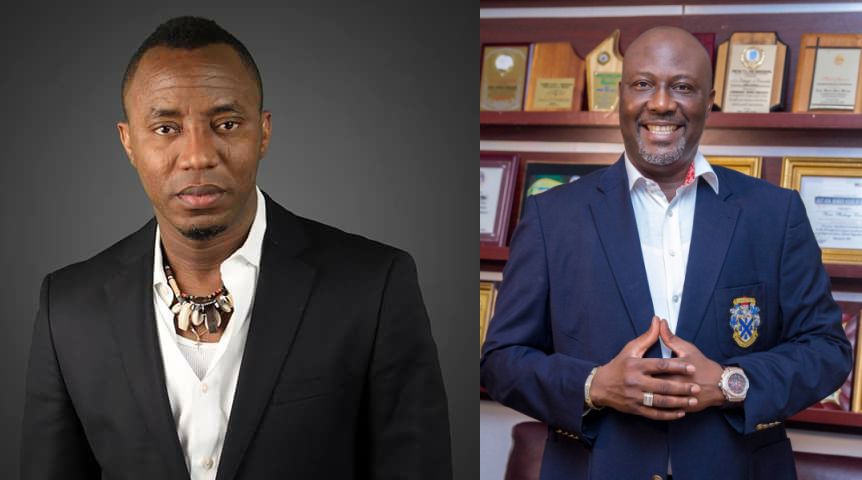 Omoyele Sowore has launched another attack at Nigerian senator, Dino Melaye by calling his newly released N50,000 a copy book on anti-corruption nothing but cut and paste of newspaper articles.

Publisher of Sahara Reporters, Omoyele Sowore has revealed that Dino Melaye’s N50,000 per copy book is ‘cut and paste’ of newspaper article.
He made the revelation at the launch of Sahara Reporters’ civic media lab in Lagos on Thursday, Sowore said this launch is unlike the red ribbon tape being paraded in Abuja, making specific reference to Melaye, senator representing Kogi west at the national assembly, according to a report by The Cable.
While attacking Dino, he said: “What prof briefly mentioned about the launching in Abuja was the book launch of Dino Melaye, that has been very gut-wrenching for a lot of us.
“We have been looking for that book in bookstores in Abuja, it has not been made available because we can’t afford it. It is N50,000 — just to buy cut and paste of newspaper articles.”
Speaking later on at the launch, Sowore said he started Sahara Reporters by accident, emphasizing that he did not start the platform the day he started using the internet.
“When I got to the US, we were using dial-up on AOL; you will dial into a telephone number and if you are lucky, you will hook onto the internet after several attempts.
“I had no idea that you can get to a point where you can actually put a device in your pocket and use it to reach the whole of the world; communicate and also receive communication.
“The way my head always works was that I was that I will think about Nigeria, even though I was in the US, I was living Nigeria. Even though I was living in the US, I will wake up Nigerian time, I was upset the Nigerian way, I was unhappy the Nigerian way, I was also happy sometimes, the Nigerian way.
“As most people know, I was also an agitator the Nigerian way.I was inspired also by the decadence coming from the Nigerian media. I wanted to read Nigerian news all the time, and I discovered that Nigerian newspapers that I used to love were just not reporting issues as they were happening.
“Of course the reason was that the money bags, the politicians, had bought over the newspaper. As you know there was a time James Ibori owned and he still does own a newspaper today.
“One of the most popular newspapers in Lagos is owned by a politician known as Jagaban. You know what that means. The most powerful TV station in Lagos is also owned by him. So they have hijacked the media space.
“So I was seeing media, but I was not seeing mass in it. It was the reason why I kept pushing like the man of the legend that became the man who invented tyre. He was boiling rubber, he slept, overslept and when he woke up, rubber had become tyre.
“That was what I was doing. I was just trying my luck, I wanted to be reaching maybe 200 people in a day, and then one day I started and we were reaching 5,000 and then the next month, on and on. To the extent that by the 2015 election, we reached four million people in one day.”
He said these also became frustration for him because the young people who he thought would have taken the opportunity of the ideas online to a liberating level have become paralysed by them.
“Forget about the noise on twitter, it has no depth; it is very shallow. I don’t think Twitter can take us to promise land,” Sowore said.
“I don’t see it happening, because I see the people they call social media influencers in this country, they are not the kind of people who are thinking progressively about how a nation should be built.”
Senator Melaye’s N50k Book is ‘Cut & Paste’ of Newspaper Articles – Sowore was last modified: May 26th, 2017 by Arinze Ago

Is Saturday the first day of Ramadan in Saudi Arabia?