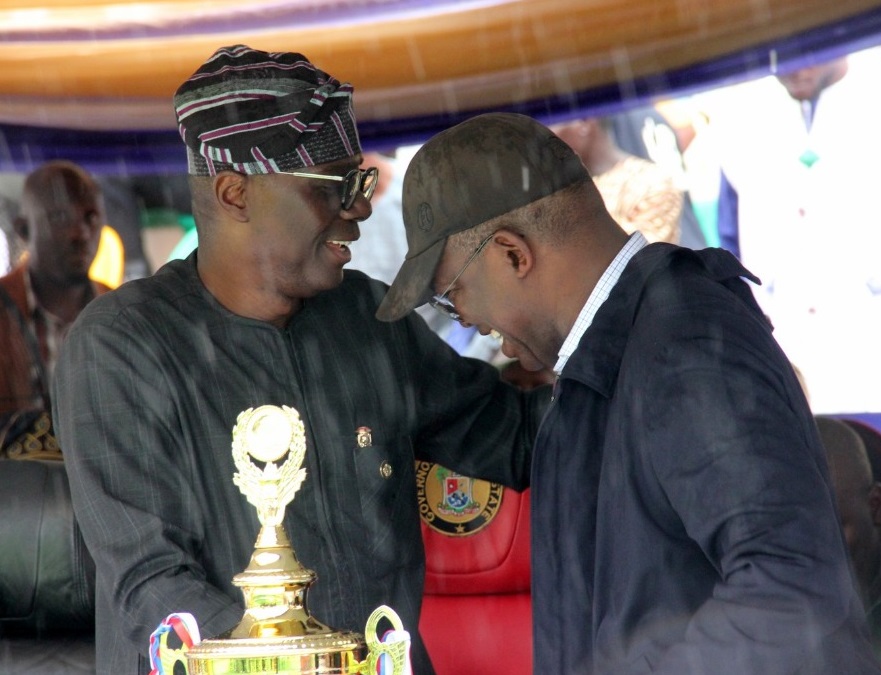 The Epe community of Lagos came alive on Thursday, June 30, 2022 when Senator Tokunbo Abiru commissioned the Oluwo Fish Market and the world class mini stadium as facilitated through the Office of Sustainable Development Goals(SDGs)

Abiru,in his statement recalled how he came into the senatorial assignment with a determination and passion to improve the lots of Lagos East and elevate its socio-economic conditions, and to compliment the efforts of Sanwo-Olu.

He said he conducted a need assessment after his inauguration to ascertain the real, peculiar and most pressing needs of the 98 wards in the 16 Local Government Areas and Local Council Development Areas in the Lagos East.

Abiru said the feedback generated have been the compass in navigating where and what to facilitate in respective communities in the order of priority and expediency.

He added: “So, in the last 18 months that I have held the people’s mandate, I have prioritized my focus and responsibilities on three  pillars; Legislative role; Empowerment, and endowment.

In the area of legislation, the senator said in the last 18 months in the Senate,he has  sponsored  13 private member bills and co-sponsored three three others, adding that ” all the bills have scaled first reading.”

I have also moved two motions. The first is motion on the ban of cryptocurrency in Nigeria and motion on the urgent need for the rehabilitation of the Ikorodu-Shagamu and Ikorodu-Itoikin-Epe roads to further bridge the infrastructural gap and enhance economic growth in the corridor of our district.

Please, let me speak briefly on the Ikorodu/Sagamu Road. The efforts I made through legislative interventions led to the virement of the funding of the road to Sukuk Financing Scheme. I am glad to inform you that the efforts have yielded desired results.

Equally, I have made efforts for the improvement of Ikorodu-Itoikin-Epe road which connects our town with the rest of Lagos. The road which was constructed in 1975 by the General Yakubu Gowon regime is indeed due for major rehabilitation. I wish to assure that our efforts are receiving necessary attention by the Federal Government for the rehabilitation of the road.

In February 2022, I presented a petition from the Magodo Residents Association on the illegal invasion and occupation of Magodo Estate by armed policemen purportedly acting on the order of the Attorney General of the Federation and Inspector-General of Police.

“In the same manner, I have set up a Community Innovation Space known as Senator Abiru Innovation Lab (SAIL) in partnership with a renowned technology and Social Enterprise company, The Co-creation Hub (Cc-HUB) in Lagos to train youths in the senatorial district on relevant digital and innovation skills, and build the best entrepreneurs that can compete in the ever-dynamic global economy.

The Center is currently situated in Ikorodu within our district, starting from the constituency office but planning to move into a bigger permanent facility by July 2022. Five (5) pilot programmes have been put together with a view to proffer solutions to some of the challenges identified and many of our youths have started applying for opportunities to participate in the programmes.

“Over 2,300 young people across the Lagos East Senatorial District applied for the SAIL programmes. Currently, over One Hundred Fifty (150) students are participating in the Five (5) Pilot Programmes at the SAIL Centre in Ikorodu while over One Thousand (1000) eligible applicants were trained online.

“I must publicly acknowledge and appreciate the magnanimity of the Presidency, through the Office of the Sustainable Development Goals (SDGs) for the projects we are commissioning today, those we had commissioned in the past and the ones that are yet to be commissioned. I specially thank His Excellency, President Muhammadu Buhari, GCFR, and Her Excellency, Mrs Adejoke Orelope-Adefulire, the Senior Special Assistant to President Muhammadu Buhari on SDGs.

The projects attracted to Epe town that are being commissioned today are: a 960-capacity mini-Stadium , which include; Football pitch, Basketball and Volleyball courts, administrative offices, changing rooms and other amenities; and the remodelling of the popular Oluwo Fish market which now comprises 240 open stalls, 82 lock up stalls, 5 open floors, 12 toilets and 4 new offices for Iya Oloja and Baba Oloja, Tourism Board and Local Government Staff Security post.

We are also empowering about 1,250 market women and traders with the sum of N50,000 each as financial grants totalling N62.5 million. Our respective Iya Olojas in the 16 LGs/LCDAs were given the direct responsibilities of selecting 50 members each in their localities totaling 800 market women, while the remaining beneficiaries were nominated by the party structure.

The empowerment also includes the distribution of Hand-planters to about 200 farmers, along with financial grants of N20,000 for our farmers in the agrarian part of the district.

Lagos State Governor Babajide Sanwo-Olu, who commissioned the projects, heaps high commendation on Senator Tokubo Abiru, Chairman of Senate Committee on Industries, for achieving great feats for his district, barely one year in the Upper Chamber of the National Assembly.

He said he was not surprised by the senator’s dedication and commitment to public welfare, having known him in the past 35 years as a goal getter, a shrewd banker, successful technocrat,  former Finance Commissioner and a man of the community.

Sanwo-Olu also lauded Abiru’s commitment to progressive ideals and principles, reminiscent of the disposition of his illustrious father, the late Senator Akanbi Abiru, an eminent jurist and Awoist.

The governor hailed Abiru for sponsoring the people-oriented empowerment programmes, saying that he is living to the vision of the All Progressives Congress (APC) in a bid to uplift the lives of Epe and Lagos East people.

Sanwo-Olu said:”This is what democracy is all about,” urging the Senator and other representatives not to relent in their efforts at serving Lagosians with diligence.

The governor said the recreational facilities will enhance the health and wellbeing of Epe residents and lay the foundation which can be built upon in the future.

Sanwo-Olu urged beneficiaries to use the facilities judiciously. He also advised beneficiaries of the grants to be productive and justify the extention of the duty of care.

The governor implore the maintenance culture that will protect the facilities and make it a worthy monument.