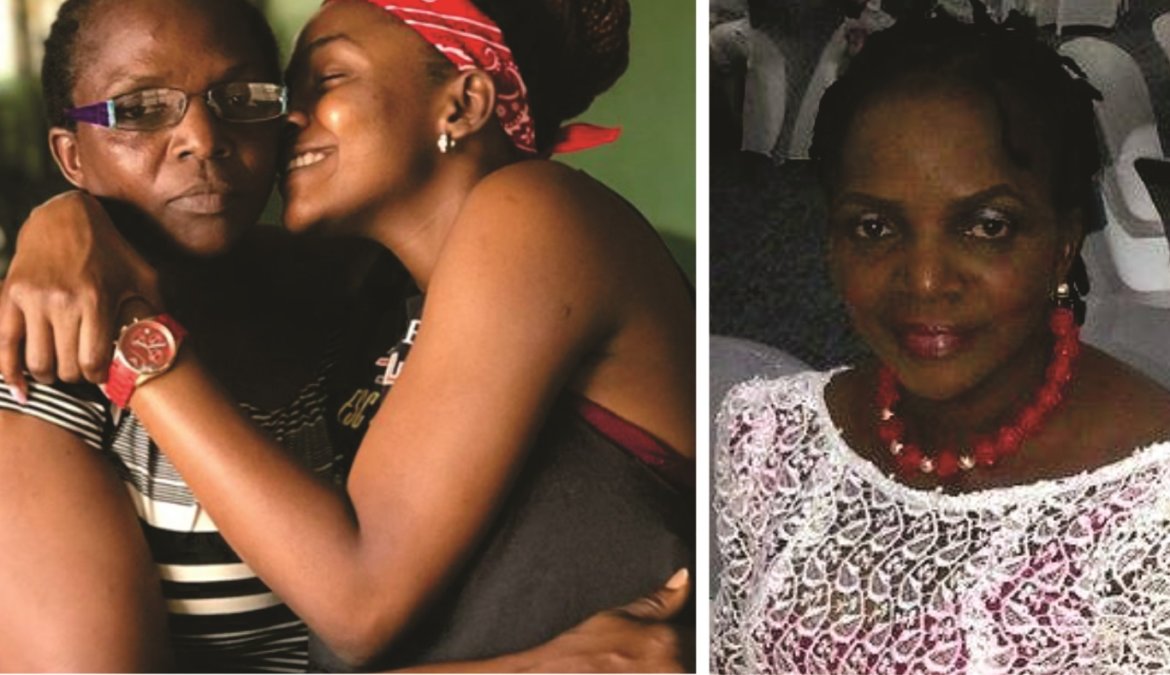 Not so many know that popular singer, Simisola Bolatito Ogunleye known by the stage name “Simi” used to be a gospel musician. Simi grew up dancing and singing as a member of her local church’s choir until she wrote her first song at the age of 10. Her professional musical career started in 2008 following the release of her debut album titled Ogaju which contained songs like “Iya Temi” and “Ara Ile” with the entire musical production from Samklef.

We are sure you also do not know that her mother is the head of the Ushering Unit at Pastor Sam Adeyemi’s church, Daystar Christian Centre. Simi’s mom, Ms. Jedidiah Ogunleye and her estranged husband got separated in 1997 and she’s been single ever since. According to Simi’s mom who shared the testimony of her engagement at church on the eve of the New Year, she said:

“I joined this church for over 20 years as a sinner. I will like to say a big thank you to Pastor Sam. My desire has always been to get married. Every Sunday, I’m always ushering couples to their seat and I love to see these couples ushered into the church because marriage is something I so much desire. Getting married has always been a particular goal I rewrite every year. My daughter Simi once told me that “mummy, this church you are going, it’s just young boys and youths that attend this church, you may never find a man of your age in that church.” But I trusted God too much.

Just this year a man walked into my life and as you can see, I am now engaged and would be getting married in January 2018. Just before the singer’s mom began sharing her testimony, the congregation was already screaming. It got to the extent that Simi’s mom had to keep the congregation quiet in order to be heard. She was full of great excitement as she showed off her ring to the whole church.We are so happy for her.

If you are a member of Daystar, you will know Simi’s mom as that very nice usher who will always go out of her way to make you comfortable in church. Simi’s love for her mother is overwhelming as the singer can’t seem to hide it every time she’s on social media. Simi had consistently uploaded videos of her and her mother dancing on her Instagram. Although very little is known of her father, but Simi, in an interview revealed how much she misses her father. She was quoted to have said; “I grew up more with my mother because my parents separated when I was nine. My dad passed on last year in March, and if I could turn back the hands of time I’ll be more involved with him than I was. These days, I wish I was more around for him during his last days, but who would have thought? “He spoilt us silly as kids. I was in school when he first got ill and he would try to come see me, even though there was a lot of family drama in between, stuff I really can’t talk about. But it’s all good.

I wasn’t always around; I wasn’t always there with him. He is gone now and even though I still have very fond memories of him, I wish I did more. I felt very bad for some time but I guess we all learn from situations of this sort. “I guess that’s a lesson for everyone, because if you really love someone you’ve got to make out time for them however busy you are. In another interview, the award-winning singer said her mother loved them unconditionally and got them the best things in life.

She said: “She was so strong, she never makes excuses like I don’t have this or that. She would do whatever to make sure we were okay. We weren’t hungry, we went to really good schools, so she went to the end of the world for us. My mum doesn’t know how to do tough love. When she loves, she loves completely, she loves like she can see you are the bad egg and yet she would love you like you are the best egg.” Describing herself as a child, Simi noted that she was never a quiet person and was very stubborn. She said: “I was stubborn as a child and I have never been quiet. However, I wasn’t stubborn because I wanted to, I was about pushing my ideas. If I had an idea in my head, I would like to follow through regardless of what everybody says or anything.”

In her last interview with City People, Simi revealed how her mother got involved in her music career and also supported her, she was quoted as to have said: “She always knew I was going to do music, I don’t think she knew how serious I was about it, so when I graduated, especially when I finished serving in Abia State, and she saw that I was so into the music, she never tried to force me or intimidate me into doing something else, she advices me and tells me what she thinks but she never makes me feel uncomfortable or tell me don’t do this. When I told her music is what I want to do, she supported me as much as she could.

Well, there you have it. Simi’s mom is engaged and the wedding is this month. As soon as a date is revealed, we would be the first to break it to you, so get your dancing shoes ready as we rock to Simi’s “Owanbe” at her mother’s wedding reception. Keep your fingers crossed; City People is sure going to be there.

Singer, SIMI’s Mum Reveals Her Marriage Plans @ 60 After 20 Years Separation From Her Ex-Husband was last modified: January 19th, 2018 by Reporter