Home Sports Why I Had Issues With My Chinese Club – Super Eagles Attacker, BROWN IDEYE
Sports 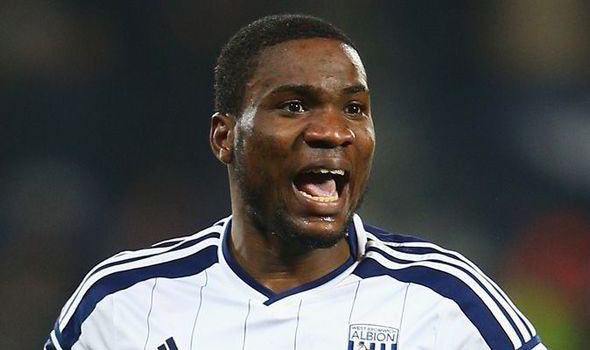 Super Eagles attacker, Brown Ideye, is one of the few Nigerian Players, who moved to the Chinese league for mega bucks. However, a cordial relationship with the management of Tianjin Teda, the club that Ideye laced boots for at inception turned sour when members of his immediate family were denied entry into China because of the club’s refusal to help.

The denial affected his performance, on the field and Brown was benched and replaced with another player.  In a bid to keep fit, he sought a season on loan deal out of China.

City People’s Reporter, FEMI FABUNMI, brings you Brown Ideye’s interview where he bares all that happened to him. Read on

You were part of the trophy-winning Super Eagles team in 2013, how do you feel about it even now?

Winning the Nations Cup meant a lot to me even now. I know how much I put into that team.Stephen Keshi came to me in my room and said that he knew I was a point striker, but he had plans to play me from the flanks. It was my first time of playing from the flank and I gave it a shot with the advice of my wife. Truth is I had never played from flank since my days in France and Greece. It was a big challenge, but I tried it and it worked.

Did you enjoy your partnership with Emmanuel Emenike?

Sure, I did. We even became best of friends afterward, the partnership strengthened our relationship. It became more cordial and we solidified it more on the pitch.

At a point, you were dropped out of the national team, how did you receive the news?

The late Stephen Keshi didn’t tell me himself, it was his assistant, Valerie, who told me. He said I should speak with my agent to call Keshi, so that I wouldn’t be left out. Prior to the World Cup, I had a premonition I would be left out. Sincerely, I cried that very night. I almost tweeted that I was done with the national team that I have been used and dumped, but a spirit in me prevented me from saying that. I just accepted my fate and moved on. That was exactly how that one played out.

When the final list was released, how did you feel?

I felt really bad, I had thought I was going to make the list, considering my contributions at the Nations Cup, but the coach had other reasons why he left me out. He claimed I wasn’t scoring goals the way I should.

You have issues with your Chinese Club, Tianjin Teda, fill us in on the development?

I had Issues with my coach because he refused to pass my message to the management. I signed a contract with the club, so I moved from my base in Greece to China, but somehow, the management of the club refused to help facilitate relocation of my wife and children to China. They were denied entry into the country and that was affecting my performance on the pitch. I have always moved to anywhere I go to play with my family. My grouse with the club was that my wife and children’s absence was affecting me and I told them that if they couldn’t make provisions for them, I would leave. My coach misunderstood my points and reported me to the management   and they chose to put me on the bench. They brought in another player, Frank Archibong, from Ghana to play my position.

How would you describe the Chinese players, are they very good?

They are just average, if they were very good, clubs in the country wouldn’t have been paying so much to bring in foreigners to play their matches.

Tell us your plans now?

My plan is to try and get another club probably in Europe even if it means going on loan. I will do that. I need to keep fit and play regularly I don’t want to miss the World Cup for anything.

How was Life at Tianjin Teda?

At first, it was very difficult for me because the authorities of the club wanted me to hit the ground running. Anytime they remember the price tag on me, they wanted every ball I touched to hit the net. I was also played basically out of position. That explained why I struggled to score four goals in ten games. Sometimes, I was drafted to central defensive  role, sometimes the midfield.  All these and many more challenges contributed to my low performance at Tianjin Teda.

Why I Had Issues With My Chinese Club – Super Eagles Attacker, BROWN IDEYE was last modified: January 19th, 2018 by Reporter