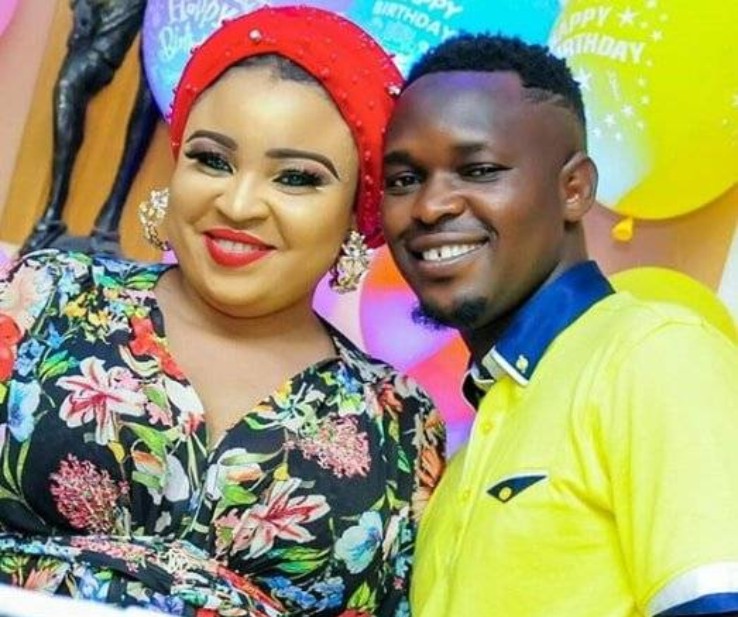 +Details Of Their Wedding This Week

Popular Yoruba Movie Director, Okiki Afolayan is in love with pretty actress, Bimbo Ogunnowo. And both of them are altar bound this week. They have been dating each other for years and both have become like brother and sister. So into themselves are the 2 lovebirds that practically everyone in the industry know their story. And we can tell you that the wedding promises to be big.

If there is one wedding that is set to rock the Yoruba movie industry, it is definitely that of top, Okiki Afolayan and Bimbo Ogunnowo. Both have been in a sizzling romance for a few years now.

Okiki Lawrence Afolayan (who is not related to the Adelove family) is a film producer, script writer and a multi-award winning director. He was born and raised in Muslim part of Lagos State. This Omu Aran in Kwara State movie director started his career as a Continuity Manager in 1999, under the tutorship of Mr. Olumide Adedayo, after which he delved into movie directing. He gained a lot of recommendations and recognition through the first film produced by him titled Mr. Kola. In 2010, he went into directing fully. He has directed more than 150 films and he is widely regarded as one of the most important and influential of this generation. He is one of the busiest directors in Nollywood presently.

Bimbo Ogunnowo, on the other hand, is one of the Yoruba actresses rocking the industry. According to her, Femi Branch was instrumental in her adventure into acting. She produced her first movie in 2009 and instantly became a household name, she has featured in movies such as Eldorado, Ifejafunmi, Ajoge, Ifeofoju, and lots of others.

This very industrious actress is also the CEO of Extreme Beauty Place, which houses a boutique, cosmetics and makeover, with high standard facilities. So she is indeed blessed with beauty and brains.

Bimbo has lately been the first choice to feature in most of the films directed by the talented actor. It was also gathered that the actress have moved into the director’s abode at Arepo area of Ogun State, living together as a couple of days after their engagement. She also took to her Instagram page to announce her engagement. “Guess who is off the market congratulation B, you deserve it” #if you know you know#, #dontmindmyvoice#.

She also posted the below statement “I am about to marry my best friend. So these days, I prefer my natural look than a makeover (he doesn’t mind any). It must be his effects on me lot. Thanks for the wonderful congratulatory messages, I got from you all, calls and messages. Ese modupe. I am happy I got friends like you all. May we always be happy. #taken ## mary my best friend#, #out of market#.

However, another post from the actress reads this “who am I that you have given another chance to love? Over to you Almighty God. Set to marry my best friend of 11 years. God you are exalted. Marrying my best friend and gist partners!!! #Oba 2018# Taken ## hooked # # another chance# #blessed#.

Oba 2018 simply means Okiki Bimbo Afolayan 2018. The wedding proper is set to take place on the 6th of October at Timesquare, Ikeja, Lagos, which will involve the Nikai Engagement and Reception. While the couple will going to the registry on the 5th, before the Nikai ceremony popular musician Boye Best best will be at the band stand to thrill and entertain the guests. Lots of Aso-Ebi will be in display at this highly anticipated wedding, because the bride and groom maintain a very cordial relationship with both their senior, junior, and contemporaries in the industry.

So star actress like Fathia Balogun, who falls into the category of her senior colleague in the industry, will be on a special aso-ebi, there will also be special aso-ebi, for the friends of the bride, then her contemporaries as well, same applies to the groom as well, so in total, there will nothing less than 5 different display of aso-ebi at this grand wedding. While the general guests are expected to dazzle in white and pink attire.

Bimbo Ogunnowo is no doubt associated with class, and this is will definitely be evident in her wedding, as most of her close friends are already doing lots of running around to see that no stone is left unturned for the grand wedding. Yoruba stars based abroad are also expected to grace the wedding.

Top Movie Director, OKIKI AFOLAYAN Set To Wed – The Story Of His Romance With BIMBO OGUNNOWO was last modified: October 1st, 2018 by Reporter