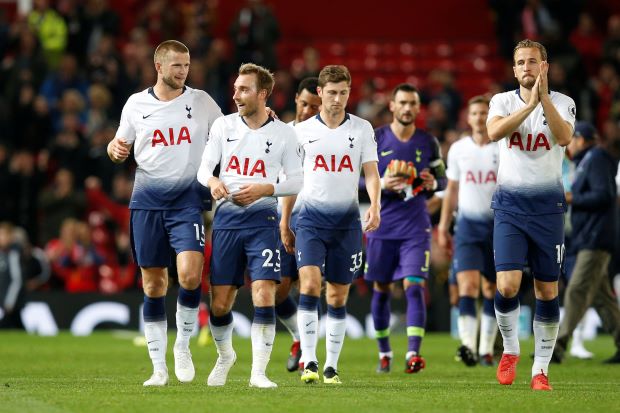 Tottenham maintained their 100% start to the Premier League season and increased the pressure on beleaguered Manchester United manager Jose Mourinho with an emphatic victory at Old Trafford.

Mourinho was hoping United would bounce back from an abysmal display in defeat at Brighton, but Spurs ran out easy winners once Harry Kane and Lucas Moura struck twice in the space of two minutes early in the second half.

United were left to rue Romelu Lukaku’s missed chance when he rounded Spurs keeper Hugo Lloris from Danny Rose’s backpass, but they ended well beaten to make this their worst start to a league season since 1992-93.

Spurs were simply too good for United after the break and the contest was effectively over once Kane directed in a superb header for his first goal at Old Trafford after 50 minutes and Moura swiftly swept home Christian Eriksen’s perfect pass for the second.

The outstanding Moura raced clear to add the third six minutes from time to make it nine points from nine for Spurs.

Mourinho was a dejected figure amid a sea of empty red seats at the final whistle, having lost two of his opening three Premier League games for the first time in his career.

Counterpart Mauricio Pochettino, in contrast, was able celebrate his first victory as Spurs manager at Old Trafford after four straight losses without scoring a goal.

United are only three games into the new season so it is very early for alarm bells to be ringing, but there is no escaping the fact this has been a dismal start and this side Mourinho has assembled so expensively looks in no shape to challenge for the title.

The manner – as well as the margin – of this loss only increases the feeling of discontent around Old Trafford since the summer.

Mourinho will feel increasing heat but he can rightly point to the pivotal moment when, with United on top, Lukaku missed that simple chance.

There was no lack of effort from United’s players but there was an element of collapse to their efforts after Spurs struck twice so quickly.

But this is currently a disjointed team, with Mourinho appearing to be scrambling to find a solution to the very obvious problems he faces in central defence.

He utilised midfielder Ander Herrera in a three-man central defensive system alongside the old guard of Phil Jones and Chris Smalling – with Eric Bailly and Victor Lindelof paying the price for lamentable performances in the loss at Brighton.

It was obvious why Mourinho was desperate to add central defensive reinforcements, but he was also responsible for the acquisition of Bailly and Lindelof at a cost of more than £60m.

He will also be concerned at the complete lack of a response from his players once Spurs delivered that devastating one-two that effectively settled this game in their favour.

This was a chastening, miserable night for United and their manager.

Why Boko Haram Terrorists Are On The Increase In Nigeria – UN