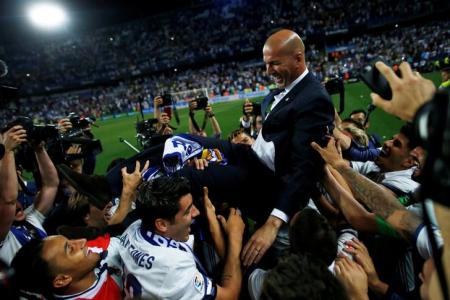 The Frenchman wants to do his next managerial work in the Premier League next season and is keeping tabs on Mourinho’s situation at Old Trafford.

Zidane is currently out of work after he resigned as Real Madrid manager in May just five days after guiding the club to their third
consecutive Champions League trophy.

The 46-year-old also won La Liga with Madrid in 2017, as well as two Club World Cup trophies during his two-and-a-half years in charge at the Santiago Bernabeu.

French newspaper, L’Equipe, reports that Zidane was already making contacts with Manchester United board as he considers taking over Mourinho.

The newspaper claimed that the World Cup-winning midfielder is especially keen on managing Manchester United.

Mourinho is under increased pressure to deliver success to United this season after failing to win a trophy at Old Trafford last term.

The former Chelsea boss, however, has been at odds with United’s hierarchy this summer, primarily over their refusal to sign an experienced central defender before the transfer window closed last Thursday.