Home Education If You Want To Live Really Long, You Had Better Listen To The Secrets Of This 109-Year-Old Woman { Nice Read}
EducationLifestyle 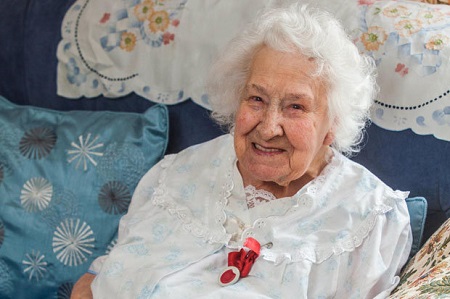 A really old woman who has lived for up to 109 years, has revealed the secret to her incredibly long life.

According to Daily Star UK, Daisy Bastin, who is 109 years old, confessed the key to longevity is her favourite food – fresh onions.

The centenarian believes that the vegetable has kept her young and been very good for her skin.

Remarkably Daisy still lives in her own flat in Glastonbury, Somerset, and continues to do some of her own cooking – always using fresh onions.

She said: “I couldn’t do it without them – they keep me going. They’re good for the skin too.”

Born in Devon in 1908, the senior is the last surviving member of her family in the UK.

Daisy also revealed another secret to living a long life is “good friends and being happy”. Meanwhile the world’s oldest woman said eggs were the secret to her vitality.

Eating three hen’s eggs per day – two raw – is the way Emma Morano lived to the grand age of 117.

Her doctor said that her diet was far from the norm, but was high in protein.

Dr Carlo Bava said: “When I met her, she ate three eggs per day, two raw in the morning and then an omelette at noon, and chicken at dinner.”

Emma Morano, who was the last known survivor to have been born in the 19th Century, passed away at her home in Verbania, Italy, last month.

Her personal doctor announced the news, telling reporters that Emma’s caretaker had called him to say she passed away while sitting in her armchair.

Dr Carlo said the the last time he paid his nearly-daily call on the retired factory worker was the day before her death, when he said “she thanked me and held my hand” as usual.

The mayor of Emma’s home town in northern Italy told local media: “She had an extraordinary life, and we will always remember her strength to help us move forward in life.”

If You Want To Live Really Long, You Had Better Listen To The Secrets Of This 109-Year-Old Woman { Nice Read} was last modified: May 5th, 2017 by Arinze Ago

Really? You Can Catch Sexually Transmitted Diseases From Your Man’s Beard!

14 Most Annoying Bad Habits to Ditch

5 Signs Someone Has A Passive-Aggressive Personality

20 Dangerous Areas In LAGOS To Avoid...

Survival Instincts: How to survive being drowned...