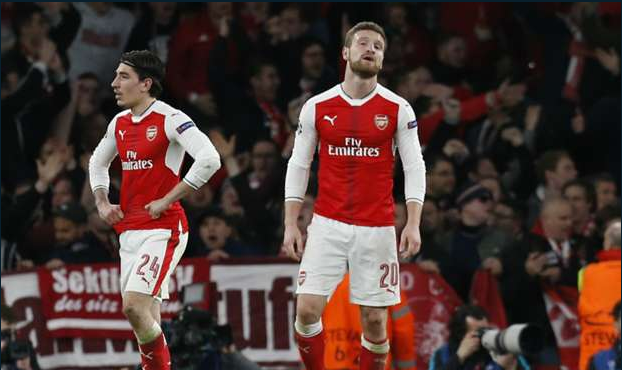 Arsenal defender, Hector Bellerin has offered his apologies to all fans in the wake of the gunners’ humiliating Champions League loss to Bayern Munich.

Arsene Wenger’s men needed a miracle to reach the quarter-finals after a 5-1 defeat at the Allianz Arena in the first leg, but there would not be such a comeback as they were thrashed by the same scoreline on home turf.

“I am really hurt because to see the fans leave the stadium so early,” the Spanish defender is quoted by the club’s official website.

“At the end of the day we play for them, want them to be happy, to be behind us, and it hurts to see them leave so early.

“We have to say sorry to the fans because we want to do better than that. We just need to try to make them happy with the rest of our season.

“We know we have got the players and the potential to do well, we just need to play every game the same way that we started on Tuesday. If we play that kind of football, we can be up there.

“We knew it was very hard for us to come back after that, and we just need to look at ourselves, learn from this situation and focus on Saturday. We have another game, another competition which we know we can do well in and we need to prepare for it.”

Tuesday’s defeat further piled the pressure on Arsene Wenger after Saturday’s 3-1 loss against Liverpool, with the Frenchman’s future at the club still unclear as his contract is due to expire at the end of the season.

Arsenal will look to return to winning ways when they meet Lincoln City in the FA Cup quarter-finals on Saturday.

“We Have To Say Sorry To The Fans” – Hector Bellerin Apologizes After Arsenal’s Humiliating Loss To Bayern Munich was last modified: March 8th, 2017 by Damilare Salami

ANALYSIS: President Buhari, His True State Of Health And The (Mis)management of Information – Premium Times