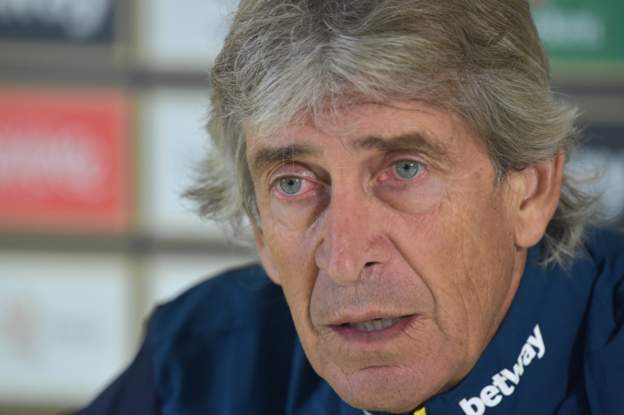 Asked about Jack Wilshere’s departure from Arsenal, Pellegrini fields it as though he’s taken lessons from Henry Kissinger.

“I played here in England for three years playing against Arsenal and before that with Villarreal in the Champions League and Jack Wilshere was always a very good player but I don’t know the reason why he finished his contract with Arsenal or the reason they allowed him to come here.”
Manuel Pellegrini now is asked what he makes of Arsenal’s start to the season under Unai Emery and former manager Arsene Wenger’s departure.

“Maybe Arsene Wenger could not win the Premier League title in recent years but he was always fighting for the cup and for the title for at least part of the season, so Arsenal fans must be very happy for the work he did there,” he said.

“It will be strange not to see him. You always link that team with him.

“My opinion is that you can see what happened at Manchester United after Alex Ferguson finished. They were so used to winning titles and when you make a change it is not easy. At Arsenal it is the same.

“Maybe Arsene Wenger was criticised over the last three seasons because they did not challenge for the title until the end of the season, but to change the team and change the image is not easy.”

Now what about the ins and outs of team selection.

“We will see if we use [Issa] Diop or [Aaron] Cresswell soon,” says the West Ham manager Manuel Pellegrini.

“We have Lucas Perez who came here two weeks ago with Carlos Sanchez, so we have a good squad, and it is impossible for them all to play when they are nearly all fit.

“I always say to them that ‘I need all of you because I need the options available to me’ for the whole season.”

And what of Declan Rice and Michail Antonio, who were left out against Bournemouth after starting against Liverpool on the opening weekend?

“We have most of the squad fit and that means some players will not play,” he adds.

“I don’t think they played bad at Liverpool. Maybe at Arsenal I can make some changes, but there are a lot of reasons why I change the starting XI.”

Pellegrini has also been asked to clarify his comments about supporters leaving the London Stadium early during last Saturday’s defeat by Bournemouth, he said:

“It’s not a criticism of the fans. It’s more that I think the team really needs the fans,” says the Chilean.

“Just to clarify, I feel the fans are very important to us.”

Emmanuel Nii Adom Quaye Strika of “Beast of No Nation” currently begs for survival, has not been paid for role in film