What Alaafin Of OYO’s Olori Will Miss About Him 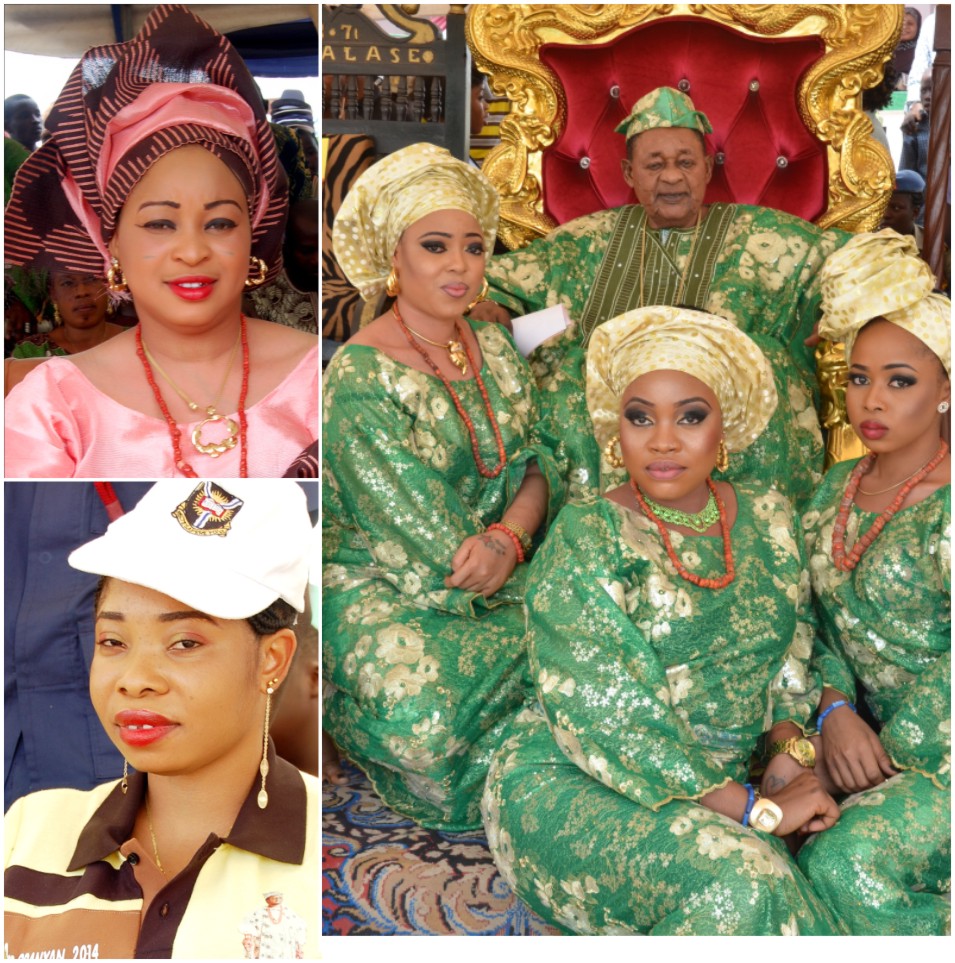 •The Stories Of His Over 20 Beautiful & Stylish Wives

Did you know that the Alaafin of Oyo, Oba Lamidi Adeyemi was the king with the highest number of beautiful Oloris in Nigeria? Yes, he was. No other king has a high number of beauties as Olori’s. Some of them are elderly, who are called Queen Mothers, but the vast majority are young beauties in their 30s and 40s.

Gone are the days when Olori are usually kept hidden in the palace of the king. Today’s Olori step out with their kings. They are also very active on social media. You get to follow them on INSTAGRAM & Facebook.

The late Alaafin of Oyo’s younger wives have become so popular on the social scene right now. We saw them stepping out with Oba Lamidi Adeyemi, the Alaafin of Oyo who is 82 years old. They are Pretty, Stunning and compliment the Alaafin whenever he steps out. Their recent outing was in Lagos about 2 weeks ago.

Alaafin of Oyo is one of the most respected Yoruba monarchs and It is no longer news that he has got a good taste for pretty and young women. As they catch his fancy, Alaafin does not hesitate to make them his beloved wives. We gathered that Alaafin’s wives are up to 18 whereas Ayaba Abibat Adeyemi, the first wife is over 80 years old. There are a few other older Olori’s. But he has some pretty young wives. The wives are Queen Memunat, Queen Damilola, Queen Anu, Queen Mojisola, Queen Ola Badirat, Queen Folashade, Queen Omobolanle and Queen Rukayat Abbey Adeyemi.

Recently, Alaafin’s picture with 7 of his wives went viral on the Internet and it became a topic of discussion as all the wives looked pretty in similar attire. The photo was taken and released to celebrate, Eid-il-Kabir.

During the celebration, the Alaafin took pictures with members of his family, and then 7 of his beautiful, fair-skinned, younger wives joined him in beautiful group photographs to mark the year 2020 Sallah celebration. They were all gaily dressed in the same outfit with similar shoes and bags to complement their outing.

Only Olori Badirah was missing. She wasn’t around. All those Olori maintain a regular Instagram presence and they upload lovely photos of themselves and their children. They also take photos with Kabiyeesi. In one of Alaafin’s interviews, he revealed how he got attracted to all his Oloris.

“I did not propose to any of my wives. They desired to be with me because I sent them to school. After their university education, I told them to leave but they refused and insisted on staying with me here in the palace as my wives. The least educated of them has a Higher National Diploma and is now in the University. I don’t begrudge or offend women. Marriage is an institution that must be defended. Each partner has a role to play in the marriage. My wives have their individual quarters. God has given me some type of ability and grace to keep a woman, especially beautiful women. I don’t disclose my conversations or activities with one wife to another. I maintain a strict code of confidentiality. I have learnt that I must positively make an impact on people and make a great first impression. Of course, they (wives) sometimes have disagreements and conflicts of opinion but I have been ‘graced’ by God to know how to ensure that the conflicts don’t escalate.” Alaafin must have a penchant for taking good care of Olori as many of them decide to spend the rest of their lives with the old monarch at 82.

Some of the queens are business owners while some are busy nursing their children and playing their traditional roles at the palace. One of the beautiful queens is Queen Ola Badirat Adeyemi. Fondly referred to as Olori Ola. She is one of the stunning young wives of the Alaafin of Oyo, Lamidi Adeyemi, making waves on Instagram.

The queen currently has over 280k dedicated Instagram fans that literally praise her dress sense. The queen is known to be very close to the monarch. While the monarch, a boxer and gym enthusiast, regularly steps out with his queens, he always has by his side Olori Ola. She is 31 years old born on November 3rd. She is a Brand ambassador of princess natural, a Brand influencer for elite style, CEO of Ajoke closet, CEO of turban heavens and Queen secrets, skincare. Queen Memunat is also very pretty. Her family photoshoot also went viral recently when she celebrated her birthday on the 11th of May. The pretty and young Queen, Memunat Adeyemi glows differently. She is now dubbed the apple of Alaafin’s eyes. She is also dubbed the palace mother to some other younger queens. She is very stylish, mature, beautiful and very accommodating, no wonder she is well-loved in the palace and beyond. She is also an entrepreneur who deals in selling fabrics. She was all over the social media pages a few weeks back when she celebrated her birthday. Not only did she just celebrate, but she also did a special photoshoot with her family, her husband and 3 kids. Their pictures were all over the social media immediately she posted them on her page and she also went down memory lane on how she has been living like the queen of the Oyo kingdom and how her husband, Alaafin remains the best man in the world. In her lengthy Instagram post, Olori Memunat who marked her birthday on May 11, 2020, shared with her followers on Instagram her experiences in marriage as a mother of three children and a wife to celebrate her new age.

The beautiful queen posted very lovely photos of herself and opened up about dealing with her new life as a married woman reckoning that she has not had a perfect marriage although she is married to a king. She wrote” +1 Today Alhamdulillah! For everything even the trials that makes me closer to You, oh Allah I just want to thank you for making me feel like the luckiest woman in the world every single day. I married the best husband in the world. Another pretty Queen is Queen Anu. She was born on May 31 and is in her mid-20s. She is from Osun State Ede town to be precise but she was born and bred in Ibadan. She attended IMG Moor Plantation for my Primary School Education and finished my Secondary School Education at BENATAD ROYAL College Johnson Awe Oluyole Ibadan. She is currently studying Political Science at the University Of Ibadan. She is in her 300 Level and runs charity work through her foundation underground. Queen Folashade is also very beautiful. She is blessed with triplets for Alaafin. She was born on Feb 17. She runs a skincare and beauty store in Oyo, Tee boss. She shuttles London frequently. The other beautiful Oloris are Queen Damilola who was born on the 5th of August. She just recently gave birth to a newborn baby. Queen Opeyemi Omobolanle has also been married to Alaafin for over 10 years. Her son just celebrated 10 years. Queen Mojisola Ganiyat is also one of the pretty queens, her birthday is on the 10th of June. She has 2 wonderful kids. There is also Queen Rukayat Abbey popularly called Current Alhaja. She is also very pretty and runs a thriving business in Oyo.

What Alaafin Of OYO’s Olori Will Miss About Him was last modified: May 2nd, 2022 by Tayo Oyediji

Why I Decided To Run For OGUN West Senate Seat – YAYI