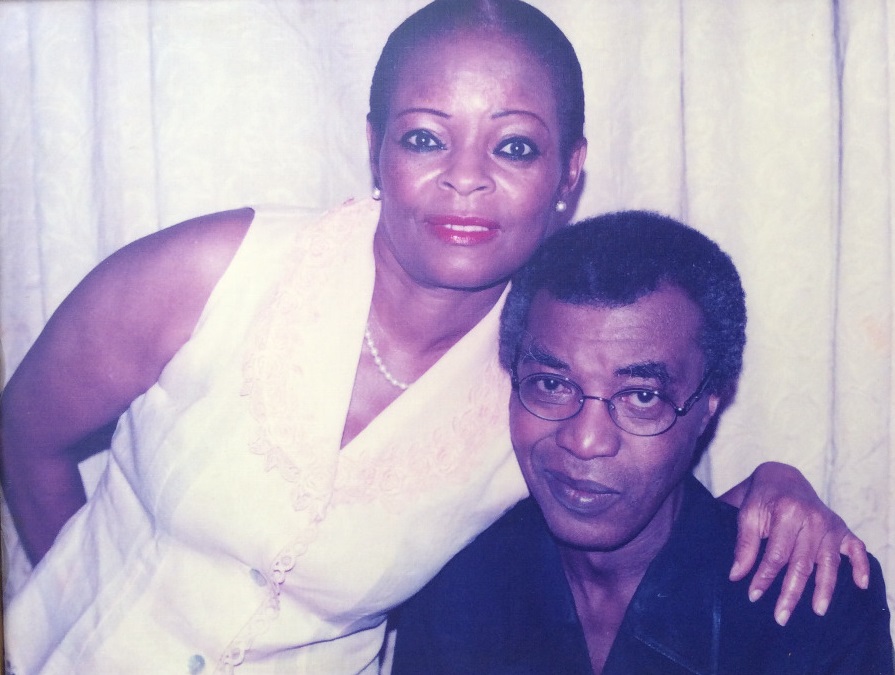 Mrs. Bose Ransome-Kuti, the wife of the late Human Rights activist, Dr. Beko Ransome-Kuti, died a few days ago at 74. She was said to have died of complications from Brain surgery at a Lagos hospital, Gloria Medical Centre, Anthony Village, Lagos.

She died last Tuesday. Women Arise Leader, Dr Joe Okei-Odumakin, said Bose died as a result of “difficulty in breathing”. “It is with pain in the heart that we announce the transition to higher glory of Mrs Abosede Ransome-Kuti, the widow of Dr Beko Ransome-Kuti. “The deceased, who breathed her last at 7:25 pm on Tuesday, December 3, would have turned 75 by January 7, 2020. “She died at Gloria Medical Centre, Anthony Village, after she was rushed from her Imaria Street, Anthony Village residence due to difficulty in breathing. “She was recovering well from brain surgery as the time of her demise. “She was a Board Member of Women Arise of whom we are proud; she is survived by sisters, children and grandchildren.

“Burial arrangements will be announced later by the family,” Okei-Odumakin said in a statement.

Not too long ago, she spoke  to City People Magazine. It was her 73rd birthday interview. It was 12 years after her husband, the late human rights activist, Dr. Beko Ransome-Kuti died. She said she still misses him, so badly. If he hadn’t died on the 10th, Februrary 2006, he would have been 79. Though the medical doctor turned activist is no more, his late wife kept his memory aglow. 2 years ago, she started a football tournament in his honour at Anthony Village, Lagos, where he lived when he was alive.Thursday 2nd August each year, is Dr. Beko Ransome-Kuti’s birthday.

City People Publisher, SEYE KEHINDE got the widow of Beko to talk about their life, as husband and wife and what sort of a person he was. Below are excerpts of the interview.

What made you start the annual football tournament to honour late Dr. Beko Ransome-Kuti?

God gave me the idea. Beko was a fan of Manchester United. So I said to my self: Why don’t we organise a match yearly, instead of just limiting the activities of his remembrance to what the Campaign for Democracy (CD) and other human right groups do. So, this was how I started the 1st edition last year. God was with us that day. The field was full and the kids enjoyed themselves. That’s my joy. It was a day tournament. But this second edition held last week was a 3-day tournament. It started on the 31st of July 2018 up to 2nd August 2018, which is Beko’s birthday. Thats when we ended this with presentations and trophy. He would have been 78.

How do you feel each time you remember him?

I won’t lie to you I miss him. I remember him always. The sad part of it is that he is gone, he is gone and God has been with me. I just realised this afternoon, that I miss him so much, when I broke into tears. I didn’t know where the tears were coming from. I now said, haaa, I am really missing you Beko. Hope you are with us. You are with us.

He did. When he is at home, you will see him watching football. He watched a lot of football matches. When it comes to Man U he is usually super excited. No, he does not go to the stadium.

Looking back now, what sort of a person was he?

Looking back now, Beko was a loving person. But he was also a tough man. When he is coming I always feel frightened. He was a loving and caring person. I miss him for that. He loves good food. He does not eat much but he likes the best.

How do you explain his tilt towards human rights activism? How can someone who studied medicine ended up a radical?

In life some people develop different interests. He really, really enjoyed his human right activism more than his medical field, because he was committed to that cause. You will see him working on and on. He used to work late at night. He operated from his office, here at home. Atimes I will go to him to ask: won’t you sleep? Leave them alone. He will say if we don’t do it, who will? I used to tell him that somebody else will do it ooo. You will be surprised that when you are gone things will still be moving. But truth be told, he had passion for that, just like their mum. It runs in the family.

When you met Dr Beko, what was the attraction?

Their mum and my mum, the Thomas are from Abeokuta too, Meadows. They are related. I went to Mrs. Kuti’s Class in Abeokuta. Their mum really liked me. I don’t know why. Among the wives I was the favourite, probably because I know how to make Moinmoin and I know how to cook. We are related from my mother side.

I can’t really remember the details of how we met. I think it was Sam Amuka’s brother. He saw me at a party. Beko is the shy type. He couldn’t come and approach me. So, he now sent Sam Amuka’s brother to meet me. He is late now. That one came and told me somebody wanted to see me. I went to that one’s house. So, the gentleman was there, sitting, waiting for me. That was how he approached me and we started our love.

What were the striking things you saw in him?

He is an attractive man, Gentle, but tough inside. He was fond of me, probably because of my figure then. We call ourselves Dear. I call him Dear Mi. Atimes, he just calls me Bose. Thats Beko for you.

Will you say you also like him because he is real?

Yes he is real. Beko is real. There are no pretences. Yes.

When you talked about Mrs Kuti’s class in Abeokuta was it really a class or a school?

It was a school. They just called it Mrs. Kuti’s Class. Its a school in Abeokuta. I was born and bred in Kano. From Kano, I went to Abeokuta. My mum wanted me to be in the Boarding House. I joined Mrs. Kuti’s Class (the school). I stayed in their Boarding School. When I finished I went to Yejide Girls Grammar School in Ibadan. From there I went to Pitmans College in London. When I finished I came back. He wanted me back. I came back and started working with Sandoz Pharmaceautical Company as a Secretary. Then, that was the in thing, being a Secretary.

My husband didn’t want me to work. After Sandoz, we started the dry cleaning outfit, Snow White Cleaners. There was Rapid Dry Cleaners, then, Snow White Cleaners. I ran it for about 10 years or more. On the board, we had his friend and I didn’t want any quarrel so I opted out and I started my trading. I went into interor decoration business because I like nice things.

I do interior decoration. I brought in fancy goods to decorate the house to beautify the house which I still do till now.

How do those in your generation take the transformation of Nigeria, from what it was then to the new Nigeria now?

Things have gone hay wire now. Some of us have withdrawn into our shells because some of us want to have our sanity. I can see that things have really changed. How can it be better? Most of us, we talk, talk talk, no action. What do you do to change things. Thats always my question. I am kind of fed up so I have kind of switched off. And I thank God its not by my power but its God. He has given me that peace of mind.

So, all I do now is to do my business. I really don’t have too many friends. All I do is to go and play my Golf, go to church and go to work. I go to my shops when I feel like. I stay at home and rest. I feel contented. I thank God for that. I pray for one thing. I pray to God to give me that peace, which he has given me. I am a contented person.

I don’t buy all these aso-ebi, I don’t flaunt jewelry or outfits around because I see it as fake life which I know very well. Why would anybody feel happy to go and borrow money to do her daughters wedding. How will you go borrow money to buy aso-ebi and jewelry to look good. I don’t seem to understand. If you borrow the money how do you pay back.

In those days, you get sprayed at parties. So at least you can make your money back. But now they don’t spray as much. So if they don’t spray you what happens. Its all fake life and they do it because of man.

I don’t envy all these ladies ooo, I am a very simple person. If you like, drive your jet there, give me my bicycle, let me ride and I am there.

When you were 70, three years ago, you planted 70 trees. How did you come up with that idea?

God. I can’t say its my idea. I met with the Lagos State people and they sold 70 trees to me, 70 plants. I just organised a small event. It was beautiful. They got me Baptist Academy mini stadium. They allowed me to plant it there. That was 3 years ago.

How have you celebrated your subsequent birthdays?

How did this your simple lifestyle evolve over time?

Its God. Through God. Each time I pray to God, I pray for contentment, peace of mind. I don’t want to be like so many ladies who get drunk, drinking bear in public.  Haaa! I am just lucky that God gave me that life style.

Could it also be because of your parental influence, training and upbringing?

Yes. It might be because my mum is a very easy, quiet, strict woman. So is my dad. When my dad says Bosede, don’t leave this room, you dear not leave. From my upbringing, my parents are strict people.

What have you gone through being Beko’s wife? How did you cope throughout that period of military dictatorship? Were you not scared?

I wasn’t scared. I had everything I needed. I am not that kind of loud and flambouyant person who put all the jewelry on. How can I buy 5 yards of a fabric for N250,000. Its crazy. I prefer Ankara fabric. It makes me look simple. I don’t understand Nigerian women ooo. When they bring aso-ebi of N50,000, I tell them I don’t buy aso-ebi. I don’t take aso-ebi, unless you want to give me free. What I do is to wear the colour you pick. What I have is what I wear. I will honour you with my presence. My presence is more than money for aso-ebi. Its only God that will help us change this country.