Home News Who Is The Best Dressed South-West Governor?
News 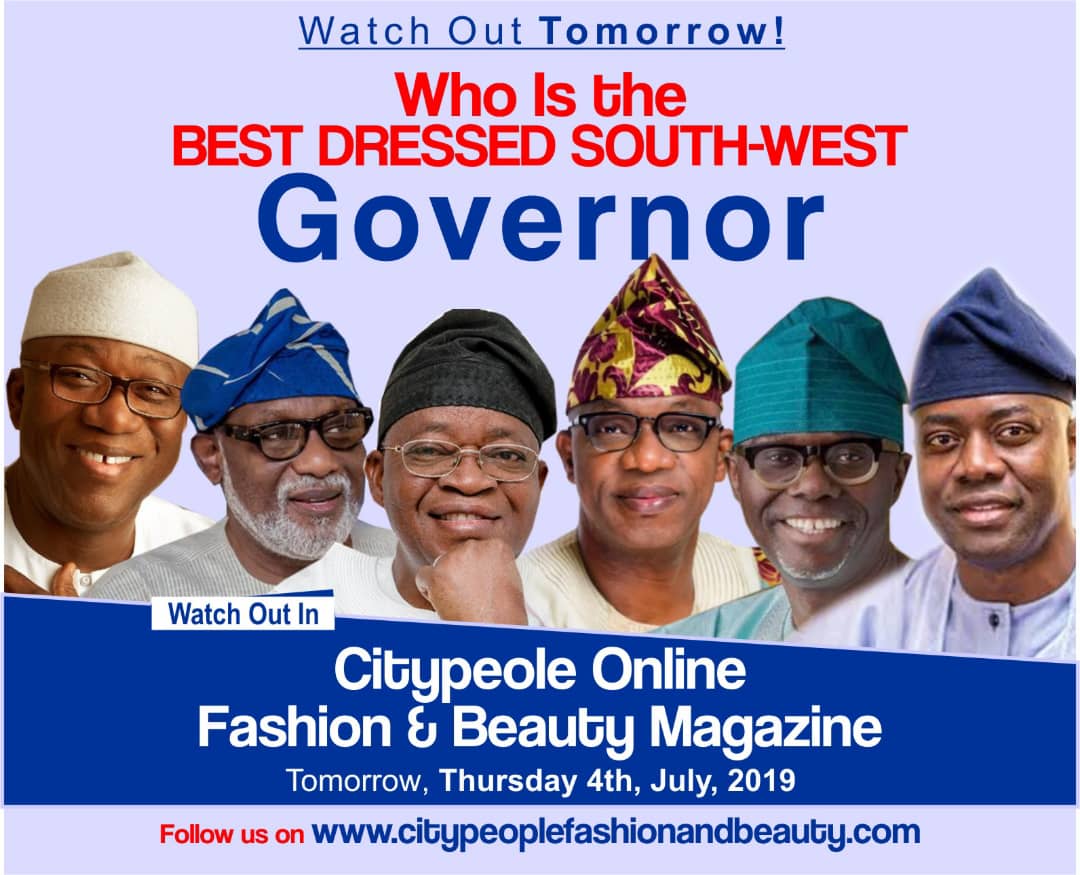 Have you ever wondered who fits the bill of all the 6 South West governors?

Can it be Ekiti governor, Dr John Olukayode Fayemi ( PhD)?

Can the trophy go to Osun governor, Mr Adegboyega Oyetola ?

How about new Oyo governor, Engr Oluseyi Abiodun Makinde? Do Engineers pay attention to their dressing?

How about new Ogun governor, Prince Dapo Abiodun? Does he fit the Bill?

What do you think?

Let us check out their style. Let’s start from Ekiti state.

There is no doubt that Gov Fayemi is a very stylish man. He has this refreshing look, style wise. Although many see him as a bookworm and an academic person, his involvement in grassroots politics has softened him up.

He does more of natives. His trads are clean cut. He has come to carve out for himself a unique fashion style that works for him. He seldom wears agbada. But when he does, the designs done in the neck area are done the old traditional way.

He prefers the functional kaftans without the agbada. His natives come in simple designs matched with appropriate shoes and accessories to match. Not for him any elaborate embroidery.

He seldom wears suits except when he is abroad. He is a functional person. He is a simple person. And he loves for his outfits to reflect that. lt takes him only a few minutes to dress up.

He does not waste time when he is dressing up. He wears minimal accessories.

He does not joke with his Awo cap. He has a huge collection of caps. He buys them abroad. He buys some here. That is to show his love for the late sage Awo. intellectually, he shares Awo’s philosophy. He is rigorous and thorough.

His wife, Erelu Bisi Fayemi has been a great influence on his fashion style. She dresses well too. There are similarities in their dressing. The only difference is Erelu Fayemis bias for ethnic fabrics which she promotes.

Enough of JKF. Let’s look at the man they call Aketi in Ondo state. The governor of Ondo state, Arakunrin Olurotimi Akeredolu (SAN) is also a stylish man. He has always been stylish since his good old days in Ibadan.

He has always been a man of sartorial elegance. He is a lawyer. So he has been used to years of wearing white shirts and black suits.But he has stepped up his fashion style .He does not have a particular look. He wears whatever he feels like wearing.He loves designer outfits.

He has always been a man who loves to dress well. He is someone who pays attention to his looks.He has a trademark  grey beard that singles him out in a crowd.

He doesn’t keep to a style. He too does not like Agbada. He loves functional outfits.

He is a bit conservative in his dressing, nothing elaborate, nothing loud.

He is the typical Yoruba man who keeps to the conventional way of dressing. That is why his Agbada designs are conventional designs.

When he was in Lagos he wore more of suits. He was a corporate player then.  But the moment he relocated back to Osun to play politics he hung his suits and took to trads.

Dressing for the Osun governor means looking respectable, not trendy. His dressing gives him this dignified look and elegance.

He loves to keep it simple. He is not adventurous at all with his dressing. He keeps to his white Agbada and his Yoruba cap worn the old way.

But he loves good shoes and wristwatches. He is not keen or eager to be seen as a superlative dresser. He can’t be bothered. All he desires is to dress well and look respectable. He surely does

How about Prince Dapo Abiodun? the Ogun state governor? He is a great dresser and stylish too.

Have you noticed that the new Ogun governor Prince Dapo Abiodun is a very stylish man?

Yes,we can tell you that. He is of good grooming . And he has a taste for good things.He oozes class both in his dressing and surrounding s.

Have you seen him in suit or native before? He always looks stunning. Whenever he is formally dressed he completes it up with all the right accessories. And when he is in native he usually complements it with his Awo cap (he has a rich collection) or his Ijebu signature cap.

Don’t forget that he is an Ijebu man.He is a bit conservative in his dressing. The embroidery on his agbada are usually the old school type.

He likes the classic look.

Have you also seen his interaction with people.He is always cool,calm and collected. He usually takes his time to thing through issues. And when he talks  he usually picks the right words.

He is blessed with a good  body to carry his outfits.He works out at the Gym every Saturday morning.

How about the new Oyo governor, Engr Seyi Makinde? Though by nature he is a bit conservative and traditional in his ways, he dresses well. He is stylish in his dressing  He wears good natives. He also wears lovely trads.

As an Engineer many didn’t think he will pay attention to his dressing but he does.

But there is this side to Gov Makinde many don’t know. It is his love for dressing well and looking good all the time.

He is neat and clean. He is smart. Be it in native or formal outfits, he looks good.

He is stylish in his dressing. His dressing fits his good looks. He is blessed with a  handsome look.

Let’s talk about Mr. Babajide Sanwo Olu, the new Lagos governor. He is a great dresser. He has always been a good dresser since his days in the corporate world. Those were the days of wearing black and grey suits. And he was always looking dapper in his suits.

Of course, when Asiwaju Bola Tinubu brought him into government he started wearing more of traditional outfits.

These days and since he stepped into the governorship race he has stepped up his fashion style.

He looks good in suits so does he in natives. He loves looking good all the time. He has a frame that looks good and he wears what suits him.

He looks dashing all the time. He wears top designer labels from his shoes to his glasses. Of course, he likes good wristwatches. And wait for this. He smells nice. He is very, very cosmopolitan in his dressing. He is urbane and clean.

So, who fits the bill? Who is the best-dressed governor in South-West? Your bet is as good as ours.

Who Is The Best Dressed South-West Governor? was last modified: July 8th, 2019 by Reporter