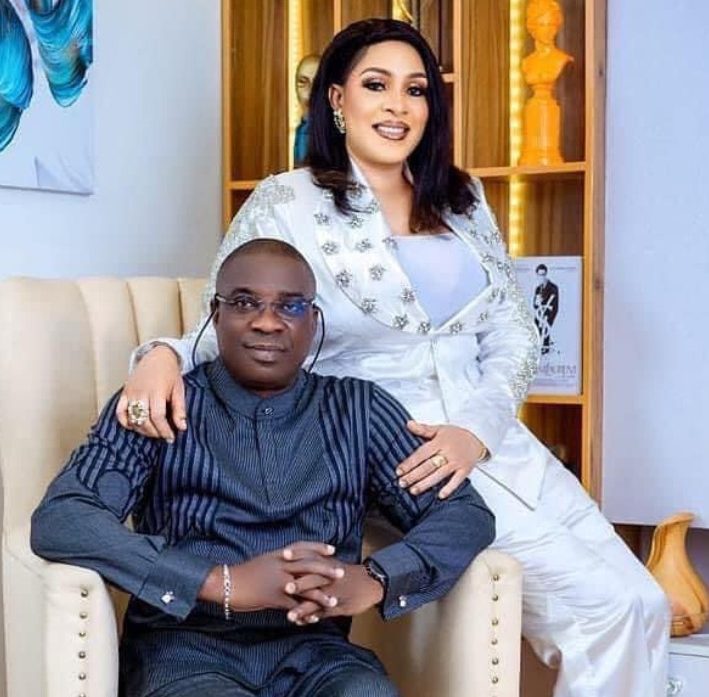 It’s no more news that King of Fuji, Kwam 1 is happily married to the very dashing and beautiful Emmanuella Aderopo, whom he fondly calls “Nuella Ajike Mi”. When these two love birds tied the knot in Abeokuta, Ogun State, November 2021 and always kept showering each other love in real life and on social media, many concluded it’s a normal thing, because she is a new bride and the love will gradually fade away, and many will get to see less of social media displays of love and affection from both parties. That tends not to be the case as their love keeps waxing stronger on a daily basis.

For those who are not familiar with Kwam 1’s new bride, let’s refresh your memory. The very pretty leggy queen and mother of three from a previous marriage is titled Chief in Otun Igbehin, Abeokuta.

She holds the traditional title of Otun Iyalode of Igbehin in Abeokuta. Her late father, Stephen Gboyega Odebiyi was a respected Egba Chief. He retired from the Nigerian Ports Authority but became a Customary Judge after retirement.

Emmanuella has indeed captured Kwam 1’s heart, as she is the first of his wives whom he would openly flaunt and praise every now and then on his official page on social media. The musician uses every opportunity to declare his undying love for his new queen.

Emmanuella Aderopo is a businesswoman in her 40s, she runs a gift store as well as a liquor store in Lagos and she maintains a very cordial relationship with a good number of society ladies.

Like her husband, she also uses every given opportunity to express and display her love for her husband, most especially on social media.

She has gradually won the hearts of not only her husband, but also the aged mother, who is 103 this year, and her husband’s friends and children, that they all keep singing her praises.

Just a few days ago, the King of Fuji Music clocked 65 years and Emmanuella treated her husband to a surprise birthday, with his family and friends present.

She started the day with a special message on her page which reads “when a king finally finds his queen, it seems magical and a puzzle to the whole world, take love, multiply it by infinity, and take it to the depths of forever and you still have only a glimpse of how I feel for you Olasunkanmi, my dearest. Never in a million years did I think I would be this happy to have the perfect man standing behind me.

My hero.. you have proved to me I can conquer the whole world with one hand tied behind my back, as long as the other is holding yours, you have given my life a new dimension. All my life growing up, I had my late father as my strength until you appeared into my world after his death. You are the source of my happiness that I won’t let go, darling. For your special day, I can’t help but remember my most special day, the day I said: “I do”. The day that I became the happiest woman in the world, together we are inseparable, together we are a team, together we are just as hot as can be my love, we will grow old together gracefully and watch the sunset of our lives with our hands held, eyes locked and lips sealed. Happy 65th birthday to you my companion, comforter and friend.”

She went ahead to treat him to a special 65th birthday celebration in his mansion in Ogun State, with a drum and beautiful musical instrument cake, which he really loved.

There is this saying that family is everything, she got all of Kwam 1’s children, both home and abroad to send a special video message to wish their dad, happy 65th birthday. One particular thing many uses in describing Emmanuella is the fact that she is humble, accomodating and very friendly.

“Unlike many wives who chase their husband’s friends away or frown at them, when they visit, she brings them together, and this made most of Kwam 1 friends like her more. According to them, her humility is second to none.

Kwam 1’s mother, who is 103 years, revealed Emmanuella has shown her love more than she can ever imagine. According to her, she makes it a point of duty, to bring her from her house to spend weekends with them. She makes her feel so loved and provides more than enough, even though she lacks nothing, and the bond between them is also stronger because her mum and Kwam 1’s are from the same place and they speak the same dialect.

Kwam 1, on his own, revealed that there is this special inner joy and peace of mind he gets since he got married to Emmanuella and it is also evident when he is on the stage performing.

READ ALSO: WHY I WANT TO BE THE NEXT APC YOUTH LEADER – LAGOS POLITICIAN, DAYO ISRAEL

AFRICA’S BIGGEST FOOD AND DRINK FESTIVAL IS BACK!

How OLUWO Of IWO Fell In Love With KANO Princess