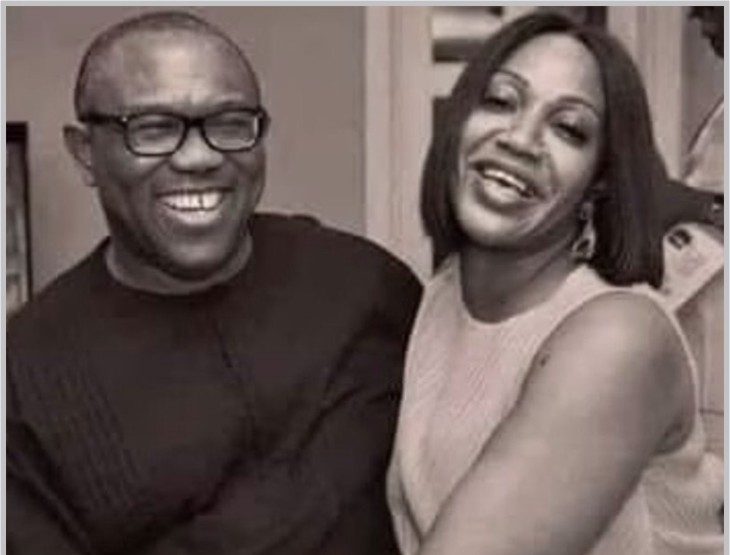 •Details Of How They Differ Revealed!

Former First Lady of Anambra State, Mrs Margaret Obi is the beautiful wife of Labour Party presidential candidate, Peter Obi, who served as the Governor of Anambra State for 2-terms. She intensely supports her husband in all of his political moves. She is usually at the forefront of every campaign he holds.

The former governor cannot be less grateful to God for the wonderful gift of a wife who radiates not only beauty but humility. Not minding her uncommon cerebral power, she has proved both unassuming and resilient in the face of challenges. Her accessibility to people, irrespective of class or calling, is accentuated further by her deep conviction that people should be their brother’s keeper. In fact, her kindness stands her out as rare.

It is common knowledge that some of the many attributes of ex-Gov Peter Obi are his quietness, humbleness humility and prudence in spending. He is known to always be a very modest and reserved man, even in his lifestyle. Looking at him, there are no airs around him and he portrays himself as just a normal citizen of the state even when he was in power. But, he is the opposite of his wife who complements him greatly.

She is a beauty to behold and her fashion sense is top-notch. Meeting her, you will not but notice that she is a stylish woman. She can be dubbed one of the Igbo celebrity women who rock Lagos parties, and not only does she rock these parties, she appears in beautiful attires and we also scooped, she is one of the few women who adorn diamond pieces. Many times without a number, she has attended Owambe parties and had her face beautifully made up by Banke Meshida of BMPro and her neck dazzling in exquisite diamond jewellery.

Frequently dressed in costly attire, this sophisticated woman lends credence to the saying that diamonds are a woman’s best friend. She has the choicest collection of diamond jewellery. A fashion enthusiast, the well-dressed mother of two, who is in her 50s, is attractive and blessed with an elegant figure and she is the cynosure of all eyes whenever she steps out for events. She is very adept at combining her clothes and diamond pieces.

She has them in several colours and designs. It is not uncommon to see her at A-list parties sporting some of the most exquisite jewellery.

Beyond her exquisite style, Margaret also has an uncommon knack for business. In addition to wearing clothes that depict her wealthy status, she knows how to turn heads when she attends parties. You can smoothly describe her style as modern, chic and glamorous.

Whether she is wearing formal or casual attire, she never fails to accessorise with expensive-looking diamond jewellery.

She loves sparkly pieces that amplify her beauty.

These are many of the attributes which make her complement her husband. These are also the reasons why ex-Governor Peter Obi does not joke with his wife. Margaret Obi is not just a wife but one who doubles as a dutiful mother to his amazing children. It was gathered that when ex-Gov. Peter Obi became the governor, and some of his private businesses were being run by his wife who run them well, with multiplying effect. She is also an ardent Catholic who never jokes about her religion. She belongs to many societies in the church and complements her husband’s status as a knight in the Catholic Church, one of the top hierarchies in the Catholic Church where a man is not meant to have 2 wives. Her marriage, which started over 30 years, ago, has produced 2 lovely children, Gregory Peter Oseloka Obi and Gabriella Nwamaka Frances Obi, who are doing very well in their respective fields. She caught the attention of her husband over 3 decades ago, they courted for a while and sealed their relationship up with a blissful marriage.

It is important to know the strong woman who has been behind Peter Obi, during his good times and bad times, is no other person than his wife, Margaret Brownson Usen.

The amazing couple got married in the year 1992. She was the brain behind her husband’s National Gender Affirmative Action, which encouraged at least fifty per cent slots for women under Obi’s administration when he was the governor.

Margaret is known for her humility, despite her intelligence which she kept hidden while working intensively and inconspicuously to garner support during her husband’s administration. Her husband has sung her praises times without number, for being a special part of him, hence the reason he does not joke with her. She is also known for her fierce devotion to women’s empowerment and child protection activities. She facilitated the distribution of equipment grants to women co-operatives that are engaged in dry season farming.

Thus, promoting their access to factors of production and enhancing their capacity to support their families. She also facilitated the establishment of Family Courts in the state’s Ministry of Women Affairs and Social Development (MWASPD) to deal with issues of child abuse and violation of women’s rights, especially widows’ right to inheritance. She worked in close collaboration with the State Ministry of Women Affairs and Social Development. She worked closely with the National Agency for the Prohibition of Traffic in Persons (NAPTIP). Similarly, she has assisted in the setting up of the graduates of the state-owned Vocational Skill Acquisition Centre to run their own businesses in the spirit of self-reliance. She sponsored the participation of an Anambra Youth living positively in the International Conference of AIDS in Mexico in 2008. She initiated the periodic distribution of Nutritional Grants to women living positively in their support groups as the chairperson of NAWOCA, Anambra State Chapter. She has consistently diversified the scope and organization of the Annual Children’s Christmas party in the state. In pursuit of an end of gender-based violence and the promotion of gender equity; she collaborated with the MWASD to organize a road carnival around the major roads in the state capital, calling for an end to violence. She facilitated the distribution of equipment grants including irrigation machines to women co-operatives.

In the area of the Rights of Children to participate, she has assisted the MWASD to inaugurate the 3rd Anambra State Children’s Parliament. She was the one that facilitated the extension of immunization and other essential health care services to the remotest parts of the state, in collaboration with the State Ministry of Health (SMOH) and the Institute of Child Health (ICH) of the University of Nigeria Teaching Hospital, Enugu. She consistently reached out to mothers of multiple births with great assistance in order to assuage their burdens of child-rearing. She consistently assisted skilled women and girls and physically challenged persons with equipment grants.

The most outstanding landmark accomplishment of this woman, with incomparable altruistic disposition and maternal love, was her tour of 177 communities of the state in 2008; during which she instituted two demand-responsive and community-specific Intervention Funds viz: Women Economic Empowerment Support Fund and Orphans & Vulnerable Children’s Welfare Sustenance Support Intervention Fund. These Funds in their first phases of implementation received 10 women and 10 children from each community. The women were given grants to boost their trades of livelihood while the children were given scholarships. Worthy of noters that the initiative was the first of its kind in the state. Never in history has any Government Official or Agency, Philanthropists or Organizations, or even the past first ladies have undertaken such giant strides with such an incredible reach and feeling—taking succour to the doors of those who desperately need it. This is what Mrs Margaret Obi is all about. She does not make noise but her achievements speak for her.

Her darling husband, who was born over 60 years ago, is a devoted Roman Catholic. He is the Chairman of Nigeria’s Security and Exchange Commission. Obi was Chairman of Next International Nigeria Ltd, then Chairman and Director of Guardian Express Mortgage Bank Ltd, Guardian Express Bank Plc, Future View Securities Ltd, Paymaster Nigeria Ltd, Chams Nigeria Ltd, Data Corp Ltd and Card Centre Ltd. He was the youngest Chairman of Fidelity Bank Plc. He was recently appointed the Chairman of the Security and Exchange Commission (SEC) by former President Goodluck Jonathan after the 2015 general election. on October 12, 2018, Peter Obi was named as the running mate to Atiku Abubakar, the People’s Democratic Party’s Presidential Candidate in the 2019 presidential election. He is now the flag bearer of the Labour Party as the national presidential candidate.

Peter Obi is a native of Agulu in Aguata Local Government Area of Anambra State. He had his Secondary Education at Christ the King College, Onitsha and bagged a degree in Philosophy in 1984 at the University of Nigeria, Nsukka.

Peter Obi is a businessman to the core. He has held several managerial positions in different firms and companies. Chief amongst these companies are Next International Nigeria Limited, Guardian Express Bank Plc, Future View Securities, etc.

TALES OF A MATURE SINGLE