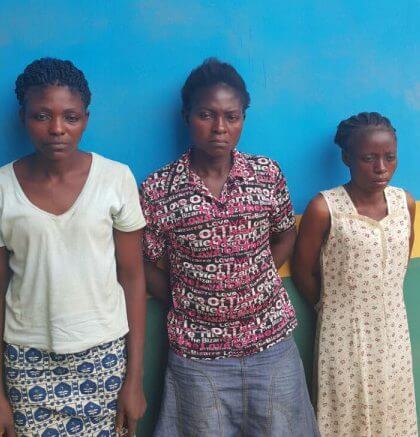 Three women have been arrested by the police in Ogun over the mysterious death of the lover of one of them in Mamugba community, Sagamu Local Government Area of the state, Premium Times reports.

The spokesperson of the police in the state, Abimbola Oyeyemi, who confirmed the arrests on Monday, said the suspects connived to dump the remains of the victim in the bush.

He said, the man had visited to spend the night with his lover‎, identified as Rukayat Bashorun, but died in a mysterious manner.

“The Ogun State police command has arrested three women namely: Rukayat Basorun 37, Omobola Shodimu, and Aanu Owoade, for murder. The suspects were arrested when information got to the police that they secretly dumped a corpse in a bush”, he stated.

The police spokesperson added that the Divisional Police Officer for Ogijo, Tijani Mohammed, who received the information led his officials to the area at Mamugba village, Simawa where the main suspect, Ms. Basorun, was arrested.

“Investigation revealed that the deceased happened to be Rukayat’s lover who came to spend some time with her but died in suspicious circumstances in the house of the suspect.

“Rukayat then connived with her two other accomplices to take the body and dump it in the bush”, he emphasised

Mr. Oyeyemi said, on interrogation, Ms. Basorun confessed that the deceased was her man friend who cameto visit her but suddenly fell sick.

“She stated further that she took him to a private hospital but the money charged by the hospital was too much for her to pay which made her to take him to an undisclosed clinic where she said the man gave up the ghost”, he stated.

“When asked the reason why she decided to dump the corpse in the bush, she could not give any reasonable response”, Mr. Oyeyemi stated.

The police spokesperson said the corpse had been recovered and deposited at Olabisi Onabanjo University Teaching Hospital mortuary in Sagamu for autopsy.

He said the Commissioner of Police, Ahmed Iliyasu, had ordered the immediate transfer of the suspects to the Homicide Section of the State Criminal Investigation and Intelligence Department for further investigation

Woman Connived With Friends To Dump Her Lover’s Body In The Bush After His Death was last modified: March 2nd, 2017 by Reporter