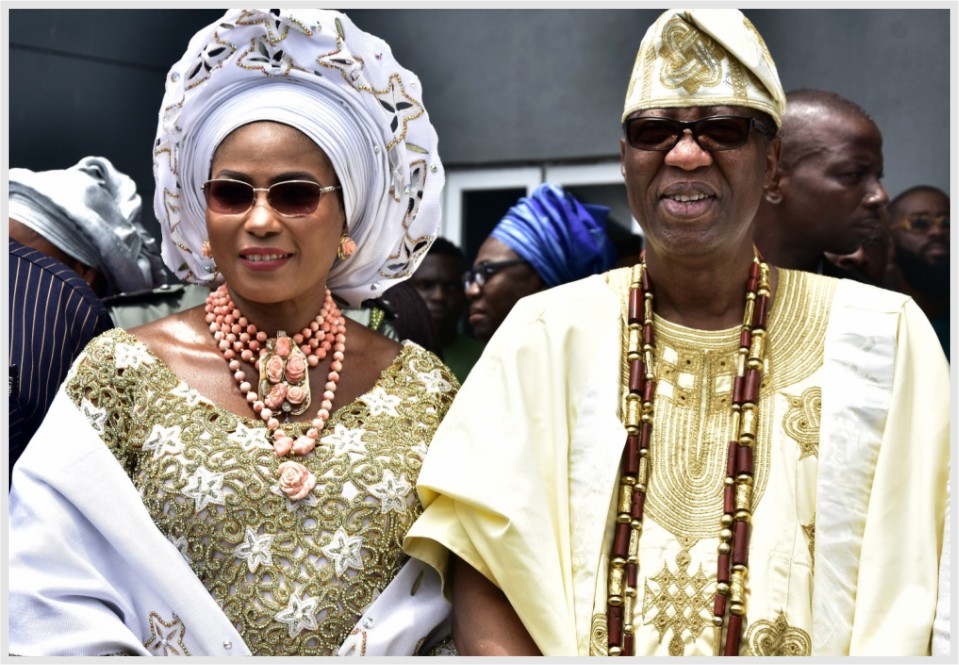 Yeye Olufunke Daniel, wife of Ogun State former  Governor, Otunba Gbenga Daniel is a virtuous woman. Some choose to call her a blessed woman. Seeing her at Olurotimi Daniel’s  Wedding a few days back, she looked so stylish and fashionable. She always dresses well. She is always on point. She forever looks elegant, glamorous and gorgeous.

Her carriage, finesse, mien and beauty became conspicuous as she stepped into Agungi residence of her daughter-in-law, Nafisat Mammud.

She was dressed in white fully-embellished hand-cut aso-oke sewed into classy Iro and Buba. Of course, Yeye Funke Daniel is known to be one of the most stylish and fashionable former first ladies in Nigeria. She was very fashionable throughout her reign as Ogun First Lady and she has never slowed down even after leaving office. Don’t also forget that Chief (Mrs.) Olufunke Daniel is an accomplished fashion designer who runs Laurels fashion, a high-riding outfit. She is the Chief Executive Officer of the firm that has been running for over 20 years. She was once quoted to have said: “I have always been in fashion. I design what my husband wears. I design everything my husband & I wear at my shop”.

Though this woman of substance always loves to look simple in Iro and Buba, but unlike those who complement their attires with 18-carat gold and diamond, she always settles for royal beads fondly called “Iyun, which is mixed with pearl and 18-carat gold as a stopper in between.

Many were admiring Yeye Olufunke Daniel’s simple, yet classy attire at the Thursday engagement, as she dazzled at the grand reception, which took place at Queens Park on Ligali Ayorinde Road, Oniru, Victoria Island. She stepped into the hall fully clad in cream colour, matched with exclusive fresh lace, and frilled it with a luxury light peach coral beads. Many couldn’t take their eyes off her as she took her seat beside her hubby of over 30 years.

There is no doubt that this celebrity couple is so much in love too. One could mistake them for a young couple still in love. They admired each other and beamed with a smile at intervals. A few minutes past 2 pm, when the former Governor, Gbenga Daniel, stepped out to give his vote of thanks, he eulogised his pretty wife for being a pillar of support. Hear what he said: “And to my darling wife, Funke, thank you for the love and support. I love you so much”. This got his wife, Yeye Olufunke, smiling, while the guests gave a round of applause. How did Yeye Olufunke Daniel meet her hubby, OGD? What has sustained their marriage? What has brought them this far? Speaking with Otunba Gbenga Daniel wife on how she feels seeing her son getting married, she said: “I feel so happy and excited. I have got another daughter today and it makes a great difference in the Daniels family. So, we are all happy and excited”.

What is the secret of a successful marriage? “Well, patience and you must have trust in God and let God be the head of the family and be submissive to your husband and you will see that you will enjoy every bit of the marriage”. This cool-headed stylish politician wasn’t flattering as she spoke on what has sustained her marriage to a politician for over 30 years. “I am one of the luckiest women on earth. It is not an easy thing to be married to a politician, you must be highly accommodating to be a politician’s wife”.

You met your husband at a bookshop, what was the first thing you saw in him?

“Intelligence. I saw that in him and I was awed to stick to him forever. It may amaze you to know that Yeye Olufunke Daniel, who many thought would be in her mid-50s is turning 58 in the next couple of months. City People couldn’t help but ask when her next birthday would be. “My next birthday is November and I will be turning 58. Speaking on the secret of her youthful look, she revealed that doing everything in moderation has helped her too.

While many married women prefer to call their husbands. “Darling, Sweetie”, the calm wife of OGD revealed that she calls her husband “Otunba”. What has brought her this far at 58? “It is patience, God and hard work.” What is style to her? “Style is wearing what is comfortable”. She had her secondary education at the Baptist High School, Iwo in Osun State where she imbibed discipline and spiritual sound Baptist education. She was made the school games and athletic prefect in her final year. She later enrolled at school of Basic Sciences at Ogun State Polytechnic now Moshood Abiola Polytechnics for GCE advanced levels course and later proceeded to the University of Ibadan, where she studied Agriculture Biology and came out in flying colours.

After graduating from the great U.I and served her fatherland, she later joined Lever Brothers Nigeria Limited, where she worked for many years before setting up her own business.