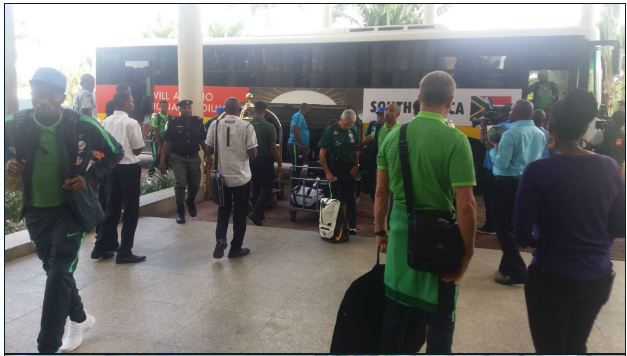 The Bafana Bafana of South Africa have landed in Uyo, Akwa Ibom on Thursday afternoon ahead with a 25-man killer squad.

This is to boost their chances of booking a place in the next African Cup of Nations.

Nigeria play host to the 1996 Afcon winners at the Godswill Akpabio Stadium on Saturday, a game which will to a large extent determine who plays in the next Africa Cup of Nations.

Stuart Baxter’s men boarded Air Peace 4P7338 plane from Lagos at 11:00 WAT to Uyo, where the encounter will take place.

After checking in at Le Meridien Ibom Hotel & Golf Resort, they will have their first training at practice pitch of Godswill Akpabio Stadium.

All 25 players will take part in the practice session, including captain Itumeleng Khune.