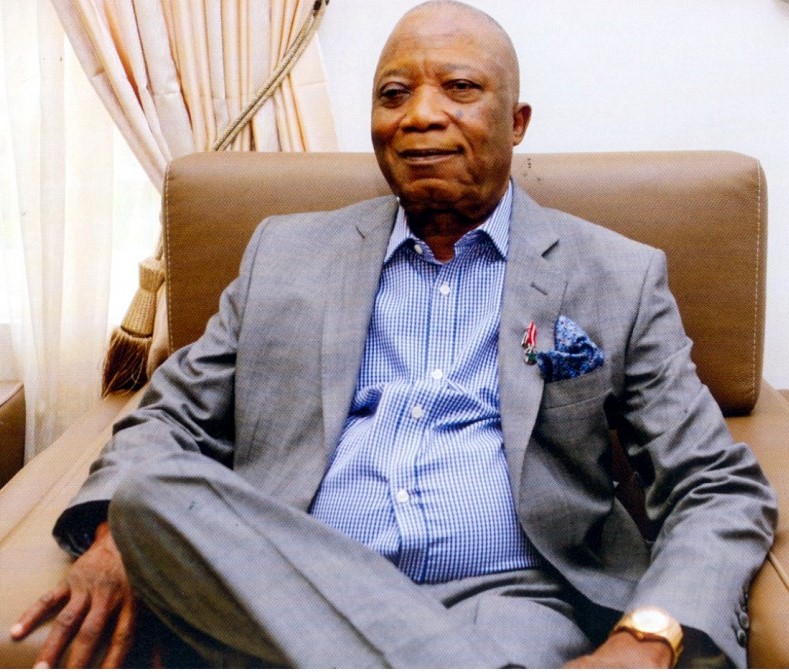 •How He Plans To Shake IFE For 2 Days

As you are reading this, preparation is in top gear in the historic city of Ile Ife, as a popular billionaire, Sir Kesington Adebukunola Adebutu, the Premier Lotto Boss prepares to become the new Odole Oodua of Ife, which will be conferred on him by His Imperial Majesty, Oba Adeyeye Enitan Ogunwusi Ojaja 11.

The event, which will take place on 18th of October, 2019, will witness a huge turnout of prominent personalities across the world as Sir Kesington becomes the 3rd Odole Odua of Ife. Not only will Baba Ijebu get a title, his 2 pretty wives, Dame Caroline Adebutu(Kjw) will also become “Yeyemode Odua“, while his second wife, Yeye Kofoworola Adebutu, will become Yeyerewa Oodua.

The historic event, which is going to be a Blue affair, will have an array of prominent Nigerian personalities who will storm Ile Ife from Friday morning to attend the Pre-event night on Friday before the event proper, which will take place on Saturday 19th of October.

As we speak, over 100 rooms have been booked at various 5-star hotels in Ile Ife. Many of his friends are also going to support the new Odole, who says he is not ready to take up any title again after the highly revered title of Odole Oodua of Ife land. Though no Aso-Ebi has been booked, but many of their friends will come out in expensive white attires, matched with royal blue caps for male, and royal blue Gele for Women.

The pretty wives of Chief  Adebutu, who are stylish,  will also look their best for the event. Dame Caroline Adebutu, who is still stylish despite her age will rock the mother of all fabrics, while Chief (Mrs) Kofoworola will follow suit. They have both travelled far and wide to buy the best diamond piece from Italy to rock the party.

Permit us to tell you that Baba Ijebu is also leaving no stone unturned to make sure that he looks his best at his event.  One thing you cannot take away or dispute about the revered Ijebu billionaire is the fact that he knows how to spend and enjoy his money. While he has disbursed money for the proper handling of the event, the stylish grandpa and founder of the popular Baba Ijebu Lotto surely knows how to pamper himself, having worked so hard for the fruits of his labour.

For his new title, the new Odole Oodua has taken delivery of 2019 Rolls Royce Phantom, which cost over 169 million naira. It was a special gift for himself as he gets one of the biggest titles in Ile Ife. Don‘t forget that Chief Kesington always uses the plate number “KAA”,  which is an acronym of his initials. The white Rolls Royce will take him to Ile Ife, but he won’t enter the venue of the event driving in a car, as the Balogun Dododawa will ride a white horse chariot into the palace. It is a signature to show that he is a Balogun of Ijebu-Iperu land.

The event will witness an array of many Nigerian billionaires it will also have over 10 serving governors and over 200 Obas in attendance. They are all going to be Chief Kesington Adebutu’s guests for the 2 days. So also are many House of Representatives and Senate members who are going to be there to honour one of Adebutus sons‘, Hon Ladi Adebutu.

Dr Mrs Abiola Olorode, the Beere of the Adebutu‘s will lead Chief Adebutus children to the event. They are all coming out in their large numbers to show love to their parents, as they get their highly revered titles.

Who are those handling the event you may ask? it is Taiwo Bankole, the CEO of Strictly Evening, who is the twin sister of Nollywood screen diva, Kehinde Banjole, while the Decoration will be done by one of the best event decorators in South-West. The coolest macaque will be supplied by Cedarwood. They are the most patronised macaque owners in Nigeria.

Did you ask who is serving hot sumptuous meals?.  It is no other firm than Astoria Foods. They are the official food vendor of the Adebutus, while Bonix drinks; the biggest drink butler will serve chilled drinks to over 1000 V.I.P guests. K-Square will be in charge of Security.

Many don’t know that Odole is one of the biggest titles in Ile Ife. The Odole Oodua is a special office, which works closely with the Ooni in rallying the descendants of Oduduwa wherever they are in the world for unity, peace and progress of the race.” “The Odole Oodua, a position once occupied by the late Chief Obafemi Awolowo and subsequently by Chief G.O.K Ajayi is a highly revered chieftaincy position in Yorubaland pioneered by the great Oranmiyan, while he was still a prince of Ife,”

Chief Kesington Adebutu is the 3rd Ogun indigene to be installed Odole Oodua of Ife.