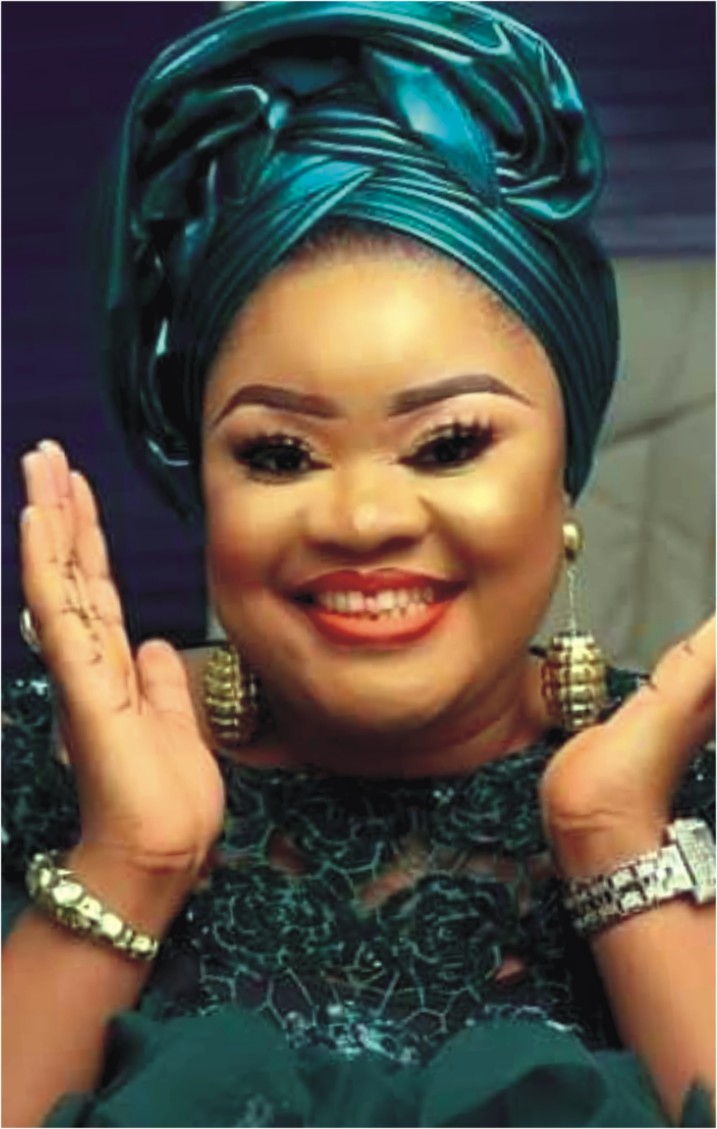 Angela Udofia is the Head Human Resources at Sweet Estate, one of the prominent and popular indigenous real estate companies in Ogun State. The company in the last five years has enjoyed massive turn around and also recorded multiple numbers of homeowners in Ogun and Oyo state. Although Angela started with the company as an office assistant and also doubled as the secretary and played significant roles during the start-up of Sweet Estate in 2016, but he was promoted to the post of Head of Human Resources in 2020 when the company moved to its permanent site. Angela is not just pretty, she has a figure to die for and apart from that she is good at what she does when it comes to real estate business. She is also one of the big babes rocking Ogun party scenes presently. A few weeks ago, the plump real estate big babe marked her birthday and gifted herself another luxury car. In this interview with BUNMI MUSTAPHA, she opens up on her journey from catering to real estates.

For the benefit of our readers who will be reading about you for the first time can I get to know you better?

My Name is Angela Udofia I am from Akwa Ibom but I live and work in Abeokuta.

How long have you been in Abeokuta?

I Have been In Abeokuta for fifteen years now. I had my OND and HND in Moshood Abiola Polytechnic, and my NYSC was at Ilaro that was at Yewa South Local Govt. and after my service, I came back to Abeokuta again in 2015. As at then I wasn’t working so I went into catering, I worked with the catering services outfit for a year and half before I started working with Sweet Estate in December 2016.

You studied mass communication in school, what really inspired or motivated you to go into catering?

It was pure passion for cooking and anything that comes into the stomach. I am always passionate about it and after my NYSC I tried applying for jobs, I applied at NTA and Rock City FM but they kept telling me they will call me, so even when I was in school I was able to bake cake for some people. I do doughnuts, chin chins and the likes before I started working and ever since I started working, I stopped doing all those things because I don’t have time any more.

So now, let’s talk about Sweet Estate, how did it all start?

Well, I saw a post on Facebook posted by the MD, he was in need of an office assistant. That fateful morning when I saw the post I was like an office assistant,  I was just in need of a job. I was ready to start with anything so I called the phone number, he was the one that picked up. I told him my name and everything and he fixed me for an interview the following week and after the interview, I was lucky I got the job and that was how I started

Did you start working as an office assistant?

I started working as an office assistant. In fact let’s just say when we started, it was just myself him and one other guy that normally takes people to the site. So he was working as the CEO who is not always available, I was working as an office assistant, secretary, PA, Messenger everything and anything you can think of.  I was like the face of the company then because we started in a small apartment at NUT hall in Kuto area of Abeokuta,  it was just like a 3 persons organization, in fact, even real estate was not doing well at that time, but I will just say perseverance and the grace of God kept me going because anything God is involved in you should know that thing will definitely come out well. It wasn’t really easy when we started because he started the business with 10,000 naira. In fact, I worked over a year without a salary. I just had that passion and I just felt instead of staying back at home doing nothing, this is actually better, something keeps telling me, something good will still come out of the job. I got attached to the job it takes all my time. I made use of all the people I had at my disposal just to make sure everything comes out well, so we thank God for the journey so far. We started with just one location and to God be the glory, now we have like 13 or 15 estates in Abeokuta and 7 at Ibadan. While we were at NUT we were chased away. At some point, we even wondered where are we going to start from, but we went back to Quarry road and to God be the glory this is our permanent head office and by February 14 we will be celebrating our first year anniversary of moving into our permanent site.

Well, I will say Angela is just a lovely person,  when people hear about Angela or when people see me probably because of my stature they feel like this woman will be so harsh but I am a very reserved person. I don’t really like making an announcement, even when I go to parties you won’t even see me spraying money. I rather go and meet the person doing the party and say, ok give me your account number let me transfer something to you. I don’t really like showing off, I don’t really like the loud life and all, I  am just a calm and reserved person that wakes up in the morning goes to work, mind my business, go to church on Sunday pray to God and do my things in my own little way.

Speaking of your stature you are still single?

How do you cope with male admirers, especially when sometimes they want to see the madam and they ask for something else other than real estate afterwards?

In fact, this question you asked me when I went for the interview that was the first thing my boss asked me, He was like, with this your stature are you sure we are not going to be having problems?  Because when we were at NUT even here at Quarry road when I just started, you just see people coming into say,  it is that madam we want to see. But the thing is it’s not everybody that comes to talk to you that you give attention to but when you doing your job, you don’t have talk to them in a harsh manner so that it won’t discourage them from even getting the property they seek. So it’s just the grace of God and wisdom, that is what has been keeping me so that it won’t look like one has been rude to them and it won’t also affect the business. Even on Facebook as well, when they talk to me on Facebook and I don’t give them attention,  they know when they talk about land or real estate, I will talk to them immediately so when they start talking to me I give them the office line,  but when they start saying something else, I tell them, please the only reason am on Facebook is for business,  if it’s anything aside from business am not interested. You are buying this land for yourself, you are not doing me a favour. I just want to help you so that you won’t get cheated so I don’t expect you to be asking for something else in return.

You celebrated your birthday a few weeks ago and a lot of people were expecting you to throw a party but you went on a low key, any reasons for that?

Without the boss there won’t be an HR, how will you describe your boss, because you have been working with him for many years now?

I will say my boss is a very accommodating person. He is loving, he has a listening ear and he is the kind of person that doesn’t really take things too hard. You won’t even know he is the CEO of the company, most people don’t even know him, they only hear his name on the radio because he is always on an advert. But when they come to him, he will say, go and meet Angela, anything she says so some people will be like let me come and see Angela. He is someone that believes and trusts the people who he has entrusted his business with. He is a lovely person, he is down to earth, he is not a proud person. Most people do not know he is the CEO of the company and I want to thank him for giving me the opportunity to serve under him. At least this has increased my profile because 5 or 6 years ago I wasn’t this successful. Even among my friends, the job has elevated me. Most people that don’t know me before especially the celebrities and people in government and all,  at least Sweet Estate has made me become  known to all of them and that is one thing I appreciate a lot

What would you say is your greatest achievement and regrets on the job?

Yes, there are challenges, but one thing am always happy about is I didn’t listen to what people were telling me then.  Friends and relations were like, why are you working where you are not getting paid, can’t you leave the job? I even had offers from other companies like N Power, when they came, I was given the employment. At that point, I didn’t want to leave the company because I knew they needed me then and so many other things like that. So many other job opportunities came and some will be like this person, what is she doing in Sweet Estate? Let her come to our own place and let’s see. I just felt like since am contented with where I am I don’t need to be jumping all over. There are challenges since we are dealing with land and anything that has to do with the land it takes a lot of patience. At times you have to take that selfish part out of you out of the way you relate with people. At times, especially most of the customers, most of them are not learned so you need to make sure you let them understand what they are actually going into and other little things like that. But to God be the glory because it is not easy to satisfy everyone,  but we always try our best. Out of 100 per cent, we can satisfy like 95 or 98, at least you can just give kudos to yourself.