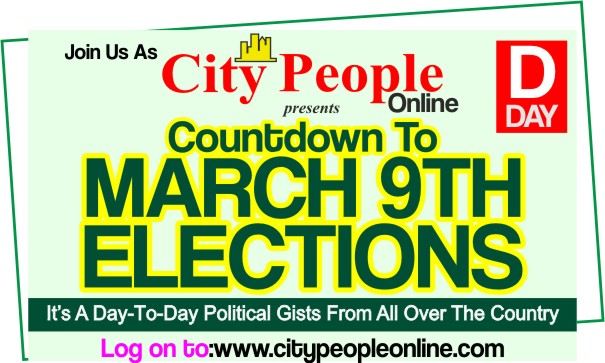 As Many Other OGUN Big Politicians Join Him

Over the last few days, many prominent Ogun politicians, despite their different political persuasions have decided to team up with Prince Dapo Abiodun, the Ogun APC governorship candidate. Many political watchers were shocked two days ago  when news broke that Otunba Gbenga Daniel, a respected chieftain of Ogun PDP, decided to support Dapo Abiodun, who is in APC.

Before OGD‘s decision, Engineer Deji Ashiru who contested for Ogun East Senatorial seat on the platform of ADC, dumped his party and GNI, who is the Ogun ADC governorship candidate and went on to work for Dapo Abiodun. “Dapo Abiodun head-hunted me for the role”, he explained. He and his supporters dumped the party to support Abiodun as political parties and candidates forged alliances ahead of today’s, March 9 governorship election.

It was the same thing Hon. Titi Oseni, the former Ogun Speaker did. She contested for Ogun Central Senatorial seat under ADC and lost to Gov. Amosun, despite allegations that she may have been the actual winner but was rigged out. After she lost, she also dumped her party and GNI and moved on to support Dapo Abiodun in APC. It was a similar thing Hon. Kayode Amusan did. He contested for Ogun Central Senatorial seat under the PDP and joined the APC shortlyafter Gov. Amosun was announced winner.

The 4 of them and many other political leaders have rallied round Dapo Abiodun to ensure he wins today’s election. Former Ogun State Commissioner, Waliu Taiwo, former Ado Odo Ota Chairman, Abayomi Tella and others have also defected to APC in support of Dapo Abiodun.

The paramount ruler of Ijebu Kingdom, His Imperial Majesty, Awujale Sikiru Adetona has also endorsed Prince Dapo Abiodun. He hasdirected all monarchs in Ijebuland to follow.

This development came few hours after the former Governor of Ogun State, Otunba Gbenga Daniel, threw his weight behind the APC governorship candidate. Similarly, monarchs across Remoland have also thrown their weight behind Prince Dapo Abiodun. The monarchs who were represented by the Alaperu, His Royal Majesty, Oba Adeleke Idowu Basibo, disclosed that all monarchs in the region have decided to follow the obvious choice of the people of Ogun State and most importantly taking into consideration, the capacity and credibility of Prince Dapo Abiodun amongst other Governorship candidates in the State.  The called on every son and daughter of Ogun State to make the right choice today, Saturday by voting for Prince Dapo Abiodun to ensure an immediate retracting of Ogun State to the path of development.

On why OGD chose to support Abiodun, City People gathered that Dapo Abiodun and OGD have been close for years and many of their  mutual friends lobbied OGD extensively, for Dapo‘s support.

An insider further revealed that OGD chose to support Dapo because of the internal wranglings in Ogun PDP since the court case disqualified Hon. Ladi Adebutu, one of the 2 gubernatorial candidates whilst the party leadership at the centre had expelled Sen. Buruji Kashamu. So, it was as if the PDP effectively has no gubernatorial candidate in Ogun State.

What City People found out is that OGD and Dapo Abiodun have a long standing relationship. We found out that Dapo actually contested with OGD in 2003, even though he came a distant second. He then collaborated with OGD after the party primaries in 2003. So for Dapo its like payback time.

We learnt that before the Wednesday judgement that favoured Kashamu, OGD had been busy supporting the ambition of Ladi, (the son of Chief Kessington Adebutu who OGD is close too) to become the next Governor of the state. The court verdict didn’t favour Ladi. So, OGD directed all the party structures, state wise to cast all their votes today, Saturday for Prince Dapo Abiodun, despite the current party differences.

A close associate of OGD explained that OGD sitting on the fence would have been suicidal and counter-productive to the overall progress, socio-economic and political advancement we have made so far with APCO project revealed a source. “Infact any indecision at this critical moment in Ogun, would amount to great plight of OGD‘s patrotic intentions and the yearnings of the state citizens.

The directives by H.E Atiku Abubakar to vote all PDP candidates in the coming election,is but with the exception of Ogun State,.because all supposed PDP candidates,most particularly, gubernatorial candidates Ladi and Buruji are not only in discord,disarray but also worked against Atiku for President project in the last election having adequately mobilized both.Today Ladi, the National PDP gubernatorial candidate has pitched his political tent with Gov Amosun‘s anointed APM candidate Akinlade while the court backed PDP gubernatorial candidate Kashamu is under expulsion by the national leadership of the PDP.Beyond the pressures from paramount kings,political leaders,dedicated members and supporters of APCO in the state,the decision to back Dapo Abiodun for Gov is a very tough one and a sacrifice needed to be made,at the local level,so as to rescue the state and make the local political structure a more formidable one” explained the source.

“It is important that we all appreciate the concerns of all those expressing their views on this issue. It may sound a bit confusing, but a little education and explanation will suffice. The whole problem of PDP started from Ogun State since 2008, and this snowballed into the national, creating the Maikarfi/Sheriff debacle. For instance, in the build up to the primaries, Ogun State was the only State Atiku could not visit because of the seemingly intractable problems. Even after the ticket, it became difficult to agree on coming to the same Ogun State. A little journey backwards: the candidate of the APC was in PDP and even contested the guber primaries with OGD in 2002/2003; ditto the outgoing governor Ibikunle Amosun who ran and was elected a Senator on the platform of PDP” explained the source.

“Suffice to also say that the crisis in Ogun State PDP was actually responsible for Chief Olusegun Obasanjo leaving the party, and not only him, but Chief Olagunsoye Oyinlola, Segun Oni and Chief Rashidi Adewolu Ladoja by extension”.

“The several attempts of the leadership of the party at the national level could not produce any results”.

“Meanwhile, the candidate supported by the current national leadership of the party lost out in a court case and he has also adopted candidate of the APM promoted by the current governor of the state, Ibikunle Amosun who is also seen as an alter ego to President Mohammadu Buhari. The State is left with 3 main options: APC, APM, and PDP. The candidate of the PDP is not supported by the national leadership of the party, so supporting him might be considered ‘anti-party’. Another option is a relatively unknown party flying a very popular candidate who is also from PDP, but frustrated out because of the same intractable problem within the party. He was actually the party’s candidate in 2015 in ADC.

The party here is the issue. Even Obj who is the Chief promoter of the party has his misgivings about the party after the presidential elections with its abysmal performance. They could not even assist our presidential aspirations for Waziri Atiku. That then leaves 2 options: APC and APM. Definitely a party being promoted by the current governor of Ogun State is way out of it; because he is one of the closest to PMB, and getting a successor will strengthen Buhari’s hold on South West politics, and losing will expose the internal contradictions within the APC itself and assist our court cases to challenge the results of the outrightly manipulated presidential elections. Either way the results turned out, it will serve the interest of Waziri Atiku Abubakar.

The source explained that OGD did not dissolve his political structure into APC. He is  just assisting the weaker to gain strength to support our collective overall interest. He remains solidly behind the Atiku mandate and will do all he can to strengthen the claim to reclaiming that sacred mandate and we are all in this together. No one will work and sacrifice as much as we all have and sit back idly to allow that to be stolen brazenly”.

Many don’t know that Dapo Abiodun has come a long way. He once contested for Senate years back. His decision to run for Senate then pitched Dapo Abiodun against other aspirants like the incumbent Senator Gbenga Kaka, and Bayo Onanuga, the MD/CEO of NAN who came out to run.

Many don’t know he has had an intimidating profile, from as far back as 1997 when as a distinguished member of the UNCP National Finance Committee he was outstanding.

He was the  First Individual to donate to the Sagamu Yoruba/Hausa Community after the ethnic clash. He supported the party (PDP) at all levels morally, particularly financially at all levels throughout the elections, Member Gemade Steering Committee.

Minor Narrates How Winners Chapel Pastor Raped Her To Court

Why Otunba MIKE ADENUGA Does Not Attend...