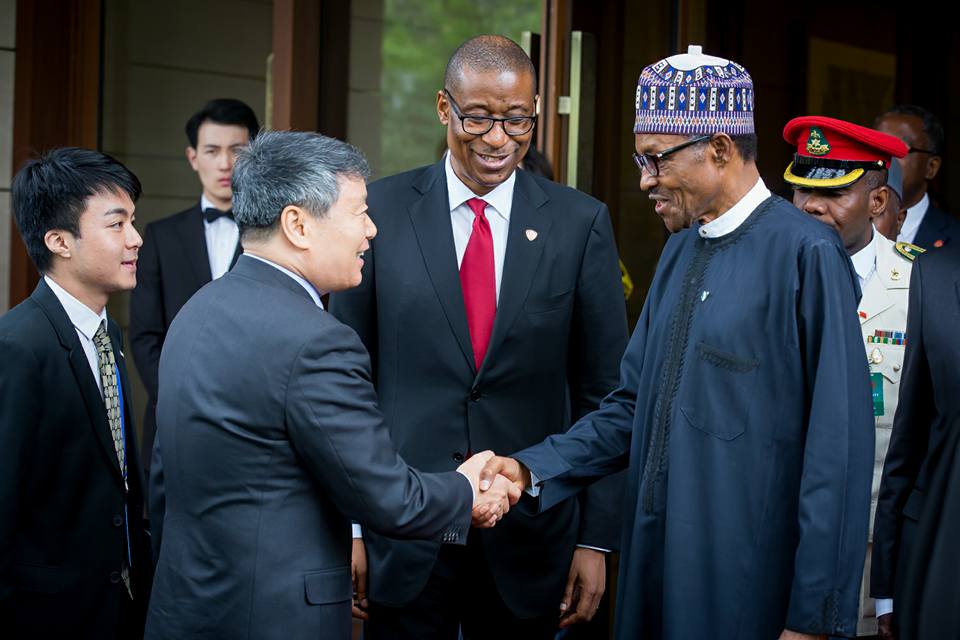 A lot of fabric traders in Isale Eko and Balogun areas of Lagos Island are appealing to the Chinese government to look into the arbitrary increase in Visa fees currently being charged by its embassy in Lagos. They alleged that, over the last 5 years or so, the Visa fees had been going up geometrically because of the role of some middlemen, who are into Visa racketeering.

It is not only the fabric merchants who are complaining, many other businessmen and women are also grumbling . City People has been inundated by several allegations from various business quarters accusing the Chinese embassy of charging charging exorbitant and illegal visa fees. These are people doing big and regular business with China, like the Fabric merchants, jewellers, shoe traders, etc. who take their designs to Chinese to produce and bring in goods and sell in wholesale. They are worst hit by the unfortunate development. The traders alleged that the Chinese come into Nigeria without any stress and transact huge business deals, while frustrating the efforts of gunuine business people, who are Nigerians, who have been transacting business with China for years.

The traders also claimed that the high cost of visa fees would eventually translate into high cost of products brought into the country for sale. City People  investigation confirmed that there is a big VISA racketeering going on at the Chinese Embassy right now. Years back, Single Entry was N100,000, 1 Year Entry was N150,000. But all have quadrupled. Multiple Entry is now between N500,000 to N700,000,  while single entry is between N250,000 and N350,000 now.

Ironically, right now, there is an influx of Chinese into Nigeria. They are coming in to compete with locals And over the years, they have frustrated some Nigerians out of business, because the Chinese have access to easy funds, at very low rate of interest. So, this has been a big challenge for local business people.

“I have been trading with China for the past 10 years”, explained a fabric merchant, “the Visa issue has never been this frustrating.” “Why is it so difficult to get a Chinese Visa? This is unfair. Why are we paying so much? an Isale Eko trader lamented.

City People gathered that part of the problem has to do with some staff of the Chinese embassy, who are doing deals with the  Nigerian staffers of the embassy. What they charge are illegal and illegitimate fees . What obtains there right now is that single entry visa is going for anything between N350,000 and N500,000 and it takes 2 months to process. As for 6 months Visa, that is non- existent. It is multiple visa that is possible. And as for  the 1 year Visa, it goes for between N850,000 and N1 million.

Right now, everybody who does business with China is complaining. So bad has the situation become that it has affected this year’s Canton Festival exhibition in China, where Chinese companies exhibit what they have to offer and business people from all over the world visit to transact business with them after taking a look  at what they have to offer. This year October, the slot for the chambers is up for grabs. Many traders wonder why the Chinese have scaled up Visa fees for Nigerians, while business people get Visa cheaply in Ghana, Togo and Benin Republic. It is, therefore not a surprise that many Nigerian business people now go there to access visas in those countries.

Nigeria and the People’s Republic of China established formal diplomatic relations on February 10, 1971.

China says its bilateral trade with Nigeria in 2017 stood at 12.3 billion dollars. Deputy Chinese Ambassador to Nigeria, Mr. Lin Jing, revealed recently that the trade figure recorded was from January to November 2017. Lin added that the figure also represented a 30 per cent increase compared to the same period of 2016. “The bilateral trade is a very important mechanism to boost our economic relationship. “We do not have the total trade volume for the whole year, but for the total volume from January to November, bilateral trade stood at 12.3 billion dollars.

“That represents more than 30 per cent increase, compared to the same period of 2016. We believe that by maintaining our normal trade volume, our overall economic relations and cooperation will be boosted and give impetus to our overall relationship.” The envoy says: “Nigeria is the biggest Chinese investment destination in Africa, the second largest export market and the third largest trading partner of China in Africa,” he said.

Lin reiterated the Chinese Government’s commitment to exhaust its efforts to promote development programmes in Nigeria. He said plans were underway to transfer some of China’s industrial capacity to Nigeria “There is also a concept initiated by my ambassador called Made In Nigeria with China. “I think this is a very good concept; there are many private investors in China, they have expertise, experience and surplus industrial capacity.

“They need to find the market. All these conditions we will make use of to see whether we can try something successful here.”

Not too long ago, Pres. Buhari decried the imbalance in Nigeria-China trade.  Buhari has called on the Nigerian and Chinese business communities to work harder to reduce the trade imbalance between the two countries which is currently in China’s favour. President Buhari, made this call at the opening of a Nigeria-China Business/Investment Forum in Beijing. He said trade and economic relations between both countries must be mutually-beneficial and conducted with reciprocated respect and trust.

“Although the Nigerian and Chinese business communities have recorded tremendous successes in bilateral trade, there is a large trade imbalance in favour of China, as Chinese exports represent some 80 per cent of the total bilateral trade volumes. This gap needs to be reduced. “Therefore, I would like to challenge the business communities in both countries to work together to reduce the trade imbalance. “You must also imbibe the spirit of having a mutually beneficial relationship in your business transactions. You must not see Nigeria as a consumer market alone, but as an investment destination where goods can be manufactured and consumed locally,” President Buhari told the gathering. The President said that his administration was committed to supporting investors who were ready to establish manufacturing and processing facilities in Nigeria.

Recently, Nigeria and China signed a currency-swap agreement worth $2.4 billion to boost commercial ties and reduce the need to use dollar in their bilateral trade. Governor of Central Bank of Nigeria (CBN), Mr. Godwin Emefiele, led CBN officials, while Governor of People’s Bank of China (PBoC), Dr. Yi Gang, led the Chinese team at the official signing ceremony in Beijing, China, a few months back.

“Among other benefits, this agreement will provide Naira liquidity to Chinese businesses and provide RMB liquidity to Nigerian businesses respectively, thereby improving the speed, convenience and volume of transactions between the two countries. It will also assist both countries in their foreign exchange reserves management, enhance financial stability and promote broader economic cooperation between the two countries.

“With the operationalisation of this agreement, it will be easier for most Nigerian manufacturers, especially small and medium-scale enterprises (SMEs) and cottage industries in manufacturing and export businesses to import raw materials, spare-parts and simple machinery to undertake their businesses by taking advantage of available RMB liquidity from Nigerian banks, without being exposed to the difficulties of seeking other scarce foreign currencies.

“The deal, which is purely an exchange of currencies, will also make it easier for Chinese manufacturers seeking to buy raw materials from Nigeria to obtain enough naira from banks in China to pay for their imports from Nigeria. “The deal will protect Nigerian business people from the harsh effects of third currency fluctuations. With this, Nigeria becomes the third African country to have such an agreement in place with China.

As it is, China is Nigeria’s second-biggest trading partner after the U.S., with volumes between the two totaling $9.2 billion in 2017, according to data compiled by Bloomberg. Nigeria runs a deficit, importing $7.6 billion of goods including textiles and machinery from China and exporting just $1.6 billion, mainly oil and gas.

SA To House of Reps Speaker, Dogara Resigns From APC