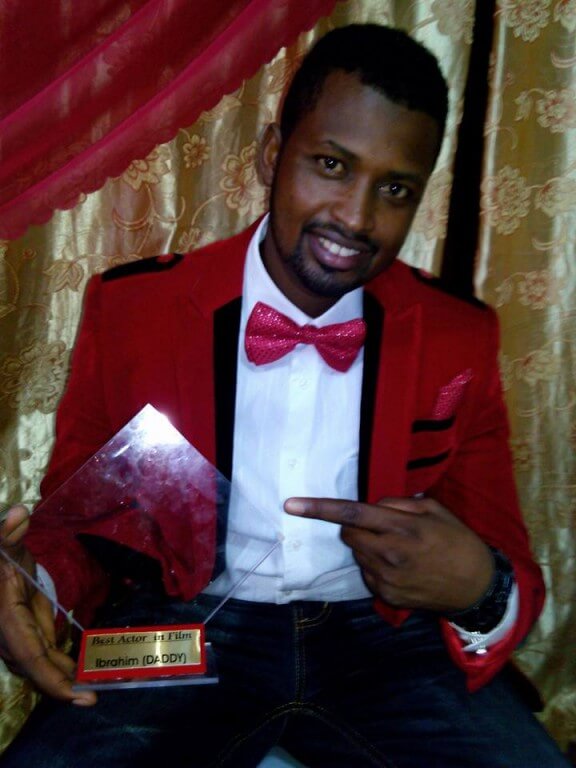 Soft spoken and good looking Ibrahim Daddy is fast becoming one of Kannywood’s biggest movie exports. The Hausa actor who began acting only seven years ago has done pretty well for himself, earning himself a reputation as one the finest talents to come out of that part of the country. He has featured in many of the block buster movies that come out from Kannywood and he has also began moves to make his cross over to the English movies, like his compatriot, Ali Nuhu did long time ago. And it is only a matter of time that he will achieve this. This is because Ibrahim’s face is popular up North as he features in many of the Hausa movies and he’s also a regular face in many of the widely followed television dramas. He is unmarried, and in his words, he is ‘single and searching.’ This has attracted hundreds of female fans and admirers to him, making him one of Kannywood’s hottest bachelors. At the City People’s Movie Awards held weeks ago, Ibrahim Daddy picked up two awards on the night, one was The Most Promising Actor, Kannywood and the other was Best Actor, TV Series. He spoke to City People’s WALE LAWAL about his exploits in Kannywood and why he is yet to find a wife at 27 years old.

You just won the award for The Most Promising Actor of Kannywood, tell us exactly how you feel at this moment?

I feel great. I feel very excited. And I give thanks to the Almighty who has made this possible for me, as well as my fans who have stood by me and supported me all these years.

I will say it’s been like seven years now. It’s been on and off actually because I’m in school studying. Sometimes, for a stretch of months, I’m off location because I have to study and prepare for my exams.

How difficult or easy was it for you when you first started acting over seven years ago?

The truth of the matter is that, in anything one wishes to do in life, you must encounter some difficulties, some good and bad moments. But the fantastic thing is that the result is starting to come out and I’m making a lot of progress. Like I just won my first award now, and I believe this is just the beginning of good things to come.

As an upcoming and promising actor, what does an award like this mean to you?

Well, it simply means that people are watching what I’m doing and they appreciate what I’m giving to them through my movies. But it also places on me a huge responsibility to work even harder and ensure that, by this time next year, I would’ve even made a bigger impact by achieving more than I’ve achieved so far.

Being a Muslim and a northerner, what support did you get from your parents when you first told them of your intention to become an actor? What was their reaction?

Actually, I didn’t have any problems telling my parents about my desire to go into acting because they are educated. We are all educated in my family. Inspite of my religion, they even supported me because they know I won’t let them down. They know I won’t disappoint them.

If you look back after seven years, how would you say the journey has been for you so far?

Yeah, the journey has been a great experience. I believe it’s been a success, especially when an actor from the north is able to come down to the east, to the west to work with other actors, it’s a great privilege. From there, you begin to aspire to cross over to other neighbouring countries, it’s really a big deal, a great achievement by all standards.

Who were the actors that inspired you before you became a professional actor?

For me, every fantastic actor is my role model. As long as you’re into entertainment and making impact, once you’re delivering your lines well and interpreting your roles perfectly, you are my role model. I have tremendous respect for every hard working entertainer out there.

You also just picked up the award for Best Actor, TV Series, Hausa. Were you expecting these awards in the first place?

Well, I can only say I was hopeful. Yes, I was expecting that I should be able to pick up at least an award today, but certainly I didn’t know I could win two awards in one night. It is just God, I’m so very grateful to God and to my fans.

Okay, but considering that you haven’t been that long in the industry, were you expecting you could make the kind of progress you have made within such a short while?

Actually, once you know you’re doing a good job and you’re working hard, then you will expect that at some point you will make progress and your breakthrough will come. So, yes, I will say I was expecting that I will make the kind of progress that I am making now. As a person, every day of my life I always expect something good to come to me.

So, what should we expect from you in the next three years?

No, I’m not married yet, I’m still searching. I’m still hoping to find the right woman to make my wife.

I know that by virtue of your popularity in the north, you must definitely be one of the most eligible bachelors that the ladies are hoping to get married to, how do you deal with your female admirers?

You know that when God has taken you to a certain level in life, there will be a lot of distractions from women, from everywhere. But at that very critical time, you need to be focused. That is the time you need to concentrate on your career the most. That is also the time you need to be careful so that you don’t make the wrong choice of partner otherwise you might end up with somebody who is loving you for the wrong reasons. One has to be really careful and you need to take your time before you can select the best woman that’s right for you.

One last word to your fans.

Yeah, I want to tell them that I love them and I’m proud of them. And I promise them that, no matter what, I will never let them down.

Life As One Of KANNYWOOD’s Hottest Bachelors – IBRAHIM DADDY Opens Up was last modified: November 7th, 2017 by Wale Lawal