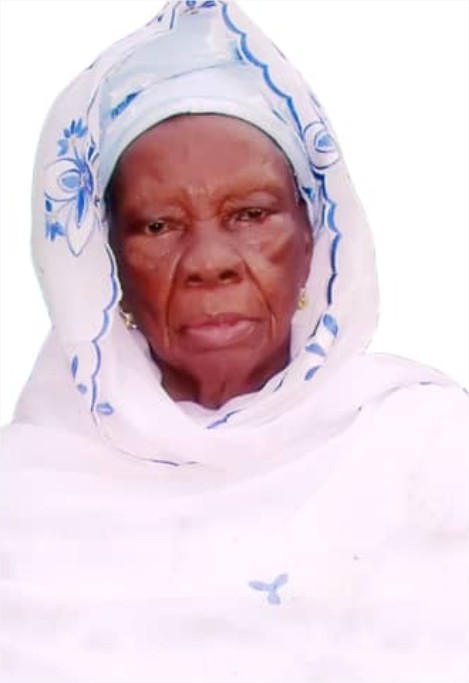 Gbenga Aroyewun is a big name in the media. The Ijebu-Ode based journalist/Publisher who publishes OBANTA Newsday (since 1998) is set to bury his mum Chief (Mrs.) Olaide Afusat Aroyewun who died a few days ago. She was born on February 13, 1923 and she passed on 17th October, 2020. Chief Mrs. Afusat Olaide Aroyewun (nee Rabiu Majagbon) came to this world in 1920s when silver coins (fadaka was changed to brass). It was the time Major Grand Ford became District Officer and Awujale Adenugba Folagbade was installed in 1924 a year after her birth. So she has witnessed the reign of four Awujales.

She was the first daughter of Alhaji Rabiu Banjo Majagbin (Rabiu Ita-Osu), a highly esteemed very wealthy man of God in his life. Her father, a lover of Western and Quaranic education endured she had both. In fact, it was on record that among her father’s peers. He was said to be the only one that considered Education of Women Important and ensured his children and relatives all embraced education.

She was born at Ikangba quarter, Abasi Street, Ita-Osi on 13th February, 1923. Her mother was Madam Munirat Banjo (Mama Ojofa) who hailed from Dawodu family at Ikangba quarters. She attended Kindergarten Class (Nursery & Primary School) in 1929 under the control of C.M.S. Missionaries’ sent from London at Adebowale’s House (back of Ijebu-Ode Central Mosque). While the late Mrs. Lawal (nee Odunuga Balogun) was one of her classmates. From there, she moved over to Christ Church Primary School, Porogun, in 1932 where she completed Standard 6 with her mates like late Mrs. Osisanya, wife of the former Principal of Ijebu-Ode Grammar School and Mrs. Ogunwomojo (nee Banjo), Mrs. Mosuru (nee Oluyadi) who were her classmates. She was admitted to CMS Girls’ School, Igbeba in 1939 for Secondary Modern Education. Late Chief (Mrs.) Soyanwo was one of her teachers while Mrs. Baisat Onafuye (nee Doherty), late Mrs. Nimota Babayale (nee Kuku) and Mrs. Nimota Onanuga (nee Quadri) were classmates. From the modern school, she forged ahead by attending the Methodist Teacher Training College, Sagamu her classmates then was Mrs. Salisu (nee Balogun Adesoye’s daughter). She could not finished teachers training education because of the pressure mounted on her to get married in time. In their time, female education was perceived as unnecessary but the wealthy Ijebu’s like her father were willing to educate their female children. She got married in 1942 to the late Alhaji S.O. Aroyewun, a civil servant with the Nigerian Railway Corporation. Mama had her first child in 1943. Mrs. Busola Fetuga a retired British trained Nurse now 77 years old. Mama ventured into textile business at Nnamdi Azikwe in 1940s. She was always at hand to give to people and donate to the Mosques. She showed gratitude to Allah with material at her disposal. Many would miss the philanthropic gesture of hers. Her ardent prayers that non of her 8 kids should die before her was heard by Allah.

Mama left for Ijebu-Ode later in 1965 to oversee her father’s Sawmill business hence why she is known as Iya Sawmill. At the sawmill business, at Ijebu-Ode, Mama was one of the first female plank sellers to use reckoning in calculating money, in which she taught many of the Ijebu plank seller. She also introduced a welfare package for the workers in the sawmill. Before her death in October 17, 2020 despite the ripe age of 97 when most of her peers are bedridden with eyes succumbing to cataract. She read the Nigerian dailies unaided on daily basis without using glasses. She also read Holy Qu’ran, Mama loved her children to no end. She demonstrated this love to all her children without exception she was however a great disciplinarian. Having recognised how valuable education is, she vowed that on one of her children would be without higher education. She spared no expense in seeing her children through school with the help of Allah, she singlehandedly trained all her children and grandchildren loved her. Mama was adored, loved and treasured by all her children. She truly was the greatest mum.

50 Stylish Women Who Attend City Of DAVID Parish In LAGOS