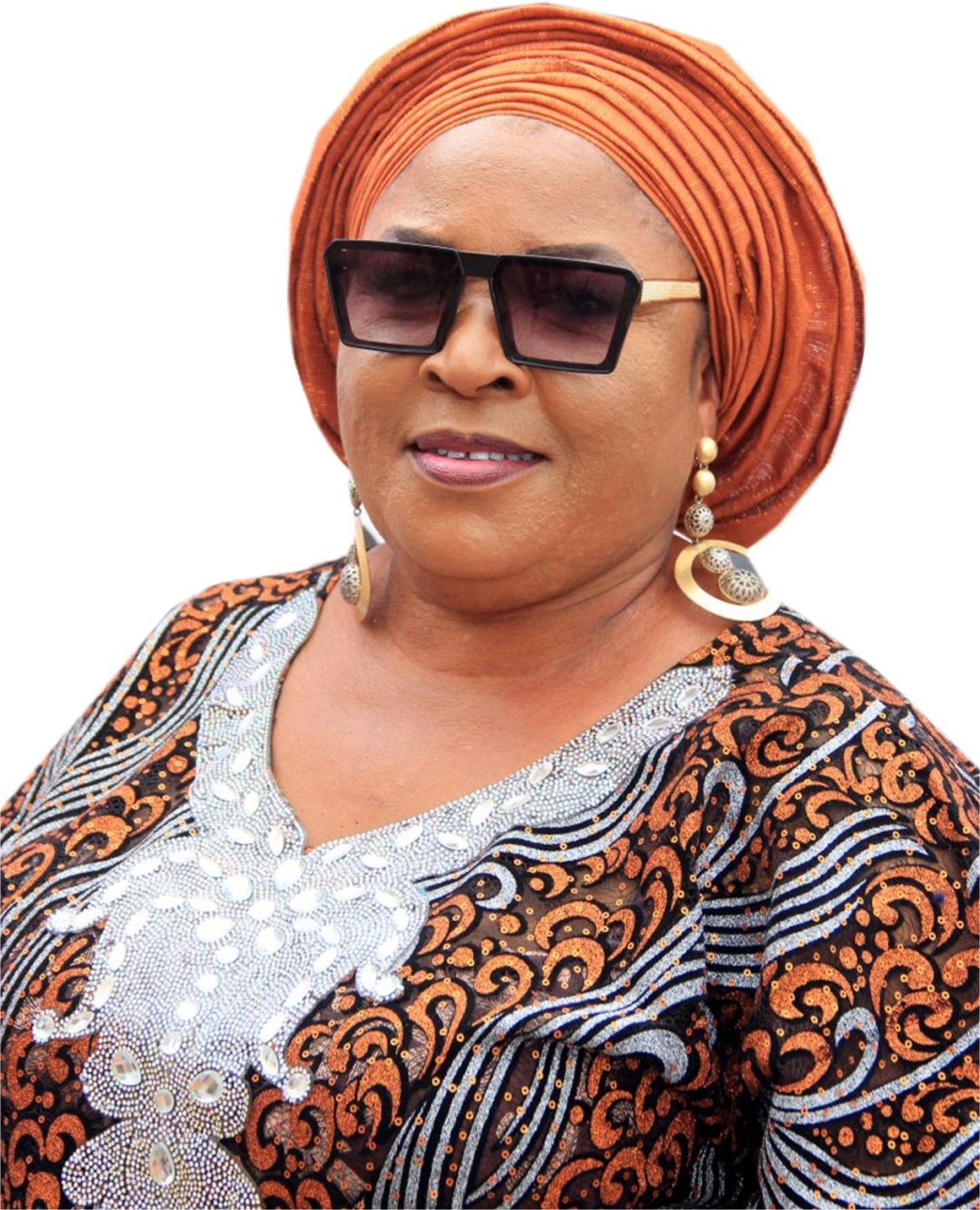 Details Of Her Interview With City People In IBADAN

Veteran actress, Orisabunmi dazzled everybody at Jogor Centre in Ibadan last Thursday, 19th December, 2019, at the 85th birthday of Chief Jimoh Aliu (Aworo). When she walked into the hall, all the guests were shocked. She and Baba Jimoh Aliu have been separated for about 22 years. So, many wondered if Orisabunmi and Baba Aworo still talk and relate. They do. We can tell you that for free. Though both have been separated for 22 years, they still talk if need be.

Chief Jimoh Aliu Aworo is a man who is well respected in the Yoruba movie world, till date. He is one of the few you can call Agba Osere (Master Actor), in the Yoruba movie industry, because he has been acting for over 4 decades, since he was young, and he has not retired despite the fact that he is 85.

Considering the number of years and his commitment towards the success of the industry that has become large today, considering his contributions to the lives of many Nollywood celebrities the turn out was huge. The entire JOGOR Centre was filled to the brim with actors and actresses, both young and veterans. They all came out en-masse to celebrate an Icon, Chief Jimoh Aliu Aworo.

Well-wishers, friends of the family and his 2 beautiful wives played host to many celebrity women at the event. But one woman who dazzled most was the celebrator’s ex-wife, Folake Aremu, fondly called Orisabunmi. Seeing her at the event performing on stage came as a surprise to many, because they have been separated for over 22 years.

Her presence on stage along with Ojo Arowosafe, the man nicknamed Fadeyi Oloro, performing a clip from the popular movie “Arelu” that brought the duo into the limelight several years ago, live on stage, thrilled the guests. Many were even wondering and asking before getting to see what is happening on stage, that, “Are you sure that is the real Orisabunmi?”After the great performance, she then moved from one table to another to greet all the dignitaries and guests on seat before she changed from her usual costume.

You will recall that Folake Aremu, Orisabunmi was a force to reckon with in the Yoruba movie industry in the 80’s with a popular flick titled “Arelu”,  a must watch Yoruba Film then among Yoruba film lovers. The film was packaged by Chief Jimoh Aliu (Aworo) before they went their separate ways 22 years ago. This beautiful and ageless actress was a teacher before Jimoh Aliu discovered her in Ilorin. In many of the plays and films, she has featured in, she takes up the role of a priestess with magical powers expressed in incantations and some other mysterious manifestations and this has endeared her to many viewers for many years.

To confirm what she’s been up to, how she’s been doing it; keeping her relevance over the years, and why she performed live on stage at her ex-husband’s 85th birthday, she spoke exclusively with City People Publisher, SEYE KEHINDE and Assistant Editor/Head of City People Tv. SUNDAY ADIGUN. Below are Excerpts.

How long have you been doing this?

It has really been a while, honestly, if I am not mistaking, it should be up to 41 to 42 years in the industry.

What is the secret of your ageless look?

Laughs!! The truth is that God is the secret behind my look. He has always been there for me all the time and I don’t have any reason to get worried about things happening around me. Also I as a person, I don’t do more than myself, it is when you start doing thing that are more than you, you start getting into trouble. I am contented with what I have. I don’t envy people or look down on anybody. I am satisfied and grateful for all God has blessed me with.

Once you remain where God has placed you, you won’t experience any form of disgrace or disappointment. But once you start doing more than yourself, then trouble is expected to knock on your door. Thank God for my life.

What is your assessment on your career over the years?

I really thank God because He’s been good to me. God loves me so much and I love Him too. If you know how to pray definitely your prayer will be answered.  For us to be here today, for us to be alive today it’s by the grace of God, and I’m happy. Ever since I started till now, over 40years is by the grace of God. It’s neither by power nor by might.

I’m from Ola in Kwara State, Igbona. I finished my Primary School there; I had my Secondary School at Eruku secondary commercial college. I thank God I have only SSCE. Then I joined Baba Aworo, and God has been so good. I also want to thank Baba Jimoh Aliu. Before, he was my husband but now he is my father, because it’s over 20 years that I left him. he was the one that gave us this platform. My stage name, Orisabunmi that I bear till date was given to me by Baba Jimoh Aliu, and I am grateful to God, that ever since I started bearing that name, it has never been associated with any form of scandal.God has really been faithful. And I will forever be grateful to him for all the grace and mercy upon my life. And that is why Ojo Arowosafe and I agreed to act live on stage to appreciate him, because he was the one that taught us, may God preserve him, and all his children.

While you were on stage, many people were looking at you asking that are you the one or not?

I’m the one, the popular Orisabunmi (Laughs).

How did you get the name?

I got my nickname ORISABUNMI from the movie we did in 1986. It’s titled “Arelu. It was that play that gave many of us our names, like Fadeyi Oloro.

You are used to acting a particular role in movies, why has it been difficult for others to act your role perfectly in movies?

Laughs!!! Ah, lots of people can still try it too. The truth of the matter is that, we are blessed differently from God Almighty. Moreover, it is what you have, that you can give. It is what you have learnt and known, that you can showcase. I pray people will learn and be able to interpret such roles, even more than I do, by the special grace of God.

I was a teacher in Ilorin, when I met Jimoh Aliu, on sighting me, he expressed his interest in me and invited me to their location, where they were shooting a movie. I took a role in the movie, and I did it so naturally, and this made it difficult for him to let me go and that was how my acting career started. I acted the role of Orisabunmi and that is the stage name people call me till date.

Did you go through extra training to learn about all the incantation and other things associated with the role you take in movies?

How do you manage stardom?

It has not been easy but it’s a must to associate with people, because without them we are nothing. It is all by the mercy of God. So it’s not possible for us not to relate with people well when they are greeting us. That is pride.

So how is acting now? Do you still go to location?

In fact, I just returned from a location. I came back because of this event and I’m still going back. And ever since I started I’ve been to many countries; London, Germany, Paris e.t.c.

So you don’t have any regret?

I don’t have any regrets. God has been faithful.

How did your relationship with Chief Jimoh Aliu start?

It’s a long story. We won’t leave here if I should start. I used to go to him for rehearsals from my place of work. One thing led to other and we got married, before we separated when God said we should. But he still remains my father till tomorrow. It has been destined that we won’t stay with each other for long.

What is the advice you have for upcoming movie stars in the industry?

My advice to them is that, they should be truthful in everything they do, and also to be patient. Once you have these two things in your life, there is nothing you can’t achieve in life. Above all be prayerful. It is very important to always pray to God, so He can intercede in everything.