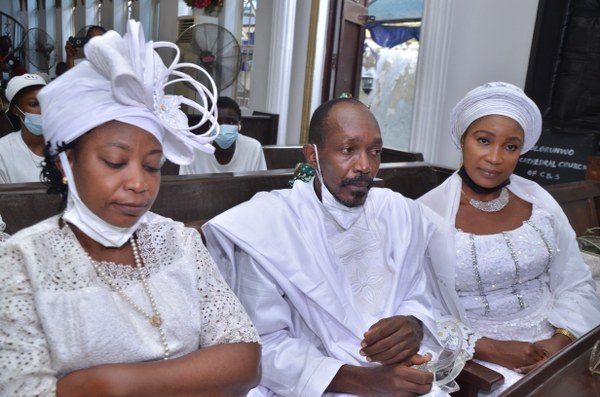 The Olorunwo Cathedral of C&S Gbagada, Lagos, a church where the late Primate Emmanuel Omolaja Olorunwo pastored for more than 50 years until he breathe his last was filled to the brim last Wednesday, September 15, 2021, as different people gathered to celebrate his exit into Glory.

Primate Olorunwo who lived 85 impactful years, was a force to reckon with in Christendom. He had 6 biological children who are well connected in the country but could as well be referred to as the father of many children because of his impact and influence on different people.

It was not a surprise that a lot of people left their jobs to make the service of songs ahead of the scheduled 4:00 pm. take-off time.

City People was there as well. Brands Editor, DAMILARE SALAMI 08155134152 and Photojournalist, Sunday Oyemade bring some of the juicy gists for your reading pleasure.

It Was An All-White Affair

In his lifetime, Baba Olorunwo was known to be a man of high reputation and dignity. He was also known for cleanliness. He was always in white. Little wonder his Service of songs was as beautiful as the parade of angels in heaven. It was an all-white affair. Virtually everyone in the auditorium was dressed in all-white outfits. It was beautiful indeed. From the podium down to the overflow, everywhere was sparkling.

It Was A Celebration, Not Mourning

Unlike at most Service of songs where most congregants mourn and weep over the deceased, Primate Olorunwo’s case was different. His children and the entire church publicly encouraged people to dance and celebrate not because Baba died at the ripe age of 85, but because he lived a fulfilled life and died empty. Every one that had met him had something to point at as a positive impact. Baba was a shepherd who would go out of his way to bring smile to the face of his members and even those for came for consultation.

In his lifetime, one thing Primate Emmanuel Omolaja Olorunwo never joked with was his children. He loved them a great deal. He was fond of describing them by their titles. All of them are damn good professionals. Some of them have in fact served in public offices, both at the state and national levels. They are Mrs Yewande Otunsanya, Mr Ilemobayo Olorunwo, Magistrate Oketola Sam Obaleye, MS Omotinuolawa Olorunwo, Mrs Temitope Animashaun and Barrister Omolayo Olorunwo. They were also dressed in white and took the front position inside the auditorium. Their joy knew no bounds seeing how a large crowd came to celebrate their father even in death. Primate Olorunwo’s grandchildren were spotted as well, dancing and praising God for a fulfilled life.

The Very Reverend Akinolu O. Olanrele of the Methodist Church Nigeria, Ikorodu Diocese according to reports, is one of the ministers of God in Lagos that had close ties with Baba Olorunwo. He was at the Service of songs and said the closing prayer and benediction. He had stood by the family since the Primate’s demise and his presence at the service of songs made a lot of statements.

Service of Songs or Artistes Night?

One would wonder if the event was truly a Service of songs or artistes night. The reason was because many gospel artistes came to pay their respect for Baba and even deemed it fit to perform. According to an headcount made by City People, there were more than 5 top gospel artistes lined up to minister to the congregation. Although the event was a 3-hour programme, all the artistes had an ample time to minister even though the congregation wanted more than what they delivered because of time constrains.

The night of music started with a delivery of some beautiful classical masterpieces by an orchestra group known as the Scales Musical Concept. They had three beautiful soul lifting rendition accompanied by violins and double-base. Their performance left many people emotional but the congregation was lifted again by one of Baba’s sons who reminded them that Baba is in a better place and shpuld be celebrated and not otherwise.

Shortly after the Orchestra performance, was a young lawyer and musician who goes by the name Osagie Obaimu. He delivered a highly spirited performance that got many people on their feet dancing. He afterwards revealed to City People that he works at the chambers of Barrister Omolayo Olorunwo, one of Baba’s children and that he’s had time with Baba and has been influenced and impacted by this great man of God, this was why he had to be at the event to pay his last respect by performing at his service of songs.

Dapson was another young and fast-rising musical act that set the event ablaze. He opened the floor with some of Baba’s most loved hymn songs. His performance was basically on hymns and spiritual songs and he did so well. He reminded many of how musically active Primate Olorunwo was.

Deborah Joseph Came All The Way From THE US,

Deborah Joseph is a performing gospel act who is based in the United States of America but had to come down to Nigeria for the Primate’s funeral out of respect and much love. She was one artiste that revealed the huge role Primate Olorunwa played in her career and affirmed that she wouldn’t be where she is today if not for Baba’s impact and influence.

Seun Aransiola and Ayan Jesu need little introduction. They both have carved a niche for themselves in the gospel music genre. Ayan Jesu performed first before Seun was called upon to round off the event. Trust the Ayan Jesu band to always deliver. They did with their unique brand of gospel music that only makes use of voices and traditional instruments like sekere, gangan, agbamole, Konga, etc. The congregation wanted more from these gentlemen but the time wasn’t sufficient for a longer performance.

Chief Francis Ipoola Olaniyan (CFI) is the Founder of Victory Group of Schools. He was the best friend of late Papa Olorunwo. This very elderly man appeared to be lonely at the event, despite the fact that he was there with his friend. He just sat all by himself watching how his friend was being celebrated in death. An inside source revealed to City People that he was Primate Olorunwo’s best friend. It was obvious that life would be very difficult without his friend in the picture but he has to move on.

Omotunde Adebowale David, popularly known as Lolo 1, is a Nollywood actress, and a radio presenter. She hosted the radio programme, ‘Oga Madam’ on Wazobia FM 94.1, till 2019 when she left and joined Lasgidi FM as the General Manager and an on-air personality.

She started her career as a legal practitioner after being called to the bar in 2000. She worked in the law department before dropping it for broadcasting in 2004. She is also known for acting, in Yoruba and English movies. She featured in the popular series Jenifa’s Diary where she acted as Adaku. She became an On Air Personality for the first time when she joined Metro FM. She later joined Wazobia FM, then she left in 2019 after over 11 years with them.

She got the nickname Lolo 1 during a radio live show when she requested a nickname from people and she eventually picked Lolo.

She was one of the early comers at the event and was dressed in the colour code, white. She was spotted taking photographs with the Primate’s children. A further investigation revealed that she also had close ties with the Primate and Tinuola, one of his daughters.

Gbenga Otenuga is a Senior Consultant to Ibikunle Amosun, the former Governor of Ogun State, Nigeria and a member of the Executive Council of Ogun State. He was previously the Governor’s Chief of Staff. He was a former Commissioner for Youth and Sports and Commissioner for Urban and Physical Development in Ogun State. He is one of the spiritual sons of Primate Olorunwa. He was present at the service of songs to show respect to the departed and love for his family.

Raheem Adedoyin, 15 others elected to world IPI governing board