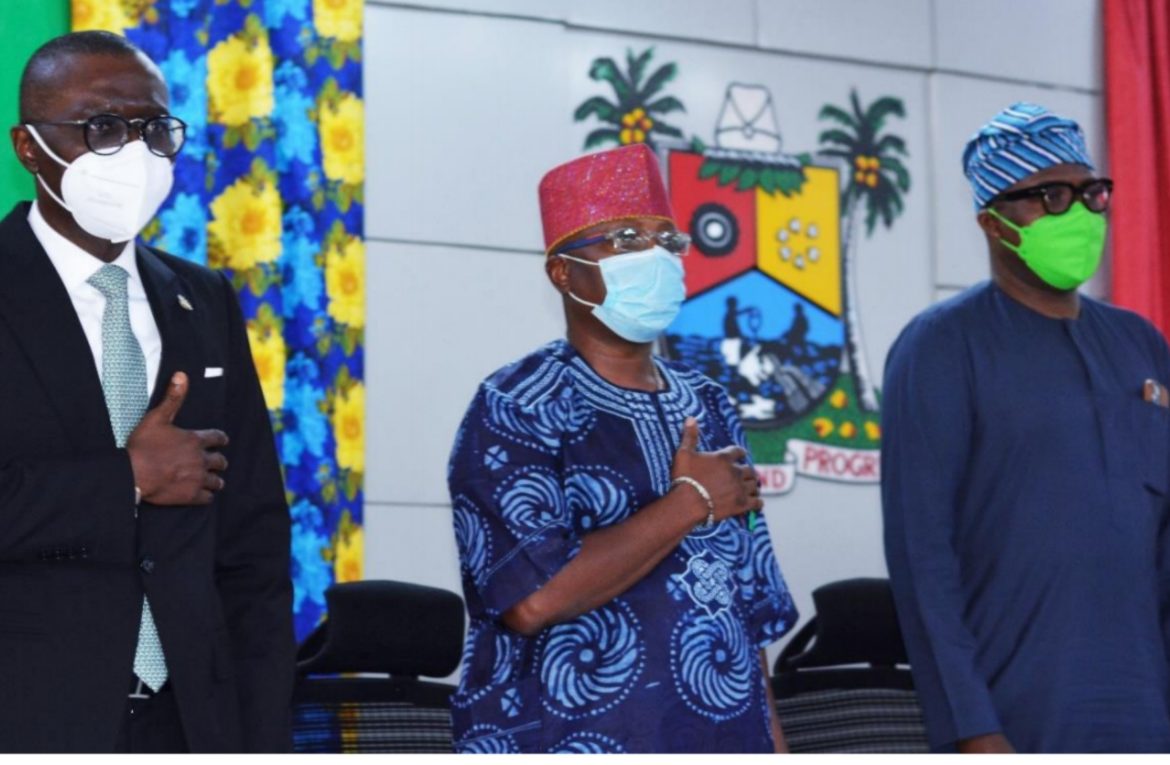 Lagos State Governor, Babajide Sanwo-Olu on Tuesday inaugurated the Lagos State Market Advisory Council charged with the responsibility of managing the affairs of markets in the state.

At the inauguration which took place at the State House, Ikeja, the governor said the council inauguration came at an auspicious time when all hands must be on deck to maximize the gains of a rapidly growing economy like Lagos.

He said as a progressive government, that is conscious of the huge responsibility that comes with building a megacity, the members had all been carefully appointed because they possessed the wherewithal to function optimally.

“Our markets remain a key driver for economic growth in Lagos State and it is our duty to ensure that we institute a template that is flexible and profitable enough for the economic growth that Lagos will witness in the years ahead,” he stated.

Sanwo-Olu urged the Market Advisory Council to do all that was required within the ambit of the law to effectively manage and control the markets in line with international best practices.“In carrying out your duties, you must consult widely in order to harmonize the interests of all stakeholders.

“In accordance with making Lagos a 21st century economy, which is one of the pillars of our administration’s T.H.E.M.E.S Agenda, I implore you to use your new office to seamlessly engage traders, our market men and women and all relevant stakeholders in order to acquaint them with the policies of this administration,” he added.Earlier, Commissioner for Local Government and Community Affairs, Dr. Wale Ahmed said at the inception of this administration, Sanwo-Olu indicated the direction of focus of his government, by announcing T.H.E.M.E.S. Agenda, capturing peculiar and specific sectors of the economy.

He explained that the agenda essentially entailed prioritising the sectors identified, in the administration’s scheme of governance.Ahmed stressed that in making Lagos State a 21st Century Economy, the governor knew that markets played a vital role in the economy of the state, hence his insistence on the inclusion of market stakeholders in ensuring Lagos State becomes a desirable mega city.

“Today, it is clear to the admiration of all that Mr Governor’s decision to inaugurate Lagos State Market Advisory Council is a carefully thought-out plan, embedded in the fundamental relevance of markets to the economy of Lagos State; and more importantly to the lives and daily living of the residents of this city.

“We must note that one of the ways to continuous economic growth and development in Lagos State, is to ensure that market management in a mega-city like ours is carefully structured with policies that will engender the Lagos of our dream; and this is especially pertinent because of the peculiar role that markets play in the development of the economy of any state,” he stated.

The commissioner noted that it was because of the hindsight and the foresight of the governor that the council was being inaugurated as a body that would contribute to efforts of this administration in achieving the T.H.E.M.E.S. Agenda, specifically, in Making Lagos State a 21st Century Economy.

Ahmed urged members of the council to collaboratively cooperate with this government, and to support her effort at moving the state to the next level, in line with the governor’s promise to the good people of Lagos State.

In attendance at the inauguration are the Deputy Governor, Dr Obafemi Hamzat; the Head of Service, Mr Hakeem Murhi-Okunola and the Chief of Staff, Mr Tayo Ayinde.