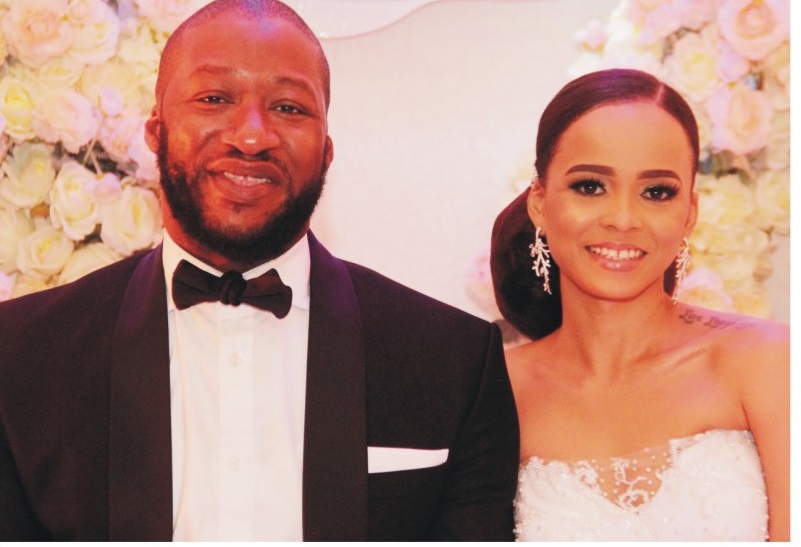 It was an array of prominent society women who gathered on Saturday, 14th of April, 2018, in Lagos when Soji the son of popular Ibadan Society woman, Chief (Mrs.) Tina Ogundoyin, the pretty wife of the late Chief Adesegun Ogundoyin’s signed the dotted lines with his pretty wife, Stephanie Eze, Stephanie is the pretty daughter of late Dr. Oyeabo Eze and Mrs. Rita Eze. The event paraded many A-List guests from all walks of life. They came to show love to the Queen of Sheba as Tina Ogundoyin is fondly called.

Tina Ogundoyin, who is one of the top female Oil gurus in Ibadan. She didn’t leave any stone unturned to impress and convince the Eze family that the Ogundoyins are capable of taking care of the new bride. The royal-blue event, which took place at the spacious The Event Place on Ligali Ayorinde Street, Victoria Island, paraded over 100 celebrity women and one of them was Mrs. Florence Ajimobi, the pretty wife of Oyo State Governor. She was one of the special guests, who came to honour the Ogundoyins and Ezes. She was in cream-gold exclusive iro and buba, while her silver-and-royal-blue diamond chain hung beautifully on her neck. She sat beside an APC Chieftain, Femi Pedro’s wife, who is one of the close family friends of the Ezes.

Another celebrity woman, who dazzled at the event was the groom’s mother, Tina Ogundoyin. She is known not to do things in small measure. She first dazzled in a hand-cut aso-oke matched with embellished burgundy wrapper and headgear. Many couldn’t take their eyes off her 18-carat gold, which she worn with it. Her flawless skin did justice to her second special attire bought from Lace and Fabrics in Ibadan.

Of course, that was the special “aso-ijo” that was picked for special friends of hers. She made heads turn in the fuchsia- pink-luxury lace from Hajia Bola Ologburo.
Folasade Fashad, the pretty fabric merchant at Gbagi, also attended. She came with her best friend, Alhaja Sherifat Olugbode, the Ceo of Gbode fabrics store, Balogun in Lagos. They also rocked the special aso-ijo with her friend, Tina Ogundoyin.

Have we told you that Hajia Bola Ologburo, the Ceo of Lace and Fabrics, is back in town? She came in 2 days earlier from her business trip to honour the Ogundoyins. Don’t forget that she was the one, who sold the special aso-ijo to Tina Ogundoyin’s friends. So, also was Yeyesewa Ayo Julius. The plus size Lagos society woman, who has been Mrs. Tina Ogundoyin’s friend of over 30 years also made it. She came with her clique of friends like Mrs Foluke Adeniyi Jones, the Ceo of Topshop. Topshop’s boss didn`t look 60 at all, as she looked petite in her beautiful skirt and blouse.

Words cannot describe how Pretty the bride’s mum, Mrs. Justina Eze looked at her daughter’s wedding. Those who thought Stephanie Ifeanyi is pretty couldn’t help, but stared at her mum with admiration. Her fair skin made her look like a Mulato. Many couldn’t help, but asked if she was not the one. Her daughter, Stephanie, inherited her complexion. She was a proud mother as she spotted the same attire with the groom’s mum, Tina Ogundoyin.

Do you know that the pretty wife of one of the top Nigeria Sports Betting Company CEo, Olaide Badero, also made the event. Of course, she was one of the guests, who made heads turn on the day. The 58 years old women made tongues wag with her 18-carat gold. You know she is not pedestrian in her choice of fashion. What of Mrs. Ronke Adenugba, the ebony beauty, who sells kids’ wears in Egbeda?

Let’s gist you about Erelu Tola Solomon-Osifeso’s look on the day. The woman surely knows how to make heads turn at any event. She did that which she knows how to do best at 3.45pm. She changed the tone of the party with her best friend, Mrs. Vicky Hastrup, the CEO of ENL Consortium. Their jewellery did the talking as they walked with beautiful smiles on their faces. Erelu chatted away with Alhaja Jadesola Qudus, the popular Ibadan shoe merchant. So, also is Mrs. Taofikat, that pretty woman, who runs a popular Hotel in Ibadan.