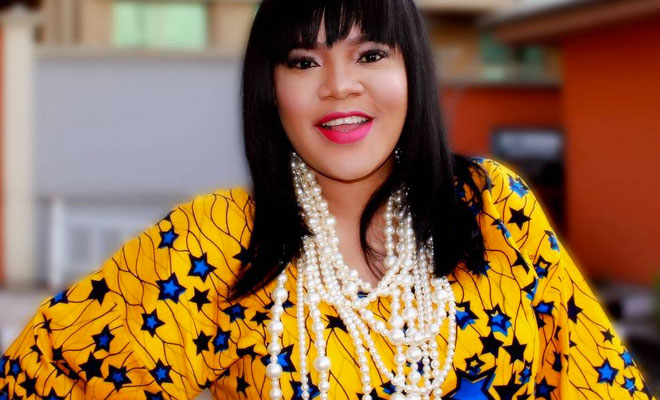 •Details Of How Both Have Been Stepping Out

Controversial Yoruba actress, Toyin Aimakhu is into love again. She is currently enjoying her life with a handsome Yoruba  actor, Kola Ajeyemi who hit her with his Cupid’s arrow about 6 months ago.

Recall that when City People published her new romance with this her fellow actor, also called  Kola Awilo, and her plans to possibly remarry, she went out in rage, cursing City People, alleging that what was published was  false. She immediately issued a Press Release to abuse City People.

In it her management said,  Toyin has been busy working on her career as an actress and her other businesses.”It has come to my attention, reports from some quarters saying that I am about to get married to a fellow actor. This assertion, insinuation, and report (sic) false and fallacious.

I have respect for actors, but I am not about to get married to anyone who is an actor. I have been busy with my work as an actress, working tirelessly on my TV, my lipstick launch and other businesses’’.

“The only relationship I have with any man in the industry is purely professional and it is high time we stop (sic)  insinuating and spreading false rumours when we see two colleagues of opposite sex working together. That is what the job entails and I expect that people should be smarter than this. If and when I am ready to walk down the aisle, you will not be hearing it from the rumour mongers, gossip magazine that are (sic) no longer in the city and people hell-bent on cooking up imaginative stories about me.

You will be hearing it from me directly. I reiterate that I am not about to get married to ANY fellow actor.”

Not only that. She sent text messages to the Publisher, threatening to take him to court over the story. But since then, both Kola and Toyin have been sighted at so many events in Lagos and even Dubai together. So many Blogs and Websites have published their stories and photos having great fun together.

So who is lying now? That is the big question. To further confirm our story, 3 months after she denied the romance, she has been alleged to have had a secret Wedding introduction and 6 months after, in a viral video, she stepped out with her lover, Kola Ajeyemi at an event in Lagos. The video which is a toyintitan Tv Video clip was uploaded and both of them were seen hand-in-hand, leaving an event. Kola was seen acting like an intending groom, ready to walk down the aisle with Toyin, and he was seen cuddling her to where a car was parked. He gently opened the door for her to board the car. What took place generated reactions from different quarters  as it was asserted that the two were not on set.

Recall, we reported that Toyin and Kola had been stepping out at events, but they do so stylishly to keep their romance off public glare. It was also reported by this medium that they usually get to events at the same time, but enter the event venue at different times according to a close source. Toyin’s many escapades with Kola Ajeyemi has been widely reported, but she keeps denying all.

Toyin’s love affair with Kola started months back after dumping former lover, Barrister Olugbenga Olujimi, over lack of trust. The new man in her life is one of her colleagues, Abeokuta-based, Kolawole Ajeyemi who was once married. The actor, it was learnt, got married years ago. According to those in the know, even though he has been in the industry for long, he has never picked interest in Toyin until the actress made it big in the movie business. He’s been telling everyone who cares to know that Toyin is his world. Their secret wedding introduction, we learnt, was held in Ibadan in February and feelers have it that the Nollywood couple will be getting married any time from now.

Toyin and Kola’s romance was said to have taken another turn when they both stormed Dubai and many tagged it their Honeymoon Vacation, which was just a few days after they had their introduction in Ibadan. They were seen in Dubai rocking same short knickers and posing for camera  with it. Recently, their postings have been about love and dishing out side talks. They were also seen flaunting rings during their vacation in Dubai. Kola Ajeyemi, who has been trying to raise his status to match Toyin’s big personality has been seen lately acting maturely and raising his style of  dressing spotting an array of his fashion label, Kola Ajeyemi Clothings.

It was also observed that there was a period Kola was doing a live video and Toyin Aimakhu joined. Immediately one of the social blogs, Gistlovers joined the live video chat, Toyin commented that Kola should stop the video that some “Gbeborun” in her language, have joined the Live Chat. Gistlovers, inturn took to the comment page to ask “why actresses are running away from her, that she is only doing her job”. Obviously, Toyin has many things to hide from the public. Toyin Aimakhu has never had it so good with love or even marriage because she keeps falling in and out of love within a short space of time. Her unpleasant experiences with men and love made her change her name to Toyin Abraham.

Explaining the decision, the actress who is no stranger to scandals, said, “It is a family decision and I will like to be officially addressed as Toyin Abraham henceforth”. In addition, she now goes by the name Toyin Abraham on all her social media handles. Although, the actress declined speaking further about what engendered the move, industry sources said the rebranding was a result of the unpleasant occurrences in her life and career in 2016.“Of all issues linked to her name in 2016, the shame of being associated with Seun Egbegbe still stands out like a sore-thumb.

Shortly before her messy romance liaison with Egbegbe which made headlines, the actress was embroiled in a messy separation scandal with her husband, Adeniyi Johnson. The union, which was contracted on July 3, 2013, crashed like a badly arranged cards in August 2015.

In no time, Egbegbe and Toyin became a hot item almost immediately after the crash and Egbegbe confirmed to have dated Toyin. In another development, the CEO of Ebony Films Production Nigeria Limited told Pulse Entertainment Magazine,”First, I never snatched Toyin Aimakhu from anybody. Toyin and I have not just known each other. We have been dating ever before she knew her husband. That was about 15 years ago. Even before her husband started acting. And recently, when we now met again, she wasn’t with her husband anymore before we rekindled our romance.” Toyin Abraham and Johnson got married on Monday, July, 2013, at the Ikoyi Registry, Lagos. The actress “filed for divorce on the grounds of infidelity in August 2015,”

Few weeks after all the drama of fraud alleged against Seun Egbegbe, Toyin Aimakhu, seemed to have called it quit with the man. She began an affair shortly after separating from her actor husband, Adeniyi Johnson, and deleted all pictures of her and Seun on her Instagram page, including the one she posted to proclaim affection on one Valentine’s Day.

Her marriage to Niyi Johnson which had hit the rocks necessitated Niyi moving on with his life to be with another fellow actress, Seyi Edun. Her estranged husband called her out severally to sign their divorce letter all to no avail until when she started her affair with Kola Ajeyemi that she responded to the divorce report. Adeniyi had on one weekday shared a post on social media, accusing Toyin of refusing to sign the divorce papers. He wrote: “We were to sign divorce papers on November 1st, you didn’t come. The case was postponed to January 10th, only for your manager, Sam, to call me that you wanted to discontinue the case in Shagamu and restart it in Ibadan. Madam, why? Till date, I did no interview, except the one on Rubbin Minds, and yet tolerated all the names you called me. Why not let me go after three years? Why are you shifting the case, so that we start all over again?

“No letter from the court about the discontinuation of the case, even your lawyer isn’t aware you are taking such a step. Na manager dey call us.“I admit to all the names and accusations. Toyin, can you please let me go? The delay tactic is tiring. I see my quietness being taken for granted and it’s making people assume, I’m the bad egg.” In response, Toyin took to her Instagram page to warn her ex-husband against sharing details of their divorce process on social media.

She wrote through her publicist, “Dear Niyi Johnson, I’m forced to respond to you here because you mentioned my name, so I will be returning the favour. If you desperately want a divorce, you should have filed one (a Suit) not Toyin; perhaps the over 1m naira cost deterred you. Toyin chose to bear the cost, pay her lawyer the fee and has taken the case to a considerable point. “This unnecessary call for attention and social media shenanigans are unnecessary. She has shown more commitment to the divorce proceedings than you. “In more than three years of separation, you just filed a “cross petition” last month while she has been at it in the court for over a year. She has “allowed you go” a long time and we all can see what that has done to her life and career.“