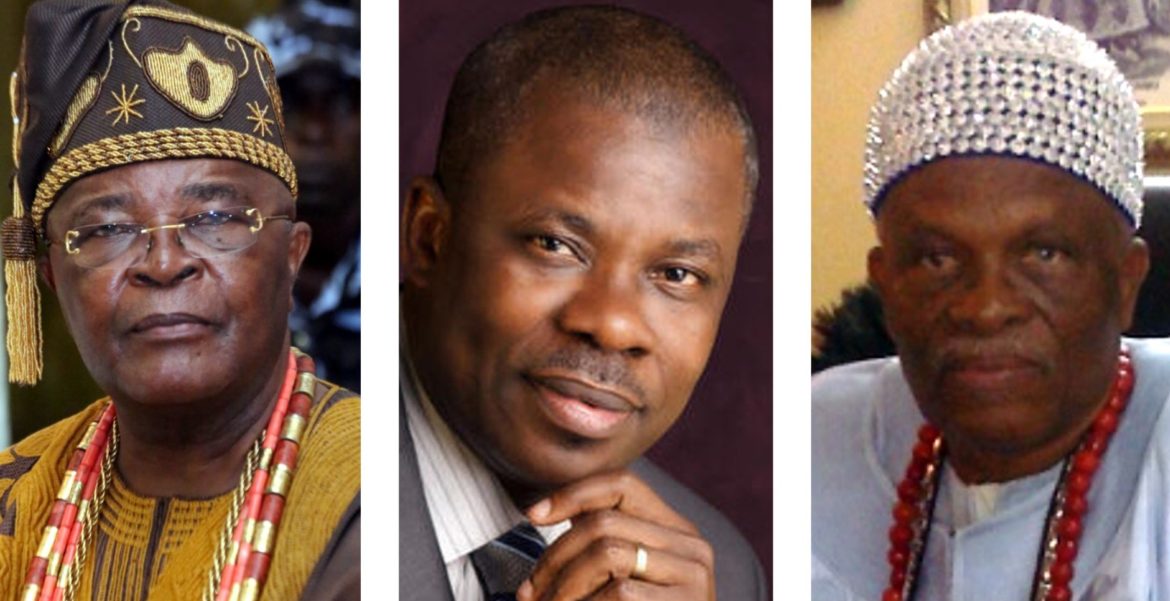 Two weeks to the expiration of the Ibikunle Amosun-led administration in Ogun State, the Commissioner for Local Government and Chieftaincy Affairs, Jide Ojuko, has resigned, stating kingship controversy in Aworiland as the reason.

Ojuko resigned on Wednesday, in a letter addressed to Governor Amosun through the office of the Secretary to the State Government, Taiwo Adeoluwa. Ojuko, who hails from Aworiland in Ota, disclosed this in his resignation letter. He said his conscience pricked him over the recent development in Aworiland in Ota, Ado-Odo /Ota Local Government Area of the state in relation to the installation of traditional rulers.  The crises started over an alleged plan by some influential people to illegally install kings in Aworiland towns in the domain of the Olota of Ota, Oba Abdulkabir Obalanlege.

Meanwhile, Olota-in-Council has vowed to resist any attempt by the Alake of Egbaland, Oba Adedotun Gbadebo and the Olowu of Owu Kingdom, Oba Adegboyega Dosunmu, to install monarchs and village heads in some Awori towns. The council also urged the two monarchs to shelve their plans or face stiff resistance from the Awori people. Olota-in-Council made up of traditional chiefs in the Palace of Olota, spoke last week Wednesday during a press conference in Abeokuta, Ogun State.

The Seriki of Ota, Olanrewaju Bashorun, claimed that intelligence at their disposal indicated that some persons who were not Ota indigenes, but being backed by both the Alake and Olowu, have been pencilled down to be installed as monarchs before the end of May. He said the scheme to install new monarchs and baales whose ancestors have no biological, historical and circumstantial link with the Aworis in Aworiland, would only cause disaffection and lead to chaos in Ota and its environs.

Bashorun, who mentioned Sango-Ota, Atan-Ota, Ijoko-Ota, Abule Lemomu, Oke-Ore and Adekoyeni as towns where the new monarchs are to be installed, declared that any attempt to carry out installation of traditional rulers in the areas without the consent of Olota of Ota, Oba Abdul-Kabir Obalanlege, would be resisted with all legitimate means. He said it was a historical fact that the Olota is the only prescribed traditional authority over all land, towns and villages with the suffix ‘Ota’, noting that activities of Alake and Olowu were tantamount to tampering with the consenting power of Olota. The Seriki of Ota, who pointed out that Aworiland had endured enough marginalisation in Ogun State, declared that Awori people will not allow any further subjugation.

“We have reliably gathered that against conscience, common sense and justice that some new obas, whose ancestors were not biologically, historically and circumstantially linked with the Aworis or had any affiliation with the kingship institution, would be installed before the end of May. Any such action or endeavour without the consent of Olota of Ota is an exercise in futility and would be resisted with every legitimate means available to us.

“It is an established historical fact that the Olota is the prescribed traditional authority over all land, towns and villages with the suffix Ota, including Sango-Ota, Atan-Ota and all the others. It, therefore, amounts to the denigration of that sacred institution that has endured for over 500 years without recourse to the traditional ruler. “The first Olota was installed in 1621. It is sad that the already marginalised Awori people’s will is being tested this way. We cannot fold our hands to any further subjugation,” Bashorun said. He, however, urged Governor Ibikunle Amosun to convene a security council meeting to nip in the bud the activities of “merchants of discord” in Awori communities and prevent illegal installations from taking place. This development led to the resignation of Commissioner for Local Government and Chieftaincy Affairs, Jide Ojuko, has resigned, stating kingship controversy in Aworiland as the reason.

Ojuko resigned last week Wednesday, in a letter addressed to Governor Amosun through the office of the Secretary to the State Government, Taiwo Adeoluwa.

Ojuko, who hails from Aworiland in Ota, disclosed this in his resignation letter. The letter read in part, “It pained me from the bottom of my heart to give notice of my resignation to a boss I love so much

By my appointment, I represent my people from Awori stock, my local government and the entire state. After service, I will have no choice but to go back home and settle down with my family and my people with total peace of mind. “Recent events are making me believe that this plan may not be feasible if I have to continue serving in my capacity as the honourable commissioner for local government and chieftaincy affairs. The ultimate, therefore, is that I shall become an outcast among my people. At my age, this is avoidable.

“My background as a civil and public servant  is to be obedient and loyal to my boss, but your recent directive on the issue of Obaship in some areas in Ota State constituency runs against my conscience, the wish and yearnings of my people that I represent.” Earlier, the Olota in Council had issued a press release in Abeokuta, the state capital, denouncing what it termed as an attempt to “distort the culture and breach the tradition of the people by the state government.” Recall that the  Olota Of Ota, HRM Oba (Prof.) Adeyemi Abdulkabir Obalanlege to installed Awori Oba in Oke-Ata, Baale in Lafenwa, Aro, and two other Awori settlements in Abeokuta.

In a chat with one of the prominent Chiefs in Ota,  it was  gathered then  that Olota of Ota, Oba (Prof.) Adeyemi Obalanlege will install Oba and Baales in five Awori settlements in the present day Abeokuta, Ogun State. Oba (Prof.) Obalanlege who will confer Chieftaincy titles on Chief Olusegun Tokis as Otunba of Ota and Hon. Ola Bello as Oluomo of Ota in September, last year.

According to the high chief, the “history made available to us by our fathers, Aworis settled in those places long before the Egbas came in 1842. Also, we were made to understand that no war has ever conquered the Aworis. So, the move by Olota is necessary as Aworis have positioned themselves and are now ready to reclaim the lands which were forcefully taken from them a long time ago”.

“If you visit those places that Kabiyesi is to install Awori Obas, you will, of course, agree with me that they are 100% Awori settlements. Their culture, tradition, orientation and their alignment have not shifted despite being forcefully and geographically categorized under Egbas. Aworis own those places, even the present day Ifo, Papa and the rest that Owu Obas have been crowned, they all belong to Aworis. Those moves are part of Olowu’s expansionist’s tendencies. We are not seeking extensions like the Owus and Akes, we just want to have what rightfully belonged to us”.

After all, there are two Obas in Ifo. The Olu of Ifo was made by Alake of Egbaland, Olowu of Owu made another Oba to rule in the same Ifo, despite the fact that Ifo is a core Awori settlement, they are both ruling in their domains without rancour. Though, one of them must be recognized by the government as an authentic Oba while the other remains illegal.