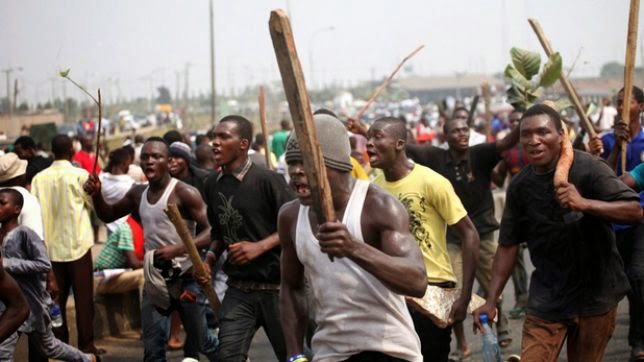 Violence broke out in Onicha-Olona, Aniocha North Local Government Area of Delta State after a policeman at a checkpoint along Issele-Uku/Issele-Mkpitime road is alleged to have killed a commercial motorcyclist also known as Okada for refusing to hand over N100 bribe.

Eyewitnesses’ account revealed that the bike man was flagged down by the policemen and was forced to give them N100 but he refused, which made one of the policemen to hit him with his gun butt on the head, resulting in his death.

Irked by the gory news, a horde of commercial motorcycles riders and irate youths in the locality besieged the Onicha-Olona Police Station and attempted to burn down the station but for the swift intervention of anti-riot squad drafted to quell the situation.

Meanwhile, the Delta State Police Command spokesman, DSP Andrew Aniamaka told Daily Trust on phone that the Police frowns at jungle justice and was miffed by the action of the okada riders and community youths.

According to the PPRO, no report of an incident involving an okada rider and a policeman resulting to death of any of the parties was reported at any of the Police stations PR brought before any authority and wondered why people should undermine the laws resort to lawlessness.

“Who is the okada man that was killed, who is the so-called policeman that killed him and where did this incident occur and where was it reported? You don’t just make trump up allegations and resort to jungle justice,” DSP Aniamaka queried.