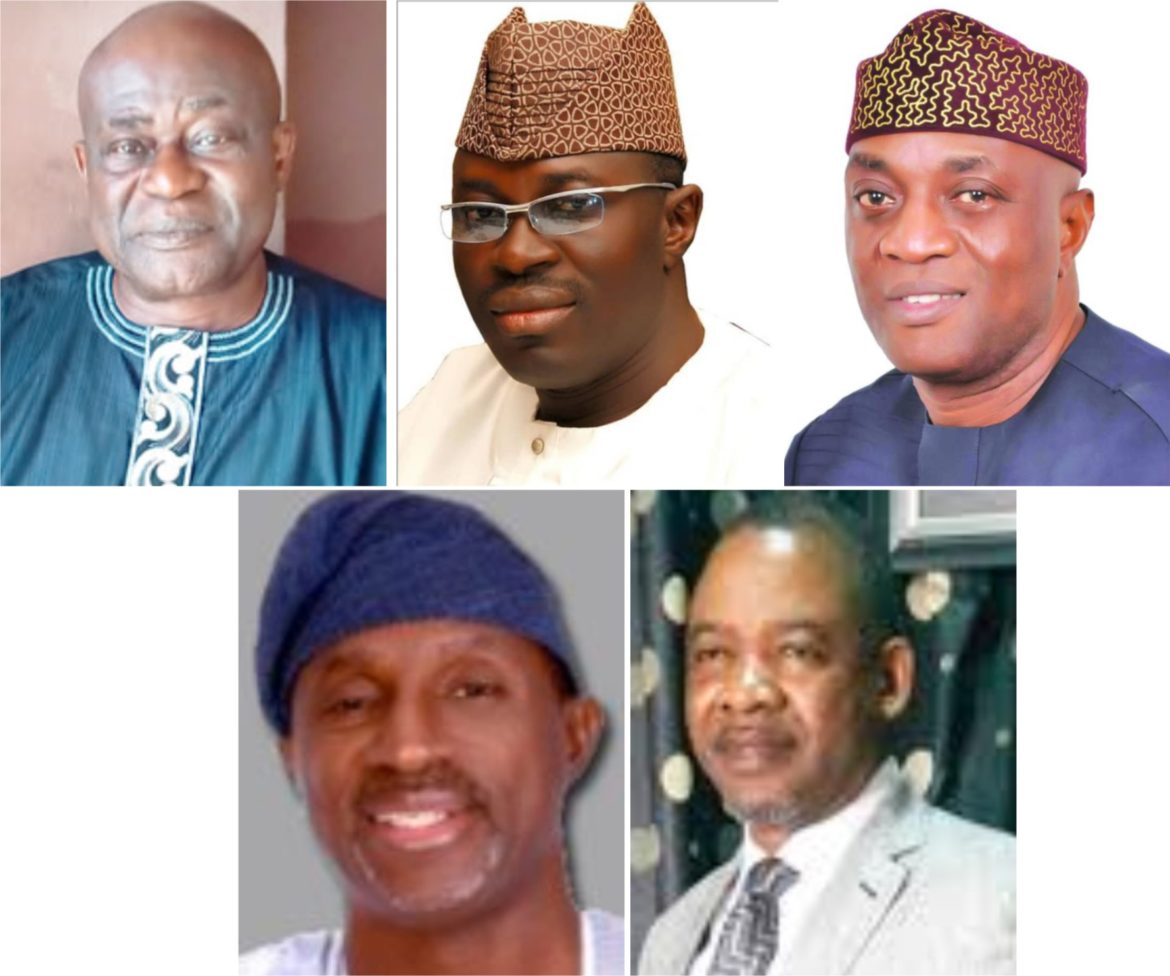 To say that the political scheming and intrigues presently going on across the prominent political parties in Oyo State is getting more interesting by the day as the 2019 general elections draw near, especially that of the numbered seat in the pace-setter state, is like stating an obvious.

There are alignments and re-alignments going on across these parties. The APC, PDP, ADC, Labour, Accord and several other political parties in the state are not ready to leave any stone unturned in making sure their various party becomes victorious in the coming elections. But apart from the external wars, most of these parties are fighting a more sensitive battle within, in producing candidates who will represent their parties in the elections either through primaries or consensus. And one of the political parties who are in this situation is the African Democratic Congress (ADC).

It is a known fact that the party becomes a force to reckon with when some prominent politicians recently joined it. Ex-Gov Rashidi Ladoja, Chief Michael Koleosho, the Unity Forum, Lamists, Senator Monsurat Sunmonu Group and many other groups from different political parties have since joined forces together in boosting the party’s image. While Ladoja group made up of Senator Femi Lanlehin, Akogun Sarafadeen Abiodun-Alli and co dumped the Peoples Democratic Party (PDP) to join ADC, a good number of the members are majorly the aggrieved personalities from APC; the likes of Chief Michael Koleosho, Professor Adeolu Akande, Hon. Dapo Lam-Adesina, Wasiu Olatunbosun, Monsurat Sunmonu, Yinus Akintunde and co all came from APC to join ADC.

And since emergence of this alliance the party has been adjudged the party to watch out for in the 2019 elections in Oyo State. When the alliance has recorded some success, however, it has also, as expected, enmeshed in some kind of controversies too. While the existing members of ADC are saying that they can’t fold their arms and allow the new comers dictates to them, the new entrants within themselves have since engaged in a serious supremacy battle over who gets what as per the exco and some other key positions in the party.

That exhaustively explained the crisis which engulfed the party after its August 28 Congress. The Unity Forum fumed at what they described as imposition by Ladoja and Chief Koleoso. They posited that the congress was illegal and threatened to quit the party if the issue was not resolved seventy two hours by National Working Committee of ADC. But as it is now, the party seems to have put the challenges behind and moved ahead and all issues have been resolved.

Not only that, the party has also adopted Direct Primaries option for its candidate to emerge. It is in line of this latest development within Oyo ADC that City People’s Correspondent, DARE ADENIRAN decided to look into the list of governoship aspirants who will have to proof their worth on the battle field at the party’s primary. Here are the 14 aspirants to slug it out among themselves in a governorship primary this week or next. Enjoy it.

He has an intimidating C.V in both academics and politics. Akogun Sarafadeen Abiodun –Alli is one of the brilliant men in Oyo State who have proven their mettles beyond reasonable doubt; he is no doubt successful in his private life and politics. The lawyer turned politician studied law from the University of Ibadan? in 1986. He attended the Nigerian Law School, Victoria Island in 1987. He served in Anambra State for his youth service and served at A.E Enumah & Associates (Barristers and Solicitors) in 1988.

He later joined R.A. Sarumi & Co., Solicitors Advocates & Notary Public, Ibadan between 1988 to 1991. Alli was a former local government chairman, former Secretary to the State Government (SSG), former Chief of Staff and a former Chairman of O’dua Group of Companies. Alli is well regarded in the conservative political class. He was running a mate to Ex-Gov. Alao-Akala in the 2015 elections. He commands enormous respect within the political class. He wants to be governor of Oyo State come 2019 and he is doing everything humanly possible to realize his dream under ADC. He is 55.

Femi Lanlehin, the senator who represented Oyo South in the Upper Chamber, is a popular politician in Oyo State,. He was born 8 July 1953. He was elected Senator for Oyo South in 2011 national elections, running on the Action Congress of Nigeria (ACN) platform. Lanlehin studied law at the University of Nigeria for his Bachelor of Law and later attended Nigerian Law School in Lagos. He was called to the Nigerian Bar in July 1977. He served as a senator under the All Progressives Congress (APC) before he later joined Accord Party and now ADC. He is one of the loyalists of the former Governor Rashidi Ladoja.

Comrade Nureni Adisa is one of the core loyalists of Ex-Gov. Ladoja and the former National Secretary of Accord Party. He has since reenergized his political structure to actualize his dream of ruling Oyo State come 2019, under ADC.

Aderemi Oseni, a chartered engineer and gubernatorial aspirant under the platform of the African Democratic Congress (ADC), is the CEO of Step Development Limited. He is from Ido Local Government area of the state. To show his seriousness, Engineer Aderemi Oseni has picked the party’s interest form and he is more than ready to contest in the governorship primaries.

Barrister Lowo Obisesan, the Principal Partner at Black & White Law firm is the former Commissioner for Environment and Habitat in Oyo State. Lowo Obisesan started active practice in Nigeria in 1996 and has succeeded in carving a niche for himself in his sector and on the business and political scenes in Nigeria. He has represented various clients and corporations in several complex and diverse legal disputes. He has an uncommon passion for litigation and this has seen him soar in various courts across the country.

He also has a strong foundation in corporate and commercial legal practice, and he has been instrumental to the re-structuring and advancement of several businesses and institutions in. He is now eyeing the position of the number one seat in the state under the platform of ADC. He was formerly of the Labour Party (LP) before he defected to his present party.

Yunus Akintunde is not new in Oyo State politics; he has been actively involved since the inception of the third republic in 1999. The Oyo-born politician started his political career and he was appointed commissioner, in Oyo State Civil Service Commission (between 1999 and 2003); Chairman, APC State Registration Committee for Osun State (January 2014); Chairman, APC State Congresses Committee for Kwara State (April 2014); member, APC House of Representatives (serving members) Aspirants screening committee (December 2014); and member, Executive Advisory Committee (EAC) for the re-election of Gov. Abiola Ajimobi (2014/2015).

The former Commissioner for Health under Ex-Gov Adebayo Alao-Akala, Kola Balogun has been described as one of the major contenders in ADC governorship primaries and the coming 2019 election.

A practicing engineer, Olaniyan is from Igboho in Oke Ogun area of the state. He is said to be a gentle and soft-spoken politician who recently retired from the Oyo State Civil Service as a Permanent Secretary. He is a former chieftain of the Accord Party before he decamped to APC. But ironically, Olaniyan is back in the same party (ADC) with his long time mentor and leader Chief Rashidi Ladoji. He was the former General Manager of Oyo State Road Maintenance Agency (OSTROMA), where he was said to have made some significant positive contributions.

The former Deputy Governor of Oyo State,Taofeek Arapaja has joined the long list of aspirants who want to take over from Governor Abiola Ajimobi come 2019. He has launched a strong campaign machinery to achieve this dream to rule Oyo State under African Democratic Congress (ADC). The former Nigerian Ambassador to Jordan sure has a very good track record in politics.

Mr. Dele Adigun is apparently one of Ladoja’s loyalists who have reconciled with the Osi Olubadan of Ibadan land and now in the same party with him. Remember that Dele Adigun served under Ladoja as Honorable Commissioner for Special Duties and also as S.S.G. He is a master strategist and grass root mobiliser. Having risen through ranks in the civil service of Oyo State, where he became a Permanent Secretary, before he ventured into politics.

It is no more new that Chief Bolaji Ayorinde (SAN), has joined Oyo guber race. He appears to be fully prepared for the task ahead and he has since engaged in wide consultations among those who matters in Oyo politics, especially within ADC, where he is seeking ticket to run for the number one position in the state come 2019.  The legal icon turned politician is a respected legal luminary from Ibadan, from the illustrious Ayorinde family in Ibadan and he is set to run under ADC. For decades now, he has run a very successful legal practice in Lagos but he has not forgotten his Ibadan roots.