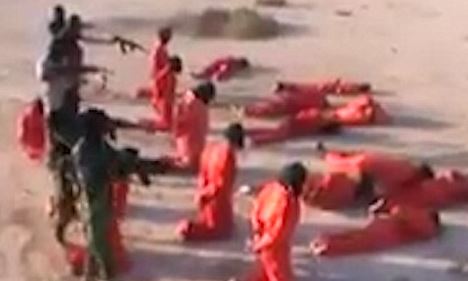 A new graphic video has emerged showing 18 prisoners in orange jumpsuits getting shot in the head from point-blank range in mass executions in Libya.

The men are reportedly ISIS fighters and in the video, they are shown kneeling in four rows facing away from their killers.

The video shows the executioners walking up slowly behind their targets before firing a spray of bullets from semi-automatic assault rifles into the backs of their heads.

The video shows all 18 men in orange jumpsuits falling to the floor after being shot and according to Libyan Express the commander of the eastern Saiqa Force of Operation Dignity Mahmoud Al-Werfalli conducted the massacre.

18 ‘ISIS Fighters’ Shot In The Head During Mass Execution In Libya [Horrific] was last modified: July 25th, 2017 by Reporter