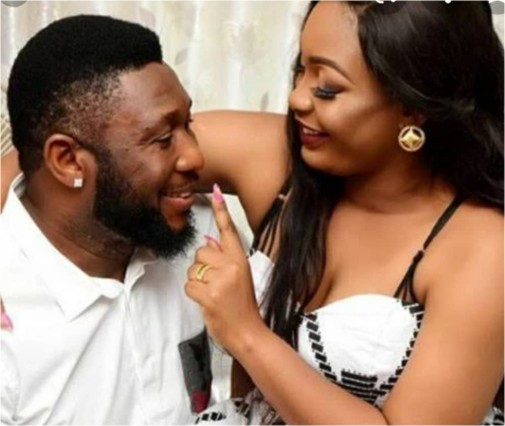 Nollywood movie stars are highly celebrated both home and abroad. Their fan basis due to their popularity and movies they feature in. A lot of these fans see them as mentors, also that everything about them should be perfect and devoid of any flaws. When they get married, their Unions is often seen as a marriage made in heaven. Most especially because of the way they celebrate their love and show off so much on social media.

It often come as a huge surprise when the relationship or marriage comes crashing like a bag of cement. Despite these, there are still some marriages in nollywood that many fans could vow for, that it can never crash no matter what especially because of how compactible the couple look together and the genuine love, they display on social media but after all said and done, they still crash due to irreconciliable differences.

Here are 20 failed marriage in nollywood, many didn’t see it coming, and many are still amazed at how it crashed and still hoping they will still settle and go back soon.

Let’s not forget that Tchidi Chikere was once married to Actress Sophia Williams and their union was blessed with three boys. The union crashed due to alleged romance between Tchidi Chikere and Nuella. And the couple went their separate ways. On May 29th 2014, Nuella married Film Director Tchidi Chikere in her family compound in Anambra State. Afterwards a white wedding was held in Lagos with lots of celebrities to attendance. Soon they welcome a baby girl together.

Many were very sure that their union will last till eternity, with their show of love and affection on social media. Few months ago, it went viral that their once sweet marriage was experiencing problems, but they both denied through a video shared on social media. Few weeks later Actress Nuella removed her husband’s name from her Ig’s biography and also went ahead to block him on all her social media platforms.

The film maker also confirmed the marriage break up through a post on Ig. According to him “Pain with leave once it is done teaching you, His grace has brought me this far, he is still with me” Also Nuella also have since moved and just acquired a car to surprise herself.

This particular marriage was one of the few many predicted it won’t last for long, but it came crashing earlier than many expected.  With their show of love and praises on social media. A lot of people concluded they might still enjoy each other’s company at least for 10 years  before it will break up. Recall that popular film maker Daniel Ademinokan was happily married to another pretty actress Doris Simeon, and their union was blessed with a cute boy. One can’t help but admire them at events and parties when they step out together. They always look good together, and the news of their break up came as a rude shocj to many as Daniel broke up with Doris and married Stella and they lived together in the U.S.

Few years later, the marriage between Daniel and Stella crashed to irreconciliable differences and all efforts by friends and family to save the marriage proved abortive. This no doubt is one of the most highly celebrated break up in the industry. A lot of Nigerians trolled Stella Damascus saying Karma has come knocking at her door. They also blamed for Doris failed marriage.

Actress Etinoso Idemudia’s second marriage ended barely before it started. The actress who tied the knot in September 2020 and welcome their daughter in December 2020 confirmed her marriage break up 6 months later.

He is among the top leading Directors in the Yoruba movie industry. He got married to his lover Funmilayo who happens to be a Make Up artiste and they met on location. The couple had an elaborate wedding with Mide Martins, Lateef Dimeji, Ijebu, Fathia Williams amongst others in attendance. A year after the marriage crashed. It was reported that the marriage started having issues almost immediately after the wedding ceremony as the bride’s mother took charge and started dictating everything that happens in the house until it led to the marriage break up. This took everyone by surprise because the couple looked too perfect with each other.

Emmanuel is a popular actor, model, singer, television personality and philanthropist and the former Mr. Nigeria. In 2019, the couple held their engagement ceremony in Lagos, while they tied the knot in March 2020. For those people who don’t know Anita Adetoye is a celebrity Make Up artiste and Makes Up for the likes of Toke Makinwa and lots of others. They both sparked the break up story after they took down their wedding photos from their respective Instagram accounts. And this is becomign barely a year after they walked down the aisle.

Blossom Chukwujekwu is one fo the finest actors in the industry who many love for his excellent role interpretations in movies. While Maureen Esisi is a popular Fashion Entrepreneur known as xxxx on ig with lots of fans and followers.

Their union was like that made in heaven. Blossom proposed to her on her birthday. They had a lowkey traditional marriage on the 19th December, 2015, while a glamourous white wedding followed on August 11, 2010. And the wedding was attended by many A-list stars in the society. They sure had a blissful marriage from the very start but unfortunately four years into the marriage, the rumour of their marriage crisis started going viral.

It was reputed that Blossom had moved out of his matrimonial home and even informed the ex-wife’s parents that he was no longer interested in the marriage. It was also speculated that there were reports that Maureen did not want to have children with Blossom and was taking birth control pills but she denied the allegation but rather that it was blossom who did not want children.

Finally, Maureen got to know about her divorce from her father in 2019. Even Maureen herself said she didn’t see the marriage crashing so soon, the way fans were surprised too.

Ekenedidlichukwu Eric popularly known as Ken Erics is a highly talented actor, film maker and singer. He is no doubt one of the finest in the industry, who interpretes roles so perfectly. He divorced his wife Onyi Adaba after only one year of marriage. It was reported the couple only dated for one month and there was no intimacy before they got married. On 28th December, 2017, the couple had their traditional marriage. The marriage started experiencing crisis but the couple kept their shit private but in March 2019, the Actor announced he was no longer interested in the  marriage due to some irreconciliable differences he has with his partner. According to him, the marriage was not working and he decided on annulment.

Everything seemed perfect between them before the break up. After the break up, the wife made some shocking revelation about the actor, that he doesn’t sleep with her, before and after the marriage, therefore he is gay, not to have slept with his married wife throughout when they were married. Their marriage breakup news came as a rude shock to many considering Ken Erics cool and calm nature, and blessed with the attributes of every girl’s dream man.

Marriage they said takes patience, love, trust, understanding, tolerance, support, prayer, and much more to work. Popular Actor Mofe Duncan’s marriage break up is one that many never saw coming. Despite being a talented actor, he is one that has this very calm and cool nature, and he is devoid of any scandal in the industry, neither has he been linked with lots of women like many of his contemporaries in the industry. Their marriage break up is also one of the few that didn’t even lots of drama on social media. The news went viral and the couple confirmed the story through different post on social media. According to him “My marriage has been voer for over a year as I have remaine cordial with both families and would continue to remain cordial God guides me”. There was no form of drama on social media by this couple and have since moved on.

This particular couple is one of the most admired couple in Nollywood. They both looked too perfect together, met on the set of Mnet series Tinsel and got married. Many concluded the union will last forever while there are still few who feels Gbenro married Osas for his papers. The duo started up as friends and later dated for almost three years before taking their marital vows in 2015. Their flamboyant and fairytale wedding took place in 2015, but unfortunately the love they once shared started fading away after they welcomed their daughter together. Gbenro called out Osas several times on social for deglecting her responsibilities as a mother. They got married in 2015 and ended the marriage in 2019.

Nollywood pretty actress Yvonne Jegede married popular actor Olakunle Fawole son of late actress Bukky Ajayi in a simple but classy wedding ceremony in Lagos in February, 2018. Few years into the marriage separation runour started trailing the once highly celebrated marriage. It was also reported that Yvonne had moved out of their matrimonial home. Few weeks later, the actress granted an interview on pulse to confirm the marriage break up. According to her, “she quit the marriage three months after she got pregnant with her son”.

It was also reported that the marriage broke up due to the alledge stories regarding the paternity of her son. The couple have since moved on while Yvonne is living happily with her son.

Why DJ KULET Is The Toast Of...