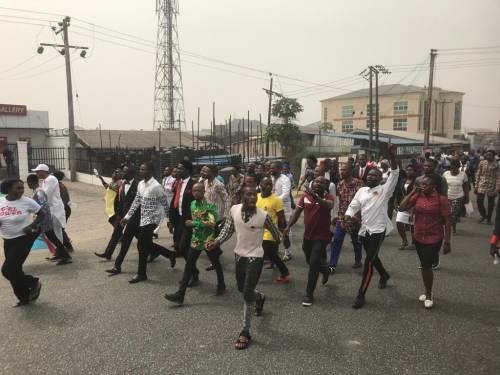 Members of the All Progressives Congress (APC) in Bayelsa State have taken to the streets of Yenagoa, the state capital, to protest Thursday’s ruling by the Supreme Court in Abuja nullifying the victory of their candidate, David Lyon, during the November 2019 governorship election in the state.

The apex court went on to declare candidate of the Peoples Democratic Party, Diri Douye, as authentic winner of the exercise.

The court, in a unanimous decision by a five-man panel of justices led by Mary Odili, held that Lyon’s running mate in the election, Biobarakuma Degi-Eremieoyo, presented a forged certificate to the Independent National Electoral Commission, and therefore forced it to disqualify the joint ticket that produced them as initial winners.

But angered by the development, the APC members barricaded major roads in Yenagoa and burnt tyres to register their displeasure at the ruling.

The party’s secretariat has since been cordoned off by security operatives as APC members in groups continue to make threats and chant ‘war’ songs.

The entire city is currently tensed as nobody knows what could follow next.

What Queen Of Gospel Singer, TOPE ALABI & HUSBAND Said About Her Dad