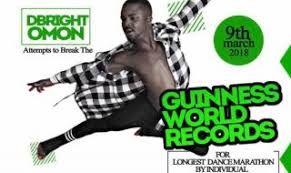 Michael Bright Ifeanyi, a Nigerian dancer, is attempting to break the world record for the longest dance marathon by an individual.

Ifeanyi, also known as Bright Omon, is seeking to outdo a record believed to have been broken by odumewu Debbie a.k.a Pinki Debbie

The 22-year-old Debbie had performed for seven days, eclipsing the former record of 123 hours and 15 minutes (approximately five days) by India’s Kalamandalam Hemaletha in 2010.

It is not known if her attempt has been officially recognised by the Guinness World Records.

A check by TheCable Lifestyle on the Guinness World Records website showed that Hemaletha still appears as the record holder.

Ifeanyi, the new challenger, began dancing at the Maryland Mall, Lagos, on March 9 and is expected to wrap up his attempt on March 17.

He hopes to dance for eight straight days.

When he started his record-breaking quest, he invited Nigerians to the Maryland Mall to join him and offer support.

“Come dance with me as I attempt to break the Guinness world record for the longest dance marathon… put does dancing shoes on because I can’t do this without you as we are all officially going to be record holders,”

feanyi receives daily massages to keep him going and he has also been visited by a number of celebrities, including Kafayat Shafau, a dancer better known as Kaffy.