At The City People OGD Lecture In LAGOS 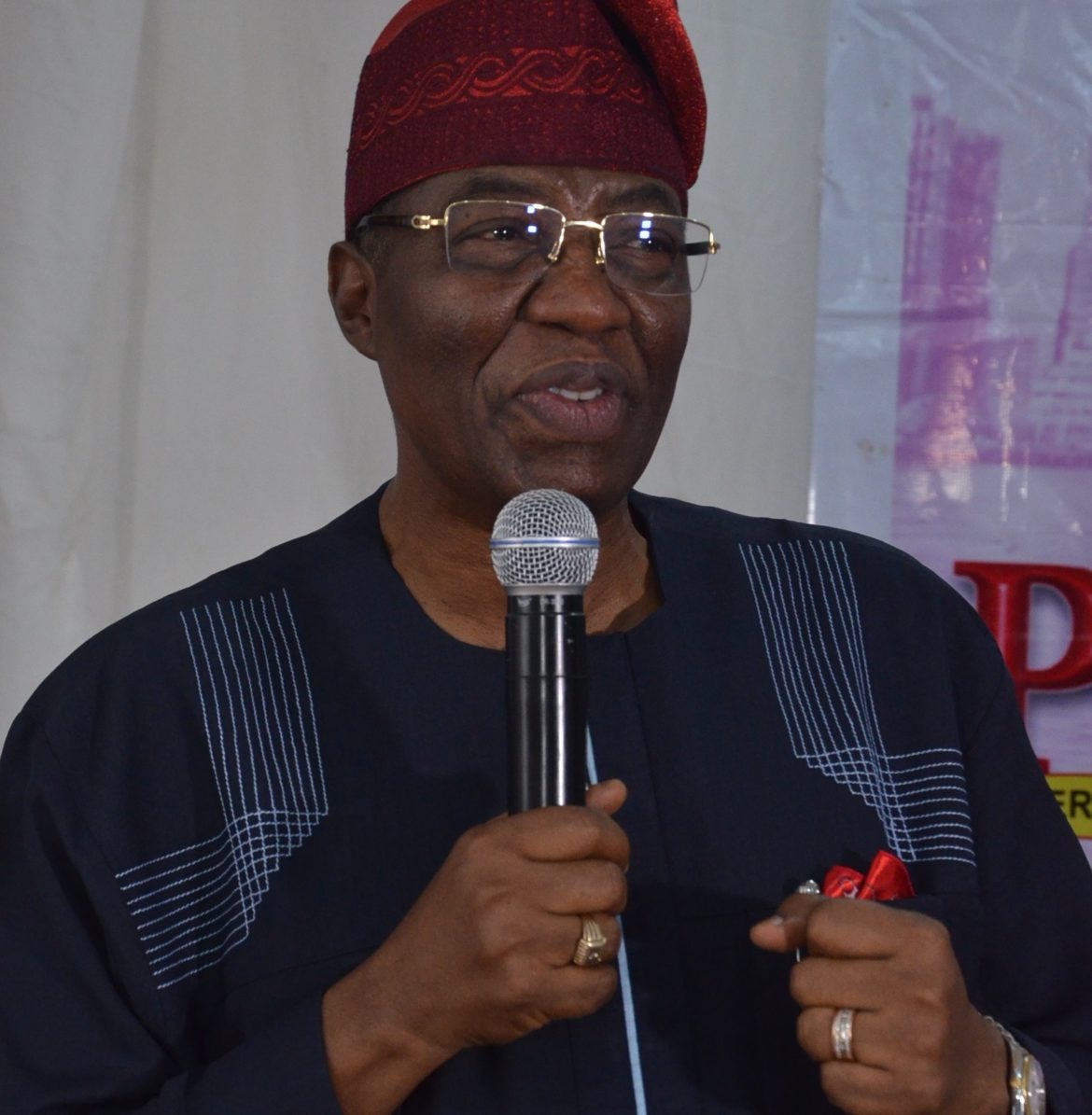 Saturday, November 24th, 2018 will for a long time be celebrated by hundreds of people who were schooled by a former two-term governor of Ogun state, and the Director-General, Atiku Campaign Organisation, Otunba Gbenga Daniels (OGD), at the 22nd City People Magazine anniversary lecture entitled: The Bumpy Road to 2019. The event which held at the City People event centre in Gbagada, Lagos, revealed the unknown and less talked about of OGD put out of his busy schedules left several other functions on hold to ensure that he not only stood by his words to be at the occasion but also did it punctually.

At about 3:00 pm when the lecture was proposed to commence, OGD and his entourage had punctually found their ways into the hall while many of those who came to listen to the intelligent and impactful delivery from the former Lecturer at the Lagos state polytechnic (LASPOTECH) were yet to take their seats, a proof that he is not just a time manager but also punctual; an attribute that is not so common among most Nigerian politicians.

The OGD I Know: Accolades From Various Individuals

Before the business of the day fully commenced, the event anchor, Mr Wale Lawal, a  senior Editor at City People gave some of the guests already seated an opportunity to say few words about OGD, and most people had something to say about the ace politician. However, only ten people had opportunities to talk and they all at some point in their lives have had a beautiful encounter and remarkable experience with OGD. Barrister Tunde Otaiye, Engineer Adeola Sosanwo, Mr Kunle Sokunbi, Hon Onadeko Omamusi and Hon Kayode Amusan all talked about how OGD had at one point or the other served as a messiah for their political careers.

City People Publisher, Dr Seye Kehinde in his welcome remarks talked about how he met OGD shortly after he became the governor of Ogun state and noted that he has since then really been helpful in all spheres. He further noted that the very significant for City People as it marked exactly 12 OGD declared the magazine complex opened.

Speaking further, he  revealed that OGD has been very consistent with everything he does and that he is a very structured individual and leader, which was one of the qualities that stood him out as the right speaker at the magazine’s annual lecture series especially as the election year is gradually drawing closer.

“OGD brought his empirical and scientific skills into governance and politics and has also given governance in Nigeria a human face.

“On behalf of the management and staff of City People, I want to say very big thanks for everyone who has made it down here today for this year’s annual anniversary lecture, especially those who accompanied him and others who came on their own to be part of this great day to listen to OGD talk to us on the” bumpy road to 2019, thank you. he concluded.

Akogun Tola Adeniyi Is the Chairman of the Day

Akogun Tola Adeniyi was a former Managing Director of Nigeria’s foremost newspaper, the Daily Times newspaper who delivered a very short but concise speech to whet the appetite of the audience before the main speaker took over.

Speaking about OGD, Akogun Adeniyi said “OGD was my boss and governor, he was my chairman on many occasions but today I’m ‘charimaning’ him.

“What people know about OGD is that he is a successful engineer, politician and master strategist but what they don’t know is the depth of his intellectual capacity, his robust ability and capability, awesome will power, his criticism and organisational skills. I am more convinced that OGD is more than able to do justice to the topic at hand, the bumpy road to 2019 election.”

He, furthermore, shed light on how various structures have been put in place across the nation by some self centred politicians in other to ensure that the road to 2019 works against the progress of the country but in their own favour.

“The road to 2019 has been manned from day one by the controlled military, controlled police, controlled agencies, controlled electoral body, by the judiciary, by the civil service, and by all those agencies that ordinarily should be independent and free of interference for smooth operation of the systems in the country. The 2019 presidential election is not between civilians and civilians, rather it is between a military government pretending to be civilian in nature and a democratic, civilian people who are trying to win the country back.”

OGD Delivers Lecture On Nigeria: The Bumpy Road To 2019

Otunba Gbenga Daniels proved himself to be a very fantastic lecturer and engineer indeed as he started his talk by defining a key word “bumpy” which he says will help in looking at the road to 2019 in its true light as not being straightforward, consistent, smooth as one would have expect it to be after 20 years of uninterrupted democracy. In his words, “ladies and gentlemen, in addressing this very topic which was made tricky by the word ‘bumpy’ suggesting some kind of undulations, infrequent bumps of varying heights, on the way to the 2019 election, I will be looking at Nigeria as a concept in four different ways i.e. as a country, a nation, an idea and a project.

Nigeria As A Country and As A Nation

OGD took his audience back in memory lane as he discussed how different nations in the Niger area were amalgamated by Sir Lord Frederick Lugard in 1914 when he joined the Southern and Northern protectorates for easy governance because of lack of man power and the unwillingness of the Britons to spend money.

“We need to be cleared on some terms. Severally, Nigeria has been described as a country, at other times as a nation. We need to interrogate these descriptions closely so as to determine if we are in any way near our destination politically and socially.

The New Webmaster Comprehensive Dictionary of the English language defines a country as:

“A land under a particular sovereignty or government, inhabited by a certain people, or within a definite geographical unit. A particular nation or the institution peculiar to it, the land of one’s nativity or allegiance”. “A tract of land of indefinite extent, a region as well as “A rural region, or farming district, as opposed to the city.” .

Nigeria As An Idea

OGD went in all details to saliently deliver his points in differencing a country from a nation with various examples but he didn’t stop there; he went further to describe Nigeria as an idea from inception to the current times. He said “Though Nigeria as an idea has its foundation in administrative convenience; it has evolved in the course of time to becoming a work-in-progress, a complex social experiment”.

He further said: “To be precise, from the British perspective, Nigeria was a corporate idea for an administrative convenience and not a planned design to evolve into a nation. The intense diversity at independence was far too wide and sharp to contemplate such; even several of the country’s leaders at independence agreed on this; quoting from Abubakar Tafawa Balewa and Chief Obafemi Awolowo.

“Since 1914, the British government has been trying to make Nigeria into one country but the Nigerian people are historically different in their backgrounds, in their religious beliefs and customs and do not show themselves any signs of willingness to unite… Nigerian unity is only a British invention.” Abubakar Tafawa Balewa – 1948

“Nigeria is not a nation, it is a mere geographical expression. There are no Nigerians in the same sense as there are ‘English’, ‘Welsh’ or ‘French’. The word ‘ ’ is merely a distinctive appellation to distinguish those who live in within the boundaries of Nigeria and those who do not.” – Chief Obafemi Awolowo 1947

Even the Sultan of Sokoto, the first premiere of Northern region, after travelling to Lagos for the first time in 1949, observed:

“The whole place was alien to our ideas and we found the members of other regions might well belong to another world”.

Nigeria As A Project

Discussing Nigeria as a project, OGD who has two doctoral degrees in development administration and agriculture left his audience spell bound and glued to their seats as he enlightened them, painting a picture of Nigeria without class barrier, ethnic bias, religious differences, literate and illiterate group, urban and rural people and rich and poor citizens.

He said: “the defining character of this new paradigm was that people are more united in the brotherhood of economic prosperity and poverty than in kith and kin. Recourse to the sentiments of ethnicity and religion are only weapons of prosecuting economic warfare and politics. To build a nation therefore, the government must and should as a matter of urgency focus on building economic prosperity of the citizen. They are likely to be united in happiness when they can have access to good education, good healthcare, employment which guarantees their self actualisation, a feeling of security which increases their self estee.”

OGD in his mastery of words and charm of delivery concluded that what we have been searching for over the years is to find Nigeria as a nation, the things that unite us, how we can live together sharing our differences in culture and perspectives and deriving a strength from this diversity. It is only if we are able to do these that Nigeria as a practicable idea could be realised not as of convenience or administrative units. “This is the project Nigeria which I am proud to report to you today is what the whole essence of the Atiku Abubakar’s quest to serve Nigeria is all about”.

Contributions From The Audience

At The City People OGD Lecture In LAGOS was last modified: December 3rd, 2018 by Damilare Salami

How Sibling Rivalry Can Affect Your Mental Health