What Buhari Discussed with Ojukwu in Daura in 2013 – Chekwas Okorie 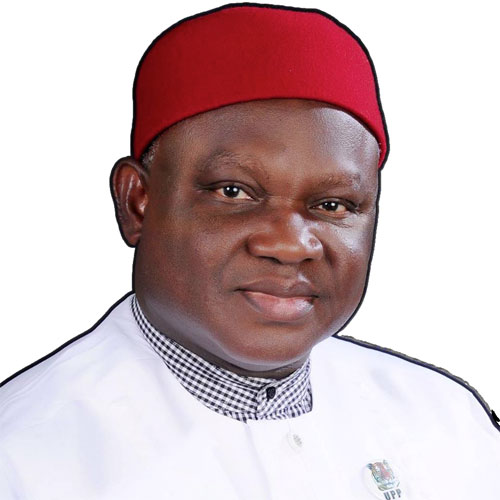 While speaking in an exclusive interview with Vanguard newspaper, the national chairman of the United Progressives Party (UPP), Chief Chekwas Okorie, opened up on contemporary issues heating up the polity.
Here are the excerpts:
The President in a recent broadcast recalled with nostalgia his meeting in Daura with Dim Odumegwu Ojukwu before 2003. As an associate of the late Igbo leader what can you say of that broadcast?
First of all, I was the chairman of Odumegwu Ojukwu’s political party, that is, I was the chairman of APGA that fielded the late Odumegwu Ojukwu as a presidential candidate; so I can tell you authoritatively that I was privy to that meeting in Daura.
I was not there physically but upon his return he gave me a copy of the communiqué. It was not an agreement as such. It was a communiqué actually and that visit was to reciprocate an earlier visit that Gen. Buhari paid to him at Enugu, accompanied by late Dr. Chuba Okadigbo who was his running mate at that time.
And he reciprocated that visit by going this time with Dr. Tim Menakeya because I was very busy with party matters and then, they had to go. Yes Gen. Buhari was not entirely out of place about what had transpired but the word “non-negotiable” was never used.
As I said it was a communiqué which two of them signed. The key words in that direction were that they called for Nigerian unity, oneness and indivisibility and in this unity, oneness and indivisibility; it will be anchored on justice, equity and fair play. The word non-negotiable was never used and it did not appear in that communiqué whose copy I still have.
Having said that the late Odumegwu Ojukwu has never believed in the kind of unity that Nigeria has and he variously described the unity we have in Nigeria, as the unity of Jonah and the whale; that Jonah was in the belly of the whale, a very dark environment, very uncomfortable and the whale carried him and you wouldn’t call that unity. He always wanted a unity where everybody would breathe the same air of freedom, the same air of justice, of liberty and of equity.
I want everybody to know that I am talking authoritatively outside of politics. I had a very close liaison with late Odumegwu Ojukwu for 22 years and there are so many things that he said repeatedly that I can very easily quote him on word for word.
IPOB as a group is apparently bent on secession. As an Igbo man, are you worried by that?
My younger ones are so aggrieved to say they want secession, they want Biafra. They are expressing their views but if Nigeria will do the needful to carry out what we are talking about, restructuring of Nigeria. If we have a system in which these ethnic nationalities have a sense of self determination within the context of Nigeria, I don’t think anybody will be talking about secession. Maybe the younger ones don’t understand it, the Fulani are the newest entrants into the Nigeria geographical space.
They came about 200 years ago and in the year 2000 they celebrated the bicentenary of the existence of the caliphate. But in that same year 2000, I was the special guest of honour at the Igbo Cultural Day in Gusau Zamfara State and it was there that I found out that an Igbo settlement that had been there for about 400 years, 200 years before the coming of the caliphate of Usman Dan Fodio.
So, if they had been two centuries before the Fulani came, who is an indigene and who is not? And it is not only in Gusau, go across the country, you will find out that there had been inter-marriages, cultural exchanges, trade exchanges for several centuries before the white man came.
Before the British people came, the Portuguese were around and the Portuguese had their own map of Biafra, a map that was drawn in 1467 in the 15th century and then the Zamfara Empire and the Benin kingdom. Where you call  Yoruba land now was under the Benin kingdom; there was the Bight of Biafra, there was the Bight of Guinea, there was Bight of Benin.
It was only in 1974, just four years after the civil war in Nigeria, that the Nigerian military government changed the Bight of Biafra name to Bight of Bonny, all in the attempt to distort the history of this country. So I can relate with those who say that yes there is an indigenous Biafra population that existed centuries back. But for a geographical area called Biafra to be excised from Nigeria which means secession, is a bloody venture and I would join late Odumegwu Ojukwu to say it is not recommended.
But restructuring of Nigeria, self determination, if they don’t want it to be done by consensus, we will do it politically, democratically because if we vote for those who believe in that ideology and lobby those who believe in it but don’t have the numerical strength to implement it and you end up having about four geo-political zones or more key into it, then you will be able to pass the necessary legislations to bring it about without firing a shot and that is my own approach.
What Buhari Discussed with Ojukwu in Daura in 2013 – Chekwas Okorie was last modified: October 6th, 2017 by Arinze Ago