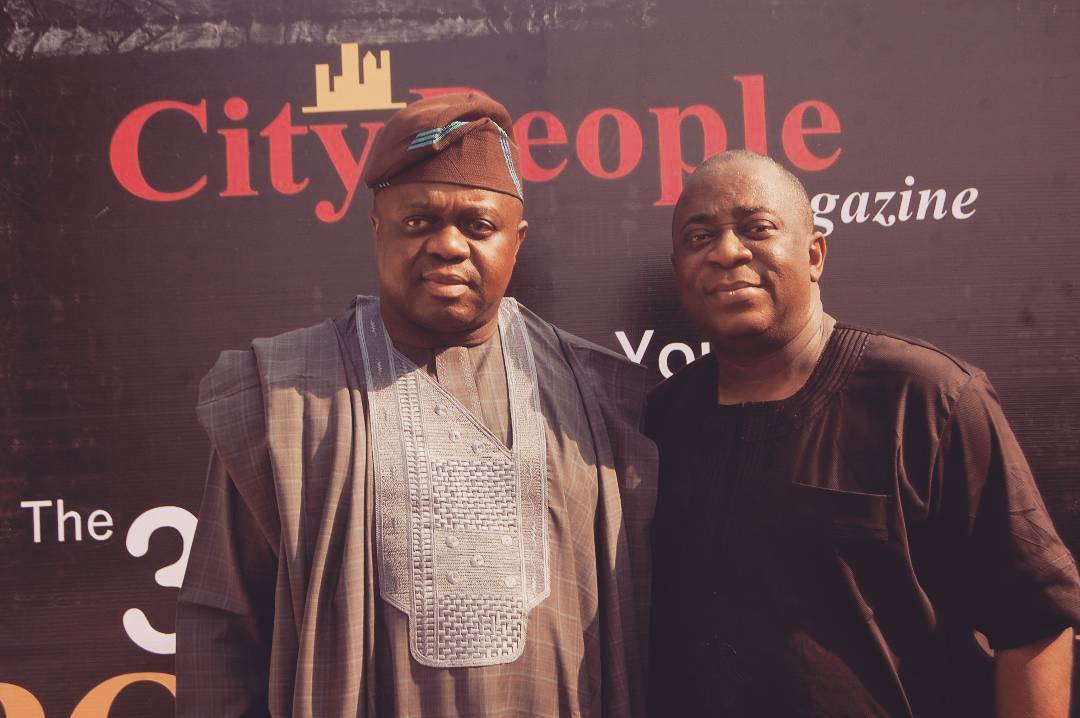 The 3rd edition of the City People Political Awards was held at Balmoral Event Centre, Kudirat Abiola Way, Oregun-Ikeja, Lagos, on Sunday, 26th November, 2017. And as usual, top politicians from across the country were present, fully represented, at the award event which has become the benchmark for measuring politicians’ performance in Nigeria. Music was by Sir Shina Peters. In this report, SAHEED OJUBANIRE brings you the blow-by-blow account of the awards that brought top political players from opposing political parties under the same roof, for hours, without the atmosphere getting heated, but rather; they remained seated around one another all through enjoying presentation of  every award  at the ceremony. Please read on:

On-Air-Personality, Seun Oyedeji, better known as Seun Jewel was the host of the award. And the buxom lady was like a 2-in-1 host as she gave all the right ingredients that a top-notched event deserves at the appropriate time.

While she spoke English mainly, she kept spicing it up with a bit of Yoruba which further took her to infusing some words in Egba, her native dialect into her expressions when  the occasion demanded  all that. And again, her sense of humour was very commendable, while the event lasted. She really achieved what  two hosts would have struggled to bring to the table all alone. She looked so glam in her long wine colour ensemble.

Without further ado, the awards presentation started immediately after the publisher’s welcome address. And the first award of the evening which was for Senator of the Year  was presented by Dr. Seye Kehinde  and it went to Dr. Bukola Saraki, Nigeria Senate President! And it was said to be in recognition of his outstanding performance at the Senate.

To pick the award for Dr. Bukola Saraki, Senator Lanre Tejuosho was on hand, and in responding to the honour done the Senate President with the award, Senator Tejuosho asserted that it was the “first time the senators would have our independent President in Nigeria.” And added that, there was no way that would have happened without it being turbulent, but happily, they were still on 2 years after. He concluded by thanking the management of City People Magazine on behalf of the Senate President for the recognition.

Still presented by Dr. Seye Kehinde, the next award was for The Politician of the Year, which went to Alhaji Atiku Abubakar,  One of his sons, Alhaji Aminu Abubakar,  came to pick the award for him. And he dedicated it to Nigerians.

The third award of the evening also presented by City People Magazine’s publisher was for The Grassroots Politician of the Year and it went to Ogbeni Rauf Aregbesola, the Governor of Osun State. To receive on his behalf his Senior Special Assistant, Dr. Adeleke Ipaye, was present.

And after receiving the plaque for his principal, Dr. Ipaye said the governor himself would have loved to come in person, but they were in the thick of celebrating the governor’s 7th year in office in Oshogbo and the governor was tied down with the event.

For her commendable performance in politics, a Special Recognition Award in Politics was presented by Dr. Seye Kehinde to Phar. (Mrs.) Uzamat Akinbile-Yussuf, the Commissioner for Youth and Social Welfare in Lagos State, who is sensationally referred to as “Moremi” by her political followers in Alimosho was present to pick her award. And to them, “Moremi” is said to mean the woman who has come to liberate them. She dedicated the award to her people.

After SSP’s performance, presentation of awards resumed with a Lifetime Achievement Award for Otunba Henry Ajomale, who was represented by Com. Ayodele Adewale, a former chairman of Amuwo-Odofin LCDA. The award was presented by Princess Abisoye Adedipe, the Regent of Osolo in Isola,  Akure.

The next award was a Special Recognition Award in Politics for Senator Ganiyu Olanrewaju Solomon. The Senator, who received it himself from the Regent said he had received many awards from City People in the past, but the one he came to receive on the day was in another category. He dedicated it to the people of Lagos.

The Orile Agege Local Council Development Area Executive Chairman, Hon. Johnson Sunday Babatunde emerged as the LG Boss of the Year. He was on hand amid a retinue of his people to pick his award which was presented by the Regent of Osolo in Isolo in  Akure.

HON. ONYESOH IS SOUTH-SOUTH GRASSROOT POLITICIAN OF THE YEAR

The South-South Politician of the Year Award went to Hon. Allwell Onyesoh. The award, which he picked up personally was also presented by the Regent. He said if he was occupying a political office at the moment, he would have thought the organizers wanted something from him. But since he was not in office and the organizers did not ask for a dime from him before giving the award, he so much appreciated it.

The Governor of Kwara State, Abdulfatai Ahmed, emerged  the North-Central Governor of the Year. And his award, which was presented by the Regent was picked up for him by a representative.

SSP was at his best. The ageless musician dazzled, as he eulogized top politicians in the audience some of whom went on stage to dance with him and tucked crisp Naira notes in his pocket for his commendable efforts.

Hon. Tunde Braimoh was presented with a Special Recognition Award, which was handed to him by Dr. Seye Kehinde. In his response, he said it was special because he was not asked for a dime for the award despite the fact that they spent money to put the event together, he also thanked the organizers for the honour.

Kwara State governor, Ahmed Abdulfatah, also emerged at the Best North-Central Governor of The Year. The award was picked up on his behalf by Kwara State’s Commissioner for Information, Mr. Mahmud Babatunde Ajeigbe who thanked City People for recognizing and Honouring his principal, Governor Ahmed Abdulfatah for the good job he’s doing in the state.

The next award of the evening was a Special Recognition Award in Politics, which was presented to Princess Aderemi Adebowale. She received the award herself and dedicated it to Governor Akinwunmi Ambode. She was one of the LGA Sole Administrators in Lagos given the opportunity by the governor.

IS HOUSE OF REPRESENTATIVE MEMBER OF THE YEAR

Represented by Mr. Bayo Ayo, Hon. Abiodun Faleke won the award of House of Representative Member of the Year. His representative thanked the organizers on behalf of the Honourable Member for the recognition.

Former governor of Ogun State, Otunba Gbenga Daniel (OGD), got a Lifetime Achievement Award presented by Dr. Seye Kehinde, which OGD came to pick up personally. After the plaque was presented to the former  governor who is currently in the running for the position of National Chairman of PDP, he thanked the people who went on stage with him to receive the award, especially, Senator Iyiola Omisore, who he referred to as the incoming governor of Osun State, as well as Rt. Hon. Titi Oseni Gomez, a former Speaker of the Ogun State House of Assembly and her husband. He also thanked the organizers for the honour before dedicating the award to “all struggling politicians, who want to change the change in 2019.”

Immediately after OGD, the next award to be presented was a Special Recognition Award in Politics for Senator Iyiola Omisore which was handed to him by the publisher of City People Magazine. And as OGD and co joined him on stage to identify with him over his award, the ex deputy governor of Osun State sensationally referred to OGD as the incoming National Chairman of PDP, which drew sound of approval from the supportive section of the audience. He thanked the organizers of the event for the honour done to him before leaving the stage.

The last award of the evening went to Chief Adebayo Alao Akala, a former governor of Oyo State and it was for Lifetime Achievement in Politics which was picked up on his behalf by his son, Olamiju Akala, who is the Chairman of Oyo’s biggest Local Govt.

SSP BROUGHT THE EVENT TO A CLOSE

After all the awards for the evening had been presented, SSP returned to the stage for the third time to round off the event with a fantastic performance as guests took their leave.